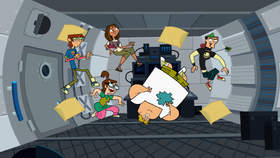 Harold
The show lifts off as the cast competes in space-themed challenges in order to win immunity. Two cast members start to feel a strain on their recently made alliance, and another still can't shake off his guilt. After a number of calculations, someone believes that there is a traitor among the cast, but he is unable to warn the other remaining castmates before being eliminated.

The episode opens during the middle of the night, with Chris abruptly waking up the castmates. He greets them, and tells them that they have all been sent something from the outside world, later giving a package to each castmate. Owen receives a trophy that he won for being a good citizen, which makes him feel guilty, due to his new role of saboteur on the show. Courtney receives a photo of her winning a debate all by herself because her partner on the debating team didn't want to work with her, Harold receives his nunchucks from the previous season, Beth receives a "promise" candy ring from Brady, and Duncan receives his pet tarantula, Scruffy. Next, Chris tells everyone to meet him at a different location for the next challenge. Once they get there, he tells them that they must spend the rest of the night riding in a space simulation roller coaster.

The group enters the "space ship," and they sleep in zero-gravity until they are woken up by an alarm. The alarm tells them that they need to fix the ship's navigation system, and to do so they must reach a joystick. Unable to reach it himself, Duncan decides to throw Harold at it instead, and Harold is able to repair the system. Meanwhile, as the castmates compliment Harold's quick work, Owen floats near a window, trying to find a way to fulfill his duties as a secret mole. He then notices Harold's nunchucks floating by him, and quickly grabs them, using them to break one of the spaceship's windows. The uncontrolled decompression starts sucking everything out of the spaceship, including their oxygen supply. Chris tells them that they have several minutes to fix or plug up the broken window, or else they will run out of oxygen, so Beth and Courtney come up with the idea to use Owen to fill the hole. When they safely depart the spaceship, Chef declares that their idea of filling the hole with two pillows is smart, then pats the "two pillows" happily. Chris informs him that the "pillows" are actually Owen's butt, and Chef is then seen in the confessional shaking in terror.

Since Beth and Courtney, the "Girls' Alliance," were the ones to use Owen as the solution, they get to choose the order for the next part of the challenge. Without consulting Beth on possible options, Courtney decides on the order: Harold, Owen, Duncan, Beth, and then herself, so she can watch and improve on all of their mistakes.. After they find out that the next challenge is to ride the "Vomit Comet," Courtney tries to take take back her decision, but it is too late, which angers Beth.

Harold rides first, but accidentally ends up entering the ride with Scruffy attached to his shirt. Harold then asks to leave the ride after only riding a few seconds, and loses the challenge. Duncan asks Harold where Scruffy is, where upon Harold then turns around, and Duncan sees Scruffy crushed to death on his back. Heartbroken, Duncan mourns his beloved pet's death, while Courtney comforts him, which makes them closer. In the confessional, Duncan states that he is upset over his loss, but also happy, since now he doesn't have to sleep with a baseball bat under his pillow in case Scruffy attacks him in the middle of the night. Owen rides next and ends up leaving early as well, but not before farting inside the ride, due to Chef Hatchet's chili. Duncan is disgusted as he enters the ride because of the horrible smell. He ends up being the first one to vomit the chili they ate for lunch, and manages to stay in the longest so far (but gets ten seconds off his time for vomiting). Beth goes next, still upset that she is going so late, and that the ride has already been soiled. She refuses to stick with Courtney with not participate at all. Beth manages to stay in longest, with thirty-six seconds. Beth exits the ride and kisses Harold, due to the fact that she assumes that he has feelings for her, when he does not. Harold is disgusted when she then dumps Brady, and tells Harold that she wishes to date him. Meanwhile, Courtney is upset that Beth did not go along with her plan, and ends up forfeiting, allowing Beth to earn invincibility.

The scene then cuts to Duncan and Harold sitting outside the girls' trailer as Beth and Courtney argue. Inside the trailer, Beth and Courtney fight about Beth's choice in the immunity challenge, which leads them to break up their alliance and each decide to compete alone for the rest of the game. Meanwhile, Harold finds Owen in the film lot. Harold then explains to Owen that he is suspicious of him, as Owen was the only castmate not accounted for when the window broke on the spaceship. Harold tells Owen that he knows he is a traitor, but Owen denies the accusation and repels Harold with his excessive farting.

At the Gilded Chris Ceremony, the castmates are seen voting. It is revealed Harold voted for Owen, Beth voted for Courtney, and Owen and Duncan voted for Harold. Courtney is the only one who does not imply to the camera whom she is voting for, saying that she should have the right of privacy. The first Gilded Chris goes to Beth, then Owen and Duncan. Courtney and Harold are the bottom two, with Harold being sent home. As he leaves, he pulls down Duncan's pants, which Duncan admits he had coming. Harold then shouts to the other castmates that Owen is a traitor, and that they should watch him like a hawk. He quickly changes his mind, and says that they need to watch him like a falcon, as they have better eyesight than a hawk. Beth mentions that she will "wait for Harold," much to his dismay. Chris then signs off the show and Harold is driven away by the Lame-o-sine.

Harold, in the Lame-o-sine, says he is proud of himself for making it to the final five. However, he is angry that Owen still remains in the competition, despite being a traitor. He then mentions the time he accidentally shot his principal with an arrow, resulting in a few years worth of detention. He believes that he is the "leader" of the bad students there, as they let him finish their homework. He wonders how they will they react when they find out that he almost got a girlfriend, but then contemplates whether or not he should tell them that it is Beth.

Harold admits to having filled Duncan's mattress with rocks.

Chris announces the space genre, in his caveman outfit.

"What was your first clue, genius?"
- Courtney

Beth is oblivious to Courtney's sarcasm.

Beth excited at taking part in a sci-fi movie challenge.

Duncan and Harold get their presents.

Courtney gets emotional after seeing her present.

Courtney's present: A picture of herself winning a debate.

Owen's present: A trophy for being a good citizen.

Owen tears up after receiving his trophy.

Beth's present: A candy "promise" ring from her boyfriend, Brady.

Harold hits himself on the head with his own nun-chucks.

The "spaceship" in which the first part of the challenges takes place.

The contestants sleep in the spaceship simulator during their challenge.

Beth believes that Harold is crushing on her.

Owen panics when the spaceship malfunctions.

Owen throws Harold's nun-chucks out the window in an attempt to sabotage.

Duncan, Scruffy, Courtney, and Harold after they escape from the roller coaster spaceship.

Beth flirtatiously asks Harold if he's going to help her down the ladder.

The cast mates walk to the Vomit Comet in a sequence.

Beth celebrates a victory for the girl alliance, though Courtney is not as relieved.

Courtney decides the order for the challenge.

Chef patting on the "pillows" the girls used.

A dizzy Harold stumbles into Beth's arms which she mistakes for a hug.

Scruffy crushes into Harold's back in the Vomit Comet.

Owen while in the Vomit Comet.

Owen unable to stand up after his turn.

Duncan tears up due to the smell of Owen's fart.

Duncan takes the meaning of a Vomit Comet too literally.

Duncan admits that the Vomit Comet helped him get relieved of his back pain.

Courtney threatens Duncan after he pukes in the Vomit Comet.

The cast mates after Duncan pukes in the Vomit Comet.

Beth mad at Courtney for making them go last.

Beth decides to compete in the challenge rather to stick with the Girl's Alliance.

The cast after viewing Beth's turn in the Vomit Comet.

Beth breaks up with Brady to be with Harold.

Beth kisses a shocked Harold, when she believes he likes her.

Courtney ends the Girls' Alliance after a fight.

"I, too, love a good catfight. But one with real cats, who wear tiny boxing gloves."

Harold confronts Owen about being a traitor.

Owen farts his way out of telling Harold the truth.

The final five at the Awards Ceremony before casting their votes.

Harold is eliminated from the show.

Harold gets his last revenge on Duncan for the season by pantsing him.

Harold final warning to the remaining contestants about Owen.

Retrieved from "https://totaldrama.fandom.com/wiki/2008:_A_Space_Owen?oldid=1644251"
Community content is available under CC-BY-SA unless otherwise noted.