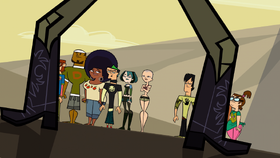 Trent
The teams compete in Western-themed challenges, as one of the contestants keeps throwing the game for another contestant from the opposing team. Shortly after, their relationship ends after the boyfriend confesses him throwing the game. A schemer from the other team finds out about this and blackmails the goth from into voting off her ex.

The episode opens with the castmates struggling to keep cool in the intense heat wave outside. Heather and Leshawna sit in a bench with an umbrella over them; Lindsay and Beth sit on the stairs of their trailer, under its shadow; and Harold stands on the window, complaining about how hot it is to do anything, but is tired to finish his sentence.

Owen fans a palm leaf for Justin, who asks him to go faster. DJ, panting under the sun, sits inside a small inflatable pool, and Duncan is sitting in the other bench with his feet inside a bucket of water. Gwen and Trent are sitting under the shadow of a tree, and Gwen manages to develop a cold, prompting Trent to try and cheer her up, and he lets her drink from his water bottle. Unfortunately, he makes things awkward when he incorporates his obsession of the number nine by wiping off his water bottle nine times after she drinks from it.

Chris arrives in a cowboy outfit, announcing the day's challenge will a Western-themed challenge, telling the contestants that he'll meet them in the town at noon and to "be there or I'll drive you deadbeets out of town!" Lindsay misinterprets this and asks that, since they're going out of town, if they could go to the mall.

The castmates stop at the set of an old western movie, where they are given their first challenge: they must jump onto a horse from a hundred-foot high diving board. Beth asks what about the "pretty dames," but Chris just says that they hang out in the saloon during the bar brawl, to which Harold reacts excitedly, trying to show off his boxing moves but trips into a large container of water, amusing Duncan.

An annoyed Chris asks Chef if the farting horse was the best one they could afford, and Chef reminds him of the luxuries he affords with their budget.

Since the Screaming Gaffers won the previous week's challenge, Chris forces them to go first because he says so. Before they begin, Gwen sneezes and believes she has more than a just a cold, obtaining Duncan's approval for help if needed, to which Trent tells the Gaffers that Gwen was really sick and that, "In her condition, she'd probably fall off the platform and land on the horse," covering his mouth as he realizes his mistake.

As Gwen begins to climb up the ladder, Duncan jokingly tells his teammates that they will probably need a new leader, which Gwen overhears, making her more exasperated. Once she gets to the top, she suddenly decides not to jump. Trent tries to wish her luck by telling her to "break a leg."

However, when Gwen turns around to climb back down, she sneezes hard, the force of which pushes her over the edge.

Though Gwen manages to land on the horse, albeit painfully. As she falls off the horse, Trent rushes to help her, which she appreciates. She discovers her arm is injured when Trent pulls it to help her up, prompting Leshawna to push him away and help Gwen up instead.

Trent volunteers to go next, thinking things can't get any worse, but misses the horse and painfully lands crotch first on a fence post. Owen jumps, but the horse runs away in terror at his massive weight, causing Owen to chase it, and force himself onto the saddle. Chris gives the Killer Grips a point, despite Owen cheating, angering the Gaffers. All of the castmates jump, except Justin, who cites a modeling contract that prevents him from participating in order to protect his assets. Lindsay and Beth take the challenge together, but before jumping, both exchange promises that if one of them dies, they could have one of the other's items. Despite their theatrics, they land on the horse successfully. With the score tied, Leshawna and Heather are the last one's left, and they both climb up the ladder while insulting each other. At the top, Leshawna pushes Heather off, but Heather pulls Leshawna down with her. Both end up hanging from a weather vane by their pants. Leshawna's pants rip on the weather vane and she falls off, but she still misses the horse, while Heather is left hanging off the plank. Both teams are still tied with three points each.

For the tie-breaker, Chris explains that the castmates will settle it via a showdown using water guns.

In order to help Gwen win, Trent chooses the easy-to-hit Owen as the shooter for his team.

However, Owen drinks all the water out of the squirt guns, forcing Chris to make a new tie-breaker. The final challenge is to have the team of cowboys (the Grips) rope the group of cattle (the Gaffers, wearing cow udder hats), to which Trent embarrasses himself again by trying to compliment Gwen.

While the Grips do well at first, Trent gives up in order to let Gwen and her team win.

The remaining Gaffers find some extra rope lying around and turn the tables on the Grips by capturing them, thus winning the challenge. Duncan ties Harold up, despite being on the same team.

Chris tells the Grips that, since they are the losers, they must brand themselves with a burning letter "L," but Trent asks for anything with a "G."

Chris says that branding is off and, instead, the Killer Grips will be voting someone out. Chris then lets everyone shower in a barrel before the elimination ceremony, where Harold takes a long time, bothering the other contestants, so Duncan shakes him off the barrel.

While everyone is showering, Gwen meets with Trent, expressing guilt over him throwing challenges for her, and also how unsettling his obsession with the number nine is. Gwen ends her relationship with Trent, much to his dismay. Justin, who is nearby, overhears everything and tells his team. Justin and the rest of his team confront Gwen and accuse her of having Trent throw challenges. Though she tries to convince them she didn't, they don't believe her, and Justin accuses her of making attempts to get to the final two. In a desperate attempt to convince them, she urges them to vote off Trent, and Justin ominously insists that Gwen will owe them.

At the elimination ceremony, Chris tosses the Gilded Chris Awards to Lindsay, Beth, Justin, and Owen, with Trent having been voted off. He begs to say goodbye to Gwen before leaving, but an uncaring Chef hurls him into the lame-o-sine. Afterward, Chris and Gwen watch a replay of the night's elimination ceremony from Chris' viewing room. Gwen questions if Chris had her view the ceremony to make her feel bad, which he affirms. Gwen sadly responds that it worked.

Due to the heat, Heather and Leshawna share an umbrella.

Lindsay and Beth hide under the shade on their trailer.

Harold passes out in his trailer.

Owen struggles to fan Justin, due to his own overheating.

Trent is willing to get a cold from her, as long as she is hydrated.

DJ made a kiddy pool for himself to sit in to cool himself down.

Harold bumps his head on the trailer's window after hearing Chris's gunfire.

Heather uses a brush to make Leshawna's hair into an afro.

Leshawna's reaction when Heather laughs at her hair.

Justin poses while water falls on him.

The "steed" the contestants have to mount.

Gwen on the platform.

Trent facepalms himself, because he thought it was stupid of him to tell Gwen to "break a leg" while she was on the platform.

Gwen falls off the platform.

Harold jumping off the platform.

Duncan purposely lands on top of Harold in the horse-mounting challenge.

Owen riding on the horse.

Justin points out that his modeling contract allows him to skip the challenge...

...and explains this to his teammates.

...till Heather pulls her down too...

..and both get caught on a sharp prop...

..which makes her very angry.

The remaining castmates listen as Chris explains their second challenge.

Owen dressed up as a cowboy.

"Would the host care for an udder sandwich?!"
- Duncan

Chef ropes Chris out of anger right before the challenge begins.

...but accidentally ropes herself instead.

Owen is unable to catch Harold.

Lindsay captures a depressed Trent, forgetting that they're on the same team.

Duncan ropes in Harold, even though they're on the same team.

Harold, after Duncan tied him up.

Trent having makeup put on his forehead after facepalming himself.

Everyone waiting to get into the bucket.

Owen promises Heather not to pee in the barrel.

Duncan gets tired of Harold taking a long time, which leads him to push him over.

Justin confronts Gwen about Trent throwing the challenges for her.

Gwen tells to Killer Grips to vote off Trent.

Beth and Lindsay hug after getting the first Gilded Chris awards.

Owen and Trent are in the bottom two.

Justin and Owen hug each other learning that they're safe from elimination.

Trent is carried by Chef to the Lame-o-sine.