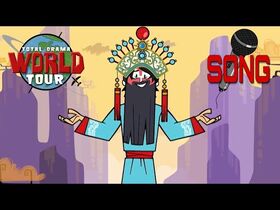 "Chinese Fake-Out"
"A Chinese Lesson" is the twenty-third song featured in Total Drama World Tour. It is sung in "Chinese Fake-Out" by Chris and the remaining contestants (except Courtney) during the Chinese-food-eating challenge. This song is broken up by long patches of dialogue to allow time for the consumption of the disgusting meals and elimination of one contestant who finishes last per round. The gaps in between the stanzas are where the dialogue begins, usually featuring the contestants complaining about the current dish or asking what it is, followed by Chris's explanation.

Chris: A little Chinese lesson, for you. Manman chi means "enjoy your meal."
Everyone (except Courtney and Sierra): Manman chi. It's no raw deal.
Cody: Is it roasted eel?

Chris: Manman chi means "bon appétit."
Alejandro, Blaineley, Duncan and Heather: Manman chi. What do we have to eat?
Heather: It's still moving its feet!

A little Chinese lesson for you, manman chi means enjoy your meal.

Manman chi, it's no raw deal.

"Is it roasted eel?"

Manman chi, what do we have to eat?

"It's still moving its feet!"

Manman chi, its dinner for four.

I think I'm nearly done for.

Manman chi, don't get the squirts.

Alejandro and Blaineley both gag and vomit.

Cody's in first class with me, and my love-me tea!