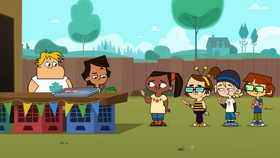 The kids set up their own business in order to learn the value of money. Two of the kids' business are selling like hot cakes but one of them has a problem trying to withhold the secret to their success.

At the start of the episode, Chef walks into the boys’ bathroom only to find Owen, Duncan, and Noah flushing money down the toilet. Chef is very displeased of what they are doing.

The kids are playing Giggle-Doh for Arts and Craft. While Bridgette makes a unicorn, Owen throws a handful of clay, Harold makes a blue fish, Cody smells his clay after molding it, Noah makes stacks several blocks of clay to form a wall which collapses after some of the clay thrown by Owen hits it and Izzy creates a miniature clay version of herself that keeps falling over.

Chef wonders what the kids are doing.

Owen tells Chef that they're flushing money down the toilet.

Chef wants to teach the kids the value of a dollar.

..as he bought 3 magic beans from Duncan.

"All sales are final."
- Duncan

Chef stops Owen from flushing his money down the toilet.

Chef and Cody want to see the booths the kids made.

Gwen tells Cody that she does funerals for little brothers too.

.. which is burping the alphabet for 1 dollar.

Chef buys a chicken from Jude and wonders what the sauce of the chicken is.

Jude tells Chef that the sauce is ghost peppers..

Chef goes to Noah to see what he's doing.

Owen and Noah's business: heating up pants in an oven.

"Owen, did you just lick the sprinkles off of the cookies?"
- Noah

Owen licks the sprinkles off of the last cookie.

Leshawna tells the kids that Noah and Owen are selling cookies.

The kids run to buy cookies from Noah and Owen.

"Look at all this play money! We're play rich!"
- Owen

Leshawna wonders when will Noah and Owen make more cookies.

Noah tells Leshawna that they won't be making any more cookies.

Leshawna tells Noah that the other kids and her were ready to pay real money for the cookies.

Owen says that he always had a dream of..

An empolyee tells Owen that he's just in time to add the secret ingredient to the cookies.

Owen says that his favorite part of the dream is..

.. hanging out with his best buddy.

The kids start buying more cookies from Noah and Owen..

Leshawna asks Noah what did they do with the cookies.

Noah realises that it was Owen's spit that made the cookies delicious.

Noah tells Owen that it was his spit that made the cookies delicious.

Noah wants Owen to lick the sprinkles off of the cookies.

Owen tells Noah that he's unable to keep a secret.

Owen spoils the ending of a movie to a couple.

Owen tells Noah that the kids made a surprise party for him..

.. which makes Chef and the kids annoyed.

Owen thinks that what they're doing is wrong.

Beth gives a phone to Bridgette.

The kids after they ate more of..

Noah with a lot of money in his hands.

Leshawna wonders why the second batch of cookies were awful.

Owen struggles not to tell the truth about their cookies.

Owen tries to tell the truth about their cookies to the kids..

.. but Noah stops him from doing so.

Chef tells Noah and Owen that there's a lineup of grownups around the block that want to buy their cookies.

Noah and Owen notice the lineup of grownups.

Chef introduces a random businessman to Noah and Owen.

Owen almost tells the truth about their cookies to Chef and the random businessman.

"Who hasn't pooped in a sandbox, right?"
- Chef

Noah tells Owen that they're only seconds away from their dream.

The kids and some grownups eat Noah and Owen's cookies.

Owen tells the truth about their cookies to everyone..

.. which grosses everyone out..

Noah wants to say 1 thing in his and Owen's defense.

Retrieved from "https://totaldrama.fandom.com/wiki/A_Licking_Time_Bomb?oldid=1599184"
Community content is available under CC-BY-SA unless otherwise noted.