A Mine Is a Terrible Thing to Waste 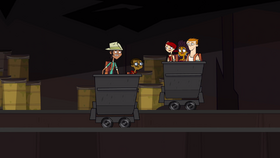 Search for a golden Chris statue in an old abandoned mine

Brick and Anne Maria
The two teams are sent into an abandoned mine, where one contestant takes charge of her team, and someone's disorder gets more out of hand. Someone throws the challenge to save his old team, leading to his elimination. Meanwhile, an old contestant falls in love with a new contestant, and gives her a special reward, which leads to her quitting the competition, and a former intern returns to the quitter's former team to take her place as a contestant.

The camera first pans to Brick and Lightning working out by lifting a log. Lightning shows off his muscles by using only one arm, compared to Brick using two. Jo, in the confessional, says that no matter how hard Chris tries, he can't break her. She points out that, since she is now the only female on the Toxic Rats, she has the girls' side of the cabin to herself, allowing her to work out just like the ancient Olympians did: naked. Her shadow is then seen in the cabin, causing a bird to barf at the sight of her in the nude. At breakfast, Chef is missing and breakfast has not been made. The group goes into the kitchen for food only to find that the cupboards are bare. Chef then pops up outside the kitchen window and says to search in the walk-in freezer, but it turns out to be a refrigerated van which Chef drives to the challenge. He opens a slot to the back to tell the contestants that he's taking them to the challenge, laughs and hits his thumb closing the slot.

At the challenge, Chris sends everyone into a mine to find a Gilded Chris Award of their team's color. However, it's radioactive, and each contestant is given a Geiger detector with a 30-minute timer, and that if they don't get out of the mine in time, bad things will happen. He uses Dakota as an example, who was in there for over 40 minutes and lost all of her hair, but was otherwise unharmed. The scene momentarily switches to an angry Dakota, who exclaimed that Chris is a dead man. Chris also gives them all heavy backpacks they have to wear in the mine until he says to drop them, and not allowed to look inside of them either. Lightning and the Rats make it to the mine shaft elevator first, but Lightning shouts and causes a localized cave-in on his team. The Mutant Maggots pick up the flashlights in the shaft. Sadly, the elevator crashes at the bottom, which forces the Rats to shimmy down the cables. Brick goes first, and Jo throws him the jar of fireflies. Brick catches the jar with both hands, and begins to fall swiftly down the shaft. He is able to slow himself by using his legs, but Jo and Lightning land on him, allowing the fireflies to escape. Jo and Lightning chase after them, leaving Brick alone in the dark.

Meanwhile, the Maggots explore the caves, and Mike picks up a hat from the ground. He puts the hat on and instantly channels Manitoba Smith, his adventurous alter-ego. He quickly searches the areas and finds rodent leavings which he licks to find which path they should take. He leads his team through the mine, eventually coming to a couple of minecarts. Mike and Cameron get in the first one, while Scott, Anne Maria and Zoey ride in the second. Meanwhile Jo and Lightning continue chasing the fireflies, which Jo manages to capture by trapping them in the jar over Lightning's head.

Back at the entrance, Brick hasn't moved far in the dark, but finds a leftover flashlight. When it turns on, he sees a giant mutant gopher that chases him through the mine. Back on the maggots team, the carts split, sending the first one ahead, while the rear cart ends up in a pool. In the pool, a shady figure grabs Anne Maria and takes her farther into the cave. Nearby, Mike is knocked out and Cameron tries to act like Jo to make him regain consciousness, which makes him revert back into himself. Brick is still being pursued by the gopher, until he crashes into a rock. The gopher smells Brick and reacts to his smelly boots, which Brick uses to his advantage. The camera then comes back to Anne Maria, who is surrounded by giant mutant gophers and the shady figure that captured her. He then reveals himself to her as Ezekiel, still in his feral state, and appears to be attracted to her. Brick then catches up to his team, he thinks he is safe as he chased away the gopher, until three other gophers catch all three of the Rats and pull them down into the ground.

Anne Maria is then seen on top of a pile of things Ezekiel brings to her as gifts. The rest of the Maggots find each other and they hear a cheerful scream from her nearby. Then follow the sound into Ezekiel's lair where Ezekiel has captured the Rats and has impressed Anne Maria by giving her a giant "diamond". Jo then releases the fireflies to go into the gophers' faces, which makes the Rats free again. Lightning then goes for their statue, but Ezekiel stops them. Chris then announces its time to drop the backpacks which are revealed to have bombs in them. Mike originally grabs his team's statue, but gives it to Scott to help stop a gopher from attacking Cameron and Zoey. Scott then tries to get rid of it, but it lands in Anne Maria's hair and she is too distracted by the "diamond" to care or notice. Lightning strangles Ezekiel to get his statue again and they all get on mine carts. Mike struggles while trying to free Zoey and Cameron from the gopher, so Brick takes pity on his old team and breaks their statue on the gopher to knock him out. They then all get on the mine carts and ride out before their Geiger detector's timer ends.

Back above ground, the carts are seen crashing out of the exit, and the Maggots Chris statue lands in front of Chris, declaring the Maggots as the winners. Chris then blows up the bombs sealing off the toxic waste coming from it, which also got the federals off their back. After that, Chef then uses a powerful hose to wash off any waste. Later that night, Cameron asks Mike if he has Multiple Personality Disorder. Mike fesses up, but Cameron makes a deal to help him control it if he helps him get rid of Scott, since he doesn't trust him. Mike quickly agrees to his plan.

At the campfire ceremony, Jo and Lightning are the first ones to be safe. The Toxic Marshmallow of Loserdom then goes to Brick, for going against his team and costing the win for them. His old team salutes him before he takes off. However before he is hurled, Anne Maria runs over and hops into the Hurl of Shame and quits, since she received a large "diamond" that will make her rich. Chris then tells her the "diamond" is actually cubic zirconium, which is practically worthless. He then hurls them both, just as Anne Maria tries to change her mind. Since the Maggots lost a player, Chris decides to fire Dakota for being an intern and brings her back into the game, as Anne Maria's replacement.

Jo talks about how she can now work out like the ancient Olympians...

Zoey finds no food in the cupboards.

Chef tells Lightning to search for food in the walk-in freezer.

Lightning has the idea to search in the walk-in freezer thanks to Chef.

Chef traps all the contestants in the walk-in freezer and drives them to the mine.

Cameron asks what the badges are for.

If the badge turns orange, they have 15 minutes left.

If the badge turns red, they have five minutes left.

Dakota has lost her hair from the mine.

Brick catches the jar of fireflies.

Mike finds a hat in the mines.

Scott remarks that he's "always wanted to die underground with a hat-loving loser."

Anne Maria and Zoey are insulted by Manitoba's sexist comment.

Anne Maria is unfazed by only having fifteen minutes to live.

Manitoba Smith licks rodent leavings to find which path they should take...

Scott says to go right because it's "right"...

...which causes Cameron and Zoey to glance at each other.

"That one's a sandwich short of a picnic eh?"

Scott volunteers to keep Anne Maria safe at the back, which she's unhappy about...

...but he pulls her into the cart.

Lightning runs around with a jar of fireflies on his head.

The Mutant Maggots riding on mine carts.

Anne Maria, Zoey, and Scott are afraid of dying.

Lightning is taken aback after Jo says she never kissed a guy before.

Zoey is afraid when something pulls Anne Maria into the lake.

Jo and Lightning make a "guys' pact" to vote Brick off.

Cameron panics when Mike is unconscious and thinks of how to revive him...

...shortly before they are attacked by a mutant gopher.

Brick finds out that the mutated gopher who chased him is scared of his boots' stench...

Anne Maria awakes after being kidnapped.

Anne Maria is surrounded by gophers.

Ezekiel reveals himself to Anne Maria.

He has won Anne Maria over by giving her a giant "diamond."

Cameron is overjoyed when Mike calls him his "buddy."

Brick is reunited with his teammates...

... but they are captured by mutated gophers.

Zoey happily jumps on Mike after reuniting with him.

Their team is back together after being separated.

The Mutant Maggots are angry at Chris.

The Toxic Rats trapped by the mutated gophers.

Cameron tells Scott to "keep it down", as to not let the gophers hear them.

The gophers are scared away by Brick's boot stench.

The gophers are scared away by the fireflies.

Lightning gets the gilded Chris.

Mike gets the other statue.

When Mike goes to rescue Zoey and Cameron, Scott throws the statue away...

Brick informs Lightning that he has the gilded Chris...

...and he kicks Ezekiel away.

...and rescues them, breaking the gilded Chris in the process.

Brick throws Zoey and Cameron into the mine carts.

The carts go down the mine...

Before announcing the maggots win, Chris blows up the mine.

Mike hugs Cameron when he offers to help him with his multiple personalities.

The Toxic Rats at their sixth elimination ceremony.

...and his old team salutes him before he takes off.

Chris tells Anne Maria that the diamond is fake.

Retrieved from "https://totaldrama.fandom.com/wiki/A_Mine_Is_a_Terrible_Thing_to_Waste?oldid=1602239"
Community content is available under CC-BY-SA unless otherwise noted.