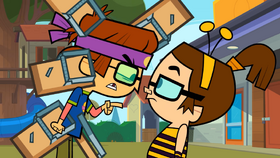 The class geek discovers a rival in their class whom the other kids prefer as the class ninja. Wanting to be the only one to hold the title, the two kids battle over who gets to be crowned class ninja.

The episode begins with Harold's ninja master (an action figure) ordering Harold to recite the three ninja rules; a ninja must always protect others from danger, serve his fellow men, and accept any dangerous missions. After reciting each rule, Harold performs mediocre tasks befitting said rule; 'protecting' Chef from a possible prank call which ends up knocking Chef out after Harold kicks the phone and hitting Chef in the head, cutting Bridgette's sandwich in half although it ends up splattering her with mustard. After the third rule, Chef announces it is snack time and asks the kids who wants to deliver a tray of chocolate pudding cups to the others. As no one else is around to do it, Chef reluctantly allows Harold to do the tasks provided that he do it like a normal kid and not like a ninja. Sure enough, Harold grabs his friends attention by sounding a gong at the top of the treehouse, much to the annoyance of his classmates, who are tired of his class ninja antics.

When Harold knocks on the gong for a third time, he accidentally knocks the tray of pudding off the treehouse and bounces off a trampoline. Before they can hit the ground, Beth manages to grab the cups and throw them at her classmates. The other kids all applaud her moves and call her a ninja, earning Beth the nickname "Ninja Beth". This shocks Harold as he was supposed to be the class ninja. Harold desperately tries to prove that he is the real ninja, even pointing out the ribbon he is wearing, though it turns out everyone has one (three in Duncan's case) as it is a free gift from a cereal box. Seeing how his classmates prefer Beth as the class ninja, Harold becomes heartbroken as being a ninja was his life long dream. With no other purpose in life, Harold leaves the daycare and goes on a long journey. After walking for some time (and growing a long beard), Harold reaches a monastery to become a dishwasher. When he tries to ask a monk about the job, he accidentally trips him while he is serving pizza. Harold quickly reacts by throwing plates at each slice before they hit the ground and all of them land on the table. He praises Harold for his skills and calls him a ninja. Upon hearing this, Harold regains his resolve and returns to the daycare.

While Beth showing off her ninja skills, Harold returns and challenges her for the title of class ninja while removing his (fake) beard. According to Owen, Harold's entire 'journey' only took place in his imagination and he was in fact in the bathroom the entire time. Beth has no qualms over letting Harold be the class ninja and Bridgette even asks why there couldn't be two people holding said title. However due to his pride, Harold claims that the ninja rules state only one person is allowed to hold the title, though he pushes it too far when he mocks Beth's bee costume. Infuriated by Harold's comment, Beth accepts his challenge.

For the first (and probably last) Class Ninja Battle Challenge Royale, Bridgette and Noah are the commentators and introduce the competitors. For the first challenge, competitors are required to break ice-pop sticks with a single karate chop. While Beth successfully breaks three sticks, Harold attempts to break four but fail. The next challenge requires both competitors to walk through the Mousetrap Minefield. Harold believes the challenge will be easy but midway, Noah reveals a twist in the challenge, they also have to dodge dodgeballs launched by Izzy with her bazooka. After being hit, Harold landed on all the mousetraps, allowing Beth to reach the other side easily, earning her another win. Beth feels a little bad for what Harold is going through but after Harold's refusal to give up and insults, Beth retracts her comment.

The final event involves multiple obstacles; first competitors have to slide down the treehouse slide containing fire breathing fire ants, cross the monkey bars guarded by actual monkeys, the Snapping Crabs Sandbox, the tofu greased teeter totter, swim through a kiddie pool filled with piranhas, jump over the Pit of Sharp Objects and break through the Winner's Ribbon. Harold is up first and to prepare himself, the recites the ninja's mantra. However, he is too scared to compete the challenge and forfeits the challenge. Harold finally conceits defeat and surrenders his ribbon to Beth. However, Beth admits to him that she never really wants to be a ninja and only accepts his challenge because he insulted her bee costume. Harold apologizes to her and the two share information about bees.

Seeing how much it means to him, Beth returns Harold his ribbon as well as the title. However, when she gives him a high five, Harold trips and slides down the slide and crosses all the obstacles. As his friends congratulates him, Izzy filed her bazooka with piranhas from the pool and fire at her classmates. The kids runs away in terror until Bridgette manages to grab two of the piranhas and throw them back at Izzy, knocking the bazooka out of her hands in the process. Noah compliments Bridgette for her quick reflex and compares her to a ninja. Once again, Harold is shocked that someone else is also a ninja and screams in agony just as the episode ends.

Harold talks about the rules of the ninja.

Harold kicks Chef's phone out of his hands.

Bridgette notices that her mom forgot to cut her sandwich in half.

Harold cuts Bridgette's sandwich in half.

Owen likes the taste of mustard with watermelon.

Chef made pudding for the kids.

Harold wants to deliver the pudding cups to the kids outside.

Chef wants Harold to carry the pudding cups like a normal kid would.

The kids play tag outside..

..until they hear the sound of a gong.

"Great! He has the gong again!"
- Duncan

Harold tells the kids that he brought them snack.

Owen wants to know what the snack is.

Harold tells the kids that he brought them pudding.

.. which scares the kids, especially Owen.

Beth plays with her dolls.

Beth saves the pudding cups and gives them back to the kids.

Harold tells the kids he's the class ninja, not Beth.

Beth tells Harold that everyone..

.. has a master ninja ribbon..

The kids take Beth to the daycare.

Harold questions who is he.

Harold walks in a forest.

Harold wants to be a dishwasher.

Harold gives out dishes to the monks.

.. and saves their pizza.

One of the monks thinks Harold is like a ninja.

Harold agrees with what the monk said about him.

Beth cuts some fruits in half.

Owen is amazed by Beth.

Izzy wants Beth to cut a watermelon in half..

.. but Harold comes in and cuts the watermelon in half himself.

The kids are surprised by Harold.

Beth is angry at Harold.

Beth says that if Harold didn't insult her she would've let him be the class ninja.

Noah and Bridgette host the challenge between Harold and Beth.

Bridgette and Noah talk about Beth.

.. but fails and loses the first round of the challenge.

For the next round Beth and Harold must cross the minefield of traps..

Beth says that she feels bad for Harold.

Harold and Beth must race across the monkey bars.

Beth and Harold while they listen to all the obstacles they have to race through.

Harold is the first one that has to do the challenge.

Harold about to do the challenge.

"A real ninja can do anything he puts his mind to."
- Harold

Harold is too scared to do the challenge..

Beth tells Harold that the only reason she took the challenge was because he called her bee outfit silly.

Beth gives the master ninja ribbon back to Harold..

.. and accidentally pushes him into the slide.

Izzy made a piranha launcher.

Izzy shoots piranhas at the kids.

Bridgette gives the piranhas back to Izzy.

Izzy is annoyed by Bridgette.

Retrieved from "https://totaldrama.fandom.com/wiki/A_Ninjustice_to_Harold?oldid=1603889"
Community content is available under CC-BY-SA unless otherwise noted.