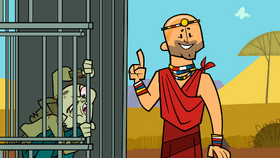 First Class to next destination along with someone else; Tray of candy

The final five arrive in Tanzania for their next challenge; hunting down a former contestant who has now gone feral after hiding in the cargo hold. Someone's obsession with another peaks, and two others continue to deny their attraction towards each other. In the end, one person wins the challenge and another is sent home for the second time after a close vote.

The episode begins by showing Alejandro, Heather, and Duncan sitting in economy class after losing the challenge in China. Duncan is shown to be unusually happily carving a skull into the wooden seats with his knife whilst whistling. Alejandro comments that he has never seen Duncan so happy before. Duncan says that he is elated with Courtney's recent departure, then comments on Alejandro and Heather's mutual crush, revealed by Blaineley after her elimination last episode. Both try to deny it, but end up speaking in unison, making them seem even more like a couple. Meanwhile, in the first class compartment of the Jumbo Jet, Sierra has started feeding Cody her Love-Me Tea. However, the tea causes him to go into a comatose state and gives him hallucinations, including one in which Sierra turns into a polar bear.

Once the plane lands, Chris welcomes them to Tanzania, home to the Serengeti Plains. Sierra arrives late, carrying Cody in her backpack. She declares that she will be playing for herself and her "husband." Chris introduces the first challenge, which he named "Sock-et To Me." He also points out the punishment he gave Chef for making an illegal alliance with Blaineley; wearing a parka and pants in the searing African heat, which he dubbed as the "Penalty Parka." Their challenge is to run to a pile of plums and return with as many as they can carry, while avoiding the soccer balls kicked by the contestants. Only Alejandro makes it through unharmed. The plums are then used to smash gourds, a competition that Heather wins. As a reward, she gets six tranquilizer balls for the hunt. Alejandro, smashing his gourd after Heather, gets three balls. Duncan only gets two balls, since he flung his cricket bat at the gourds to smash them instead of using the plums. Sierra and Cody, failing to smash their gourds, only get one ball each and no slingshot to hurl them with.

Chris then announces that the tranquilizer balls will be used to knock out Ezekiel, who was found in the cargo hold after Blaineley ratted him out. Ezekiel is now in a complete feral state; he is bald with the exceptions of a few long strands of hair, has liver spots at the top of his head, and is missing his toque. His two front teeth are considerably larger, like buck teeth. Both his hoodie jacket and jeans have several large holes in them. He is now also barefoot, like a wild animal, revealing feet that also seem to resemble that of a wild animal, having three talon-like toes instead of regular human feet. He even attacks an intern upon release. The contestant who catches him wins invincibility. Sierra manages to build her own slingshot from a stray stick and Cody's spare underpants. Duncan suggests to Alejandro and Heather they team up to hunt, but Heather decides to go alone. This is a mistake, as Alejandro steals all her ammo. This becomes a problem, as she soon comes across a lion.

Alejandro and Duncan walk into a quicksand bog, slowly sinking into it until Alejandro manages to lure Ezekiel with a stick, into pulling them out to safety. However, they were unable to catch him, because he ran away before either of them could get a clear shot at him with their slingshots. Sierra shoots some rocks to lure Ezekiel out, but she ends up striking a rhino, which angers it, causing her to flee in terror. She trips, launching Cody into the air and into a tree. Heather bumps into Sierra, offering to team up with her and help Cody down. However, a baboon grabs him and runs off with him, which greatly angers Sierra.

The girls and boys run into each other, and thinking the other team is their target, attack each other, and accidentally knock each other out with tranquilizing balls. Chris chooses this time to make the contestants sing, despite being still stunned. This doesn't stop them from singing Wake Up. At the end, Chris warns that they have just one hour to catch Ezekiel, or the plane is leaving without them.

Duncan tries to make an alliance with Sierra, but she only wants to ally with Cody. Meanwhile, Heather and Alejandro plan on how to get rid of Duncan and win the competition at the same time. Sierra runs off on her own, finding Cody held by a baboon. Cody has recovered from the drugging, warning Sierra that the primate really likes him. This angers Sierra, who gets jealous and tries to save Cody, causing the baboon to call for more baboons to stop her. Even though she is outnumbered, Sierra easily beats up the baboons and rescues Cody.

Heather and Alejandro put their plan into action. Heather asks Duncan about Gwen, which distracts him long enough for Alejandro to trip him. Duncan smashes into Serengeti Blood Berries, and goes to a watering hole to wash up. Ezekiel leaps out of the water and beats on Duncan. Alejandro, being the only one left with ammo, easily knocks out both Ezekiel and Duncan, winning the challenge, the invincibility, and the reward. Trying to leave Ezekiel behind, Chris rushes the contestants inside the Jumbo Jet, but Ezekiel manages to break his way back into the plane by pulling away a sheet of metal from the top before it leaves.

At the Barf Bag Ceremony, Duncan gets voted off with two votes, which he expected. He gets tossed out of the plane by Chris while trying to explain that he does not care. Alejandro, considering who to bring up to first class with him, chooses Cody, surprising everyone. This angers Heather, who begins ranting about Alejandro in the confessional, saying that she made a fake alliance with him, and that's how he repaid her – by taking Cody instead of her. Chris then barges in on Heather's confession, freaking her out, and signs off the episode.

Duncan is seen taking the Drop of Shame again, saying while it's a pity he lost a chance to win the money, he is happy to be out of the game, and goes on about things he disliked about being on the plane (the need to sing a song, the confession, Alejandro, and Sierra). Duncan then smiles to the camera and tells Gwen that he'll see her soon. Suddenly, he falls and lands in quicksand right next to a lion. Duncan quickly corrects his earlier statement to Gwen and says "Later than soon" and screams in terror as his parachute flops over him.

Duncan carves a skull into a bench.

Sierra talks about the Love-Me tea that she got back in China.

The landscape of Tanzania.

Heather, Duncan and Alejandro laugh at Chris' costume for the challenge.

Chris explains the background behind his costume.

Sierra carries Cody in her backpack for most of the episode, playing them both.

After being mocked, Chris explains the challenge, "Sock-et To Me".

Chef wearing the penalty parka for helping a former contestant cheat in the last challenge.

Duncan is hit by a soccer ball, courtesy of Chris.

Duncan and Heather line up for the challenge.

Sierra drops the plums on the way back.

Duncan's face is squished in between two soccer balls, courtesy of Alejandro and Heather.

Alejandro's soccer ball takes a curve and goes back...

Heather completes the first part of the challenge.

The same occurs to Heather...

...and Cody, after Sierra turns her back.

The second part of the challenge commences.

Heather wins the second part of the challenge.

...and smashes open the gourd.

Alejandro smiles, as he completes the gourd-smashing challenge.

Duncan throws his bat at the gourd...

...and his bat ends up smashing it as well.

An intern is scared to open the giant box.

Chris demonstrates the third part of the challenge.

Chris demonstrates a tranquilizer ball on an intern...

...while Ezekiel reaches for his sandwich.

Chef unlocks the cage that Ezekiel was in...

While Sierra remarks that Zeke doesnt look like himself, Heather says he still smells the same.

Sierra has a idea to improvise to make an improvised slingshot.

Rather than Ezekiel, Heather encounters a lion.

The lion growls at Heather, scaring her and making her run away.

As Chris signs off for a commercial break, the lion roars, scaring him enough to make him run off too.

Duncan and Alejandro search for Ezekiel.

Rhino is angry after rocks striking in his rump.

...and Sierra is seen quickly fleeing from rhino.

Cody gets stuck in a tree.

Alejandro uses a stick to lure Zeke to them, getting them completely out.

...but accidentally shoots a camerman instead.

Heather "helps" Sierra get Cody down and tries to ally with her.

After pointing Heather in the direction of Ezekiel's footprints, Cody gets stolen by a baboon.

While walking, Alejandro hears a sound from the bushes.

The boys unknowingly charge at who they think is Zeke...

...and the girls unknowingly charge at what they think is a monkey.

...and Sierra all get hit by tranquilizer balls.

Everyone wakes up groggily, being forced to sing.

Duncan tells Sierra that he will help her find Cody if they make an alliance...

...but she quickly shuts him down, telling him she is only in an alliance with her "husband".

Alejandro explains his secret plan to Heather about winning the challenge.

Even Heather is astonished by Alejandro's ruthlessness.

Sierra sniffs Cody's shoe, discovering that he is close.

Cody is spotted next to a baboon, finally out of his comatose state.

When Sierra comes down to greet him, a baboon growls at her...

"Take your stinking hands off him, ya darn, dirty ape!"

Sierra grabs Cody and excitedly tells him that they're gonna find Ezekiel.

After being distracted by Heather, Duncan is tripped and falls into a bush.

Duncan goes to a watering hole in order to wash off.

Ezekiel emerges out of the water...

...until both of them are tranquilized by Alejandro.

...and they stop hugging.

Chris declares Alejandro as the winner of the challenge.

Ezekiel sneaks back into the plane once more.

Alejandro moves on to his new plan; to break up Sierra and Cody.

Chris barges into the confessional, while Heather is using it, to sign off the episode. 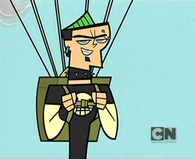 Duncan at his Drop of Shame.

Retrieved from "https://totaldrama.fandom.com/wiki/African_Lying_Safari?oldid=1591381"
Community content is available under CC-BY-SA unless otherwise noted.