Aftermath: Revenge of the Telethon

Aftermath: Revenge of the Telethon 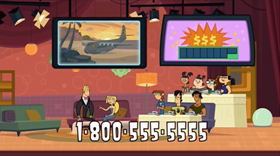 "Save This Show"
"Sisters"
The second installment of season three's Aftermath includes a fundraiser in order to resolve for the plane's fuel shortage. The four eliminated contestants are interviewed, while trying to convince the viewers to donate five hundred thousand dollars. After the studio experiences some severe destruction, thanks to one inconsiderate person, the goal is increased to one million dollars. Will they reach the enormous goal in a mere thirty minutes or will the show be gone for good? The fate lies in the hands of a tough, former competitor and a formerly crazy competitor recently turned genius.

With the Total Drama Jumbo Jet still out of fuel as of the last episode, the Total Drama World Tour Aftermath show is turned into a telethon to raise money so that the plane can be refueled and the cast can make it to their next destination. Bridgette reprises her role as co-host, along with Geoff, while Blaineley has been demoted to a roving reporter and covers the donation tally. $500,000 are needed to refuel the plane, as explained in Bridgette and Geoff's duet, "Save This Show." Despite their moving duet, no money is raised at first. A few incentives are then offered, including a box of Chef Hatchet's Total Drama Yum Yum Happy Go Time Candy Fish Tails for donating $25, a T-shirt with Chris' face on it that shrinks and bleeds if wet for donating $50 and one of Lindsay's unused lip gloss tubes for donating $100. Despite this, only $203 is raised, $200 of which was from Harold's mother if Harold promised to clean out their garage.

This inspires the hosts to start offering rewards if certain monetary goals are reached. Their first attempt is showing another "Total Drama Fugitives" segment when they reach $10,000. As shown in the segment's footage, Ezekiel is once again spotted in the cargo hold of the jet, while there are two possible sightings of Duncan. Only an extra $100 is raised during this segment, so they then bring out DJ and show various clips of him accidentally hurting almost all of the animals he met in the episodes of Total Drama World Tour, in the style of "That's Gonna Leave a Mark!" Afterwards, all the various animals DJ had hurt are brought out on stage in cages, and Geoff announces that DJ will pet an animal if a certain goal is reached. Blaineley, in an effort to raise even more money, releases all the animals from their cages. DJ safely gets away, but the animals go on a vicious rampage and attack the entire studio and everyone in it.

After the commercial break, the studio is in ruins because of the animal attack and Bridgette is bandaging an injured Geoff. Over $300,000 is raised from the chaos, but unfortunately, due to the studio being wrecked because of Blaineley's stunt, the goal becomes $1,000,000 to cover damage expenses as well as the fuel money. Leshawna is brought out to inspire more donations and she is asked to sing about her cruel betrayal by Alejandro. She tells Bridgette, Geoff and Blaineley that she is sick of singing due to her time on the show, and asks to dance, but Bridgette, Geoff, and Blaineley all insist that she should stick to just singing (due to Leshawna being a terrible dancer). Leshawna then sings "Sisters" and does dance a little, with Harold and Bridgette as back-up dancers. A phone call offers money if Leshawna stops dancing, but Bridgette insists that Leshawna will keep dancing until another $100,000 is raised, in which this goal is reached quite quickly. While on the topic of Alejandro, Blaineley shows various clips of him on a beach without a shirt and his hair in a ponytail as an attempt to amp up the drama between Bridgette and Geoff. Despite Bridgette putting a bag over her head, she still yearns to look, which inspires many calls. All of this is "ruined," according to Blaineley; however, when Bridgette thanks Geoff for being so understanding and they kiss through the bag. However, this still raises a lot of money, bringing them to a total of $721,000.

In a final attempt to receive donations, Izzy is brought out, although she will only respond to the name "Brainzilla" due to her newly-awakened intelligence. Izzy refers to herself in the third person and speaks in a sophisticated fashion, referring to Geoff and Bridgette as "carbon-based life forms, commonly referred to as Geoffrey" or "carbon-based life forms, commonly referred to as Bridgette." She also states that Geoff's grammar is appalling. The peanut gallery mysteriously disappears after her entrance, though Geoff says that he has it all under control. Izzy is strapped to a large trivia wheel and will be asked questions based on the amount of money donated; the more money donated, the harder the questions. If Izzy gets a question wrong, she will fall into a pool of sharks. Despite the questions becoming increasingly difficult, Izzy answers them all easily. After the third spin, though, the wheel breaks off and spins offstage, where Izzy suffers another blow to the head.

Back to her old wild and crazy self, she has to defuse a bomb blindfolded to save the peanut gallery, who are slowly being lowered into a large tank filled with starving sharks. Izzy feels the bomb in an attempt to defuse it, but is only able to deduce that it is "boxy." She then hits the bomb with a hammer, causing it to explode, resulting in the crew and sharks being scattered all over the studio, with Izzy completely blown through the television. By the end of the night, the grand total raised was $1,000,000.01. The show is saved, and Total Drama will be back for another episode.

Blaineley is seen talking to her agent about her contract, demanding that she doesn't want to be part of the show, while an intern wheels Justin out of the studio. After she hangs up, she uses a cloth to clean herself with, but it rubs off her make-up. She finds out the show is still on the air, causing her to scream in horror, since she is on screen with no make-up.

Bridgette and Geoff singing "Save This Show".

Blaineley returns to the Aftermath as a co-host.

Currently, the show has no money.

Total Drama Happy Go Time Fishtails (Strictly decorative, do not eat, may not be legal in all provinces, keep out of reach of children).

Lindsay is the first guest of the Aftermath.

Duncan and Ezekiel are still missing.

Ezekiel prepares to pounce on a rat in the Plane's cargo hold.

Another Duncan sighting, this time in Italy, where he pulls a prank on an Italian monk.

The animals want revenge on DJ for hurting them.

A snake coils around Blaineley's neck.

Blaineley, Bridgette and Geoff refuse to let Leshawna dance, but they allow her to sing.

Bridgette and Geoff reveal the next segment of the episode.

Bridgette covers herself with a bag over her face, to avoid staring at "Fabulandro."

"Brainzilla" is the last guest of the Aftermath.

Izzy returns to her usual crazy self.

The Peanut Gallery dangling above a pool full of sharks.

"It's boxy. Better hit it with a hammer just to be sure."

An intern wheels Justin out of the studio in an exclusive clip.