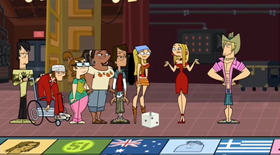 Blaineley
After one co-host forces another into doing a world tour of Total Drama fan countries, the third host becomes fed up with her abusive behavior. Three new guests join the peanut gallery, where five of them get the opportunity to re-join the competition. However, one unlucky co-host ends up unintentionally winning instead.

The episode opens with Geoff happily announcing that this is more than the Aftermath show: "Total Drama Aftermayhem." He then happily announces that Blaineley is finally gone, doing her job and traveling around the world in search of her number one fan, which Geoff does not believe exists. He then tells Bridgette to take it away, and when she doesn't, he wonders where she is. Suddenly, Blaineley appears out of nowhere, revealing that she sent Bridgette instead of herself, taking a seat. Geoff says he thought Blaineley had quit, but Blaineley explains that she won't be paid if the long show lasts too long, and she'll be sued if she wants to quit for some reason other than getting shot or being killed on set by a falling light, leaving Geoff to hope for a tilting light to fall on her.

After Blaineley lies about how the producers were the ones who sent Bridgette off, Bridgette is shown to be in the frigid mountains of Siberia, where she and some interns are caught in a blizzard, which Geoff thought was static on the television. When Geoff asks how Blaineley did this and as Blaineley lies again, a montage shows what actually happened: Blaineley says she took Bridgette to the airport to shoot a special report (put her into a sack), slipped her passport (threw her into a truck, dropping her) and ticket into her purse and helped her on the plane before take off (put her in an airplane, dropping her again and shutting the door). Geoff attempts to communicate with Bridgette via the screen, calling her "Bridgey bear," which confuses her because she assumes he's warning her about a bear. She's concerned because they've already lost an intern and are now being buried by an avalanche. Geoff promises to get Bridgette back and swears vengeance before exiting the stage.

Afterwards, Blaineley introduces the guests. First, Noah, whom she calls brilliant and witty, is received with applause. Then, she introduces "the guy who flirted with danger even though he had a memory-challenged girlfriend back home," Tyler, who swings from a vine and falls to the ground. Lindsay expresses concern for him, addressing him by his first name, prompting Leshawna to win a bet she had with Trent, as she knew Lindsay would remember Tyler's name, asking him to pay her five bucks. Finally, "the boyfriend kisser and the new Heather," that is, Gwen appears, accompanied by a bear who attempts to follow her to the stage but is pushed back by a hook stick. Blaineley then shows the "That's Gonna Leave a Mark" segment. Bridgette is shown again, prompting Geoff to rush back on stage. Blaineley was expected to meet one of her biggest fans, but she sent Bridgette instead, causing the fan to become enraged and demanding that they sing a song about Blaineley. Geoff then performs "Her Real Name Isn't Blaineley," a song that insults Blaineley in various ways while also revealing her real name, Mildred.

Blaineley announces that one of the peanut gallery members will get another chance at the million dollars in the Total Drama Second-Chance Challenge, where five will be selected to compete. Each of the former contestants is given a can of peanuts, five of which contain golden Chris heads. The contestants rush over to Blaineley in order to grab a can of peanuts, but most of them do not have a Golden Chris in them. Leshawna, Lindsay, Beth, Noah, and Tyler get to move on to the next round, which is a giant board game. Contestants must roll a giant dice and complete mini-challenges to move on. Just before they start, Geoff shows some embarrassing clips of Blaineley in the green room in order to exact revenge over what she did to Bridgette, revealing that she is very gross. Blaineley tries to cover it up, saying that the clip wasn't real, but no one buys it.

Blaineley tries to hurry the game along, and Geoff realizes that if they don't finish the show on time, Blaineley — and himself — will not be paid. He then attempts to slow the game down by asking the contestants to take their time while Blaineley rushes them through it. Lindsay starts the competition by rolling the dice and landing on the Owen square. Her challenge is to eat two Jamaican hot peppers and drink milk while watching funny clips of the show without squirting milk out of her nose. The clips are all of Tyler injuring himself, but Lindsay does not laugh because she states that she "never laughs at boyfriends." She then breathes fire from the heat, and Blaineley quickly moves on to the next contestant. It is then Tyler's turn, but due to his injuries, Trent has to push him around in a wheelchair. When Trent wheels him onto the Greece square, it is revealed to be a booby trap and he falls through the floor. Trent is relinquished from his nurse duty and is told by Blaineley to sit by Gwen, where they calmly chat between each other.

Noah takes his turn and his challenge is to dodge lasers while standing on the Area 51 square. If he breaks contact from the square, the face-hugging aliens from Area 51 will brutally attack him and will be eliminated. Noah does very well at first, being able to dodge most of the lasers, but is eventually shocked by one of them, which causes the aliens to attack him. It is then Leshawna's turn and after landing on the Australia square, she is forced to have a boxing match with a kangaroo. Despite her confidence and her claim that fighting Heather will be harder than this, she is almost immediately knocked out, only for Harold to try to fight the kangaroo for her. He is then also knocked out by the kangaroo. Beth then rolls and after landing on a Heather square, her challenge is to come up with a haiku about one of Heather's positive attributes. Despite Heather having no positive attributes, Beth succeeds and moves onto the next round with Lindsay.

Lindsay's second challenge, after landing on the Sweden square, is to balance some of Chef's Swedish meatballs on her nose for at least three seconds. However, she manages to do this before Geoff even tells her what the challenge is. Beth then rolls to the last space, the London square and her challenge is to catch an intern dressed up like Jack the Ripper and bring him to one of the British Guards from London. While she is doing this, Bridgette is then shown again, treating the paw of the bear that attacked them earlier. She says she can't leave the bear (whom she christened "Bruno") until he is healed. Geoff is against this, but is unable to stop it, and instead swears revenge on Blaineley, which she ignores.

Beth catches the intern in the sack and is asked the question, "What is the name of Duncan's London based punk band?" Blaineley tries rushing Beth, but Beth cuts her off saying that she's thinking. Frustrated at Beth for taking too long to answer, Blaineley tells and reveals the answer, "Der Schnitzel Kickers! Der Schnitzel Kickers is the answer!" Since Blaineley said the answer out loud, Geoff congratulates Blaineley and tells her that whoever answered the question first correctly wins the Total Drama Second Chance Challenge and that Blaineley is now in the competition. She is against this, but she is captured by three interns. Geoff is thrilled that she is leaving as he was trying to exact revenge on her, then tells the audience that the next aftermath episode will be at the secret finale location. Blaineley tells him that she won't let them take her to that show which she thinks is full of losers. She runs off the stage with interns chasing her after she says this. Geoff then signs off the episode as Blaineley is tied up and dragged off by several interns with various weapons.

After Blaineley is captured by the interns, they put her in a wooden box to be transported, to Niagara Falls. She is seen complaining about that there was no signal on her phone and about traveling in the chest. After this, the camera zooms out to reveal that the large box is being carried by a helicopter. Blaineley continues to complain before the screen fades to black.

Geoff announces that Blaineley is doing a Total Drama Tour in search of her biggest fan.

However, that turns out not to be the case.

Blaineley is with the show and Bridgette is doing a Total Drama Tour in search for her biggest fan.

In a flashback, Bridgette eats a slice of pizza.

Blaineley stuffs Bridgette on the back of a truck.

Bridgette's body falls off the truck, so Blaineley resorts elsewhere.

Blaineley throws Bridgette on an airplane.

This time, Blaineley slams the door and runs away.

Geoff is stunned to see Bridgette in Siberia.

Noah debuts at the Aftermath.

Tyler debuts at the aftermath.

An intern prevents a bear from following Gwen to the studio.

Owen in the "That's Gonna Leave A Mark" segment.

Sierra in the "That's Gonna Leave A Mark" segment.

Gwen and Trent meet up again.

Contestants are thrilled to have a second chance to compete on the show.

Blaineley tells the interns to fire the cans.

Contestants look for an edge to catch the Chris-in-the-box.

Even the three contestants who spent the most time without competing receive cans.

Izzy doesn't get a Chris-in-the-box.

Justin and Trent don't get a Chris-in-the-box.

Eva is furious about not getting a Chris-in-the-box.

Lindsay screams after getting a Chris-in-the-box.

Noah also gets a Chris-in-the-box.

Tyler finds the last one.

Geoff sees a bear behind Bridgette.

Bruno swipes at the camera, cutting Bridgette's feed with the Aftermath.

A stage light falls on Blaineley.

The Total Drama Second Chance Challenge board where the contestants will walk across is seen.

There are spaces for various locations visited by the cast…

…and even the final seven contestants.

The guard holds the last question.

Geoff takes another opportunity to attack and scrutinize his co-host for the episode.

…eating pizza that fell on the floor…

…working on her pedicure…

…also farting and burping at the same time.

Milk is poured down Lindsay.

"Let the comedy sink in."

Gwen smiles at Trent and then amuses him with a joke.

The kangaroo knocks out Leshawna.

Harold prepares to fight a kangaroo in Leshawna's place…

…with the same result.

Beth's second challenge, catch the intern who is dressed up like Jack the Ripper.

The guard is unable to find the card to the final question.

The card is located underneath his hat.

Fed up with the pace of the episode, Blaineley accidentally blurts out the answer. 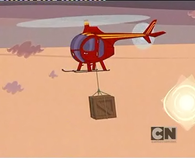 The helicopter carrying Blaineley in a chest.