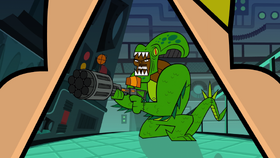 Getting to pick the teams

Geoff and Bridgette
The fourteen cast members must retrieve alien eggs and return them to the trailers without being caught by Mama Alien. During the challenge, a bald contestant loses her wig forever. Ultimately, a couple wins immunity. The elimination ceremony has an unexpected outcome when another couple who had spent the whole challenge making out is eliminated.

The episode begins with the fourteen castmates eating breakfast. Chris comes in and explains the challenge, which is to find alien eggs based on the science fiction film "Alien Chunks," then bring them back to the trailers. He also says that Chef, reluctantly, will be playing the role of Mama Alien, and will be hunting the cast down. Meanwhile, Trent is having trouble with his relationship with Gwen as she and Duncan happily chat about alien movies, of which he knows nothing about. Owen is having some digestive problems after eating the sawdust and foam core prop food from the previous challenge, leading him to choose to eat prunes for breakfast, rather than pancakes, which shocks everyone.

After breakfast, the castmates are sent into a science fiction set and split themselves into groups. Gwen and Trent partner with Duncan and DJ. Bridgette and Geoff try to follow them, but Duncan tells the two of them that they are on their own due to their constant kissing. He reasons that in this type of movie, the kissing couple is always the first to be taken out, so being with them would put the team in danger. Justin, Lindsay, Beth, and Leshawna partner up and Heather, Owen, Izzy (E-Scope), and Harold group with each other.

The groups start their search for the eggs. They continue on down the track until they hear a strange, sucking noise that causes them to stop, afraid that it is the sound of Mama Alien. Beth bravely marches towards the sound, only to discover the source is Bridgette and Geoff making out. Meanwhile, Chef Hatchet, as Mama Alien, is hunting them with a paintball gun filled with green paint, to represent alien slime. Chef finds Heather's group first and begins his attack, with Harold being shot and eliminated first. Owen, feeling a major amount of gas come up, begs Chef to eliminate him so he can go to the bathroom, which Chef complies with. E-Scope stays behind to hold off Chef while Heather makes a run for it. E-Scope brings out her own paintball gun to challenge Chef, but Chef retaliates by bringing out a gatling-like paintball gun. E-Scope also brings out the same gun, and the two battle. Ultimately, Chef defeats E-Scope, though E-Scope doesn't mind the loss since the battle was so much fun.

Afterward, Heather is looking around when Chef ambushes and chases her, claiming that he is getting revenge on her for putting laxatives in his food last season. Heather is shot and her wig falls off and falls through the grates in the floor, which causes her great distress. Meanwhile, Geoff and Bridgette are so busy making out that they don't notice Chef sneaking up on them, and are easily eliminated. In another part of the set, Justin, Beth, Lindsay, and Leshawna wander into a room, where Chef traps and dumps a large load of slime on them through the pipes in the ceiling , eliminating all four of them at once.

Duncan, Gwen, Trent and DJ find the eggs and prepare to make a run for it, but Chef attacks them and DJ is shot. Duncan, Gwen, and Trent make it out of the room and outside with the eggs, but Chris (playing the role of the military) drops several slime bombs on them from a helicopter. Trent and Gwen take cover, but Duncan is hit and eliminated. Trent runs for the last surviving egg, balanced precariously on a plank of wood, but Gwen draws attention to her lucky necklace that is about to fall in the sewer. After some thought, he saves the necklace right before it is about to fall through, which makes Gwen happy. She decides to give the necklace to Trent because she thinks it will give him luck, which Duncan calls girly. Trent spots two alien eggs undamaged from the conflict, and he and Gwen grab the eggs and get to the trailers. Both are happy about their win until Chris explains that since they are the only two winners, they are therefore the team captains, forcing them to play against each other.

Chris says there will be an elimination ceremony and two people will be kicked off, instead of one, because it's Tuesday, a joke which none of the castmates find funny. At the elimination ceremony, the castmates cast their votes with voting devices. The first Gilded Chris Award of the season goes to both Gwen and Trent, while the final one goes to Leshawna, leaving Bridgette and Geoff voted off in a double elimination. The couple questions why they were eliminated, and it cuts to several different castmates in the confessional, talking about their constant making out, and due to it, their general uselessness to any team, being the reason they were voted off. Seemingly unbothered, they continue to make out with one another as they walk to the Lame-o-sine, much to everyone's (except Beth and Lindsay's) disgust.

In the Lame-o-sine, Bridgette complains about getting kicked out of the competition for making out. They get into an argument about the million dollars, with Geoff mentioning that his mother's macaroni and cheese brings happiness. Despite claiming that they are through with each other, the couple start making out a few seconds later.

Chef drops Gwen's serving on the ground after she calls his food disgusting.

Izzy pours ketchup on her pancakes...

...which Lindsay and Beth are disturbed by.

To everyone's shock, Owen turns down eggs and bacon in favor for some prunes.

Owen explains his "plumbing" has been clogged from eating the fake props.

Chris dressed as a director welcomes everyone to Day 2 of Total Drama Action.

Chef gets angry at Chris for not giving him his paycheck.

A fearful Harold jumps into Leshawna's arms on a whim, much to her dismay.

Lindsay and Beth talk about Heather in the confessional.

The contestants hear a mysterious noise.

Beth decides to find out who's making mysterious sucking sounds...

...and discovers Bridgette and Geoff.

Duncan rejects Geoff and Bridgette's offer to join them.

Bridgette and Geoff keep on kissing.

Harold talks about his special senses.

Izzy with her improved paintball gun.

Izzy fires a paintball at Chef...

Beth and Leshawna flirt with Justin.

Beth, Leshawna, Lindsay, and Justin all get slimed at once.

Chef about to shoot DJ.

DJ gets shot by Chef.

Gwen and Duncan share another friendly moment, much to Trent's jealousy.

Trent sees an opportunity to save Gwen's necklace.

After they won, Gwen gives Trent the necklace.

Chef demands his paycheck from Chris.

Trent and Gwen win the challenge.

Every player that didn't win the challenge, minus Duncan.

Besides winning immunity, Chris announces that Gwen and Trent will be captains and choose their teams in the next episode.

The other contestants gasp at the revelation that they will have their first double elimination.

The contestants at the first Awards Ceremony of the season.

Chris sings Kiss Him Goodbye while saying no one is allowed to peek at the others' votes.

Chef walks onto the awards ceremony stage, wearing a dress and carrying the Gilded Chris Awards.

Everyone laughs at Chef wearing a dress.

Chef glares at the contestants laughing at him.

Chris and Chef presenting at the elimination ceremony.

Lindsay gets knocked out by the Gilded Chris Award.

Bridgette, Geoff, and Leshawna are the only three contestants that have not received a Gilded Chris Award.

Leshawna hugs Geoff and Bridgette upon being safe over them.

Bridgette is upset and shocked about her and Geoff's elimination.

Duncan gives his reason for why everyone voted for Bridgette and Geoff.

Bridgette and Geoff resume making out.

The contestants are mostly sickened by this, except for Beth and Lindsay.

Bridgette and Geoff are the first contestants to walk the Walk of Shame.

Bridgette and Geoff enter the Lame-o-sine.

Retrieved from "https://totaldrama.fandom.com/wiki/Alien_Resurr-eggtion?oldid=1648267"
Community content is available under CC-BY-SA unless otherwise noted.