Rodney (one-sided attraction on his side)

Jasmine, Rodney (one-sided, on her side), Samey

Bryn McAuley
Amy was a contestant on Total Drama: Pahkitew Island as a member of the Pimâpotew Kinosewak.

Amy is aggressive, snarky, rude, impatient and will take advantage of anyone if she finds the opportunity. She believes that she is both the "beauty and the brains" between her and her twin and views Samey as a "spare Amy", "lesser Amy" or even a "second Amy," and thus the inferior sibling. She also remarks that she will change Samey's name to "Spare-Amy" when she gets home. Despite her claims of being intellectually superior over her sister, Amy frequently takes credit for her sister's strategies and other accomplishments and is very immature and bratty. She also refuses to take responsibility over her own failures, placing the blame on Samey whenever something goes amiss. This causes other people to believe Amy is more likable and useful, both on the show and in their home lives. Amy swimming all the way back to Pahkitew Island after her elimination indicates that she is also very determined. She is a member of a cheerleading team with Samey, as evidenced by their uniforms.

Amy debuts in So, Uh This Is My Team?, along with the rest of the new cast. Right off the bat she proves to be rather bossy towards her sister and judgmental of the other contestants. She orders Samey to switch seats with her to distance herself from Beardo, but is then intimidated by Jasmine's towering figure. Amy is lucky enough to get a functional parachute upon the cast's descent from the crashing zeppelin. When Samey grabs onto her leg for safety, Amy cruelly kicks her off, claiming she won't miss her. She also uses Samey to break her fall when she lands. Since Amy received a parachute, she is placed on team Pimâpotew Kinosewak. During the challenge, Amy is assigned to help Samey and Rodney gather wood in a wheelbarrow, where she proceeds to use Samey as a human shield to protect herself from Chef's barrage of tennis balls.

Amy offers Jasmine to help with foraging for food in I Love You, Grease Pig!, but rather than going herself, she pushes Samey out of the treehouse. Amy demands that she get her food and not be as lazy as she was at birth. Amy later takes credit for having gathered the blueberries, pointing out that she sent Samey in the first place. She willingly teams up with her sister for the third leg of the obstacle course. Amy voices that this is for the good of the team, as she would hate for anyone to be paired with "terrible at everything" Samey. Amy orders Samey to bring their pig through the greased filled tube, as she is "the do-er of stuff that stinks." They argue, and the pig pushes both of them through the tube, covering them in grease. Angered Amy once again belittles Samey, and blames her for their misfortune.

Samey has finally had enough of Amy's bullying and stands up to her in Twinning Isn't Everything. Amy, in response, pretends to cry in order to gain the team's sympathy. She later on scolds Samey for her outburst during the challenge. When Rodney attempts to confess his feelings for her, she simply yawns and walks off. The sisters team up to ambush Dave. Amy tries to take credit for the shot that hits him, but Jasmine doesn't buy it, as she can tell the two apart. Jasmine leads them to Shawn's hiding spot so Samey can use her remaining balloon to eliminate him. At the last second, Amy goes to pull the balloon from her grasp. This leads to it popping and covering the three in jelly, thus costing their team the challenge. Amy threatens to inform the team that it was Samey's balloon that made them lose. She is certain to taunt Samey when the deed is done, also taking an apple from her in the process. Unbeknownst to Amy, the apple is a poisonous manchineel fruit Samey found in the previous episode. Her throat swells up and she is unable to defend herself against Samey, who imitates her and excuses Amy's pleading as "Samey" begging for attention. As Samey was voted off by their teammates, Chris places Amy into the Cannon of Shame and sends her away.

After the events of the previous episode, Samey is forced to pretend to be Amy in I Love You, I Love You Knots, as everyone believes it was Samey that was eliminated. Due to this, Amy is continuously mentioned and even pictured on the screen for the Truth or Scare challenge.

Despite her elimination, Amy makes a shocking return in A Blast from the Past. In the beginning of the episode, a seaweed covered creature emerges from the water at night. Throughout the episode, the creature is seen appearing in the background and eventually stows away on Chef's ATV, as he drags a paranoid Shawn back to the challenge. The creature leaps out of the water during the final challenge. After revealing its identity as being Amy, the sisters attack each other both verbally and physically. The Pimâpotew Kinosewak are sent to the elimination ceremony after Sugar takes advantage of the opportunity to win. Amy is insulted that anyone would ever believe that Samey was her. Following Samey's second attempt to evade elimination by imitating Amy, they exchange more insults until Chris yells that they are both eliminated. Amy points out that Samey cheated in protest, but the host ignores both of them, and shoots them away from the island.

Amy states in her audition that she considers her twin sister, Samey's audition tape to be "pathetic" and that she herself would be a better choice than her. She then affirms that she was born first and that Samey has been lesser than her ever since. Finally, she ends by saying she is packed up and ready for a limo to take her to the show. 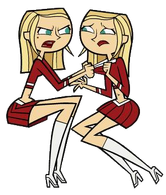 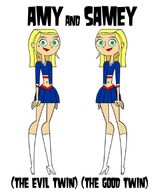 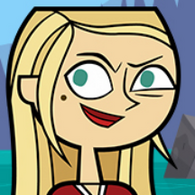 Amy drops a bucket of berries on Samey's head in the theme song...

..and knocks away Rodney's bouquet of flowers.

Amy forces Samey to switch seats with her.

Amy wonders what Jasmine is doing.

Amy talks about how lazy Samey is and complains about how her birth took so long.

Topher compliments Amy on the berries she brought instead of Samey, who actually brought them.

Amy punches Rodney in the stomach to get him to stop talking.

Amy and Samey running with their team's pig.

The grease pig runs over Amy, causing both twins to be dragged down the tube.

Amy snaps at Samey for daring to avoid the blame.

Amy claims that she was the who took Dave out with the balloon instead of her sister, and pushes her over.

Amy fights Samey and Jasmine over their final balloon...

...but it pops all over them, causing them to lose.

Amy begins to feel the side effects of the fruit she took from Samey.

Amy is eliminated in Samey's place.

Amy on the television screen in I Love You, I Love You Knots.

Amy returns to the island covered in vines and seaweed in A Blast from the Past.

Upon returning, she immediately gets in a fight with Samey.

Samey stands up to Amy, and calls her a "bossy blonde cow"...

...and the twins begin to fight.

Amy is fired off the show once again, but this time with her sister.

Amy's cameo in Lies, Cries and One Big Prize.

Retrieved from "https://totaldrama.fandom.com/wiki/Amy?oldid=1692120"
Community content is available under CC-BY-SA unless otherwise noted.