View source
watch 01:26
Who is Anne Maria?
Do you like this video?
Play Sound

A Mine Is a Terrible Thing to Waste

Ezekiel (one-sided attraction on his side)
Vito (broken up)

Dakota, Ezekiel (one-sided, on her side), Jo, Scott, Staci, Zoey

Athena Karkanis
Anne Maria was a camper on Total Drama: Revenge of the Island, as a member of the Mutant Maggots. She also makes a cameo appearance in the finale of the spin-off series.

Anne Maria is a tough, cocky and sassy girl who is all about the looks. She even admits while she wants to win the prize money, she will back out if it involves sacrificing her appearance. She is obsessed with her hairspray and spray tan, keeping the hairspray cans in her pouffe at all times. This accessibility allows her to attack with her hairspray when the matter calls for it. Anne Maria is quite aggressive and will unhesitatingly engage in a fight with anyone who gets on her nerves. Despite this, she is not inherently villainous and does not seek to cause trouble. Her attraction to Vito indicates she looks for similar personality traits in a guy. She is sociable, saying in her biography she would invite everyone to one of her parties. Anne Maria typically isn't her team's most useful asset, although she usually tries and has proven to be otherwise. She is materialistic and has limited mental strength, but she is willing to face a problem head-on so long as she doesn't have to risk ruining her appearance, especially her hair.

Anne Maria is introduced in the premiere of Total Drama: Revenge of the Island, where she is pushed by Dakota due to "hogging" the camera from her. Anne Maria retaliates by pushing her back and spraying Dakota in the face with her spray can. She soon sprays Staci in the face too, annoyed by Staci bragging about her ancestors. Anne Maria is the eleventh contestant to arrive at the forest, and is placed on the Mutant Maggots team. During the challenge, she tries to help with getting the totem pole down, but she repeatedly hits the bottom of the totem pole after jumping on the trampoline, only for Jo to kick the trampoline, causing her to fall. Her team wins the first challenge, as their cabin was the only one who did not get destroyed, though the Maggots showed up last. Throughout the season, she has been shown often spraying her hair with her hairspray, and primping herself instead of putting her full focus on the challenges, which is shown especially in Ice Ice Baby, where she refuses to climb the cliff (since she did her nails recently), and does not want to participate in the second part of the challenge. She is not the most friendly to her teammates, and quickly grows a conflict with Jo, especially when the latter starts to use her looks against her (insulting her looks, and throwing her hairspray to get Anne Maria to do the challenge). Anne Maria ends up attempting to punch Jo, but ends up hitting Brick.

Her infatuation with Mike starts when his alternate personality, Vito, makes his first appearance, and winks at her, making her blush. She thinks Mike is playing an act, and when they are alone, he reveals who he is (thinking Vito is the real him). In the next episode, Vito is in control for a majority of the episode (when his shirt was ripped), which made Anne Maria extremely excited. The two start to flirt, and make out for the majority of the challenge, much to the chagrin of fellow teammate Cameron, who yells at them to stop. When Anne Maria was not all over Vito, she did help out with the challenge, finding the clue what helped them continue the challenge. When they are in the cave, Vito is not getting the key they need to win the challenge, so she kisses him (in front of Zoey) to get him to get the hooks to complete the challenge. After Zoey tells them to stop, Anne Maria smugly replies that he likes classy girls, only to burp. The conflict with Zoey reaches its climax in Backstabbers Ahoy! In the first part of the challenge, Zoey is speaking to Mike about kissing Anne Maria, standing on the cord connected to Jo, and when Anne Maria pushes her off the cord (telling her to get off), Zoey slaps her in retaliation, since she was pushed a bit too roughly. After Zoey makes fun of her tan, Anne Maria is pushed too far, and shoves Zoey to the floor, only to stop from beating her up when Mike's shirt is ripped off, and Vito returns, causing Anne Maria to run to wrap her arms around him. Things are still tense between the two (and Jo) in Runaway Model, as she makes fun of Zoey's looks, and is displeased when her 60's outfit is chosen by the team to use for the maggot to dress in. She argued with Jo about fashion during the challenge, making fun of Jo's sweatpants.

In A Mine Is a Terrible Thing to Waste, she does little to help during the challenge, though her animosity with Zoey has simmered down. When her Geiger detector turns orange, she freaks out, believing she has fifteen seconds to live, only for Cameron to correct and assure her she has fifteen minutes left to live in the cave where she immediately calms down. When Mike puts on a hat and changes personalities, she leaps into his arms thinking it's Vito, finds out it is a new personality called Manitoba who greets her but drops her. When the team rides in two mine carts, she, Zoey, and Scott get separated from the others, and they fall into the lake. However Scott lands on Anne Maria's hair, which she is furious about and tries to attack him, until she is restrained by Zoey. Soon after, Anne Maria is captured and taken to the abode of the feral Ezekiel. It is revealed he has developed a crush on her. He offers the burned remains of last season's prize money and a large diamond, which she immediately loves and accepts. Once everyone finds their idols, Scott tries to sabotage his team by tossing it away, only for it to be stuck in her hair, inadvertently winning them the challenge. Right before Brick is hurled, Anne Maria announces she quits, and jumps on top of him, explaining she is going to cash in the diamond, Chris her her the diamond is fake. As she changes her mind about quitting, she is launched from the island along with Brick.

Anne Maria is seen again in Brain vs. Brawn: The Ultimate Showdown, supporting Cameron as the winner. She is seated next to Mike and Zoey and is angrily glaring at them, clearly jealous that Mike chooses Zoey over her. When the mutants animals attack the arena, she is attacked by a mutant squirrel, who shoots a laser into her hair. She is rescued from the squirrel by Ezekiel but her rescuer attempts to kiss her, terrifying Anne Maria. Fortunately, Cameron knocks Ezekiel out and Anne Maria fixes her hair with her hairspray. After the winner is declare, Anne Maria leaves the island with the other contestants and laughs at Chris as he is arrested by the Royal Canadian Mounted Police.

Anne Maria makes a brief cameo appearance in A Million Ways to Lose a Million Dollars, where she is seen walking in front of the Empire State Building.

In Anne Maria's original design, her skin was much paler than it currently is. Her jeans were a darker shade of blue, and her top was shorter and dark gray. The frills on her current top, which is pink, are also taken from the design of Zoey in Total Drama Reloaded. Her lipstick was originally bright red, but was changed to dark pink. She also lacked the violet eyeliner she wears. Also, the belt on her pants was initially gray, and is changed to pink.

In her audition, Anne Maria states her name, and she'd never watched "Total Drama Rama whatever", until her friends made her sit through "one of those singing episodes", and knew the show needed her. She starts singing, and when she hits a high note, the camera lens cracks, ending the audition.

Anne Maria in her swimsuit.

Anne Maria with a hairbrush.

Anne Maria bragging about something.

Anne Maria with her arms on her waists. 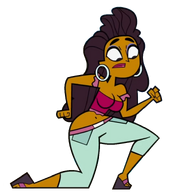 Anne Maria on the ground.

Anne Maria with Mike and Zoey. 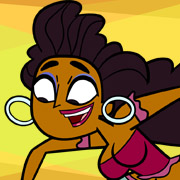 Anne Maria glares at the camera in the opening theme.

Dakota pushes Anne Maria after the camera pans to her.

Anne Maria sprays at Dakota in retaliation for pushing her.

Anne Maria in her first confessional.

Anne Maria asks B what he thinks the next challenge will be.

Anne Maria runs along the obstacle course carrying the maggot.

Anne Maria lunges toward Jo in an attempt to punch her.

Jo throws Anne Maria's hairspray out of the fort.

Anne Maria is reunited with her hairspray.

Anne Maria insists that Mike's regular personality is an act.

"Eesh okay, keep your sweatpants on?!"

Anne Maria warns Cameron to look out for the spider.

Anne Maria gets irritated when Mike wants to save Zoey instead of get the hooks.

Anne Maria gushes over Mike at the elimination ceremony.

Anne Maria clings on to Vito.

Anne Maria reveals that her hairbrush has been stolen.

Anne Maria spraying her hair in the bathroom.

Anne Maria thinks that Vito is back.

Anne Maria panics when she thinks she only has fifteen seconds to live...

...until Cameron tells her that it's actually fifteen minutes.

Scott grabs Anne Maria's arm and pulls her into the cart.

Anne Maria is surrounded by gophers.

...which turns out to have nothing but ashes inside it.

Anne Maria enjoys the "diamond" Ezekiel gave to her.

...only to find out that the "diamond" she has is a fake.