Aquarium for a Dream 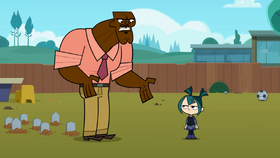 In order to teach the kids responsibility, the teacher tasks the kids in taking care of a goldfish. The kids love their new friend, but their affection for it gets it killed. Not wanting to hurt their feelings, the teacher secretly replaces it with another fish and the kids are none the wiser except for one. This goes on for a while until the creepy girl convinces the teacher to tell the truth.

The episode opens with Chef introducing the kids to the newest member of the class, a goldfish named Richard Swimmins. In order to teach the kids responsibility, Chef tasks them with taking turns to feed Richard, with Izzy being the first to volunteer. After Chef leaves the room, Izzy does not stop pouring fish food into the bowl until the bottle is completely empty. Not realizing she has already fed it too much, Izzy continues with another bottle, until Richard has suffocated to death. Not realizing Richard is dead, Izzy calls Chef for help. Chef immediately takes the fish bowl out of the room and returns with Richard still alive, with only Gwen suspicious of the fish's quick recovery. Chef attempts to tell the kids the proper way to feed Richard, but their innocent looks and puppy dog eyes instead had him telling them not to feed Richard at all.

Some time later, Richard's bowl becomes dirty and Harold volunteers to clean it. Harold does so by putting soap into the bowl and scrubbing it, with Richard still in it. While Chef is busy removing gum from a book, he notices bubbles coming out from the classroom and suspects the worst. Just as he feared, Richard is dead again and the kids are still oblivious to what happened. Chef again tries to teach them the correct lesson, but their innocence is too much for him to handle, so he quickly leaves the room with the fish bowl before returning with Richard alive and well again. Just as before, he tells the kids not to wash Richard's bowl ever again. Once again, only Gwen suspects that something "fishy is going on" only to become disappointed with herself when she realizes she made a pun.

On a rainy day at the daycare, Beth returns to the classroom soaking wet and shivering. Thinking Richard is feeling cold as well, Beth decides to warm it by putting the fishbowl on a heater. Chef then enters the classroom to find a group of cats meowing outside the window and the smell of seafood. Realizing what happened again, Chef takes Richard out of the room again, claiming that Richard is late for its doctor appointment. As before, Chef returns to the class with Richard still alive, but refrains from telling the kids the truth over what really happened and doesn't want to hurt them for their irresponsibility. The cycle continues for the next few days, with the kids continuously killing Richard through their naivety, with Chef returning with it still alive and the kids none the wiser. Only Gwen realizes what has happened, but doesn't know how Chef is able to resurrect Richard. She thinks that he might have used black magic, necromancy, or even performed a Frankenstein-like scenario. After thinking how ridiculous the last one sounds, Gwen concludes that all the fishes are dead and Chef replaced them with a new fish.

Gwen confronts Chef at the playground where he is burying the latest Richard and persuades him to tell the others kids the truth. Chef is reluctant as he doesn't want to hurt their feelings so Gwen decides to do it herself. However, Chef stops her before she returns to class. Just then, the kids call Chef about Richard again, this time having been killed as a result of playing Double Dutch. Despite Gwen's insistence, Chef is still reluctant to tell the kids the truth. It isn't until Duncan realizes that Richard doesn't have the tattoo that he drew with permanent ink that the kids suspect Chef is hiding something from them. Once again Chef leaves the room, but before he can return with a new fish, the kids enter his office and find out the truth. Finally realizing what happened, the kids get angry at Chef for his irresponsibility and keeping the truth from them, as it could prevent them from making the same mistake over and over again. Chef realizes his mistake and apologizes to the kids before promising to show them where he buried the other Richards, until Gwen enters his office with bad news. Stray cats have dug up the other Richards and are having a feast. The sight of this 'massacre' frightens the kids and Gwen believes that they will not be eating fish for a long time.

Some time later, Chef introduces the kids to a new class pet, a rock named Rocky. As it is a rock rather than a living creature, the kids are free to play with it however they like without the risk of killing it. The kids welcome their new 'pet' by throwing it up, but Rocky accidentally hits the fan and gets launched into Chef's room where it ricochets around before smashing into the aquarium and the window. This result in a pile of dead fish lying in Chef's office, attracting even more stray cats, much to Chef's horror. In the final confessional of the episode, Gwen admits that she saw this scenario coming all the way as more cats approach the daycare.

While Chef is checking on the kids during nap time, Duncan gives him the slip by escaping the daycare. Only for Chef to grab him, put him back on his sleeping bag, and put his binky in his mouth, and walks away. Duncan gives an angry pout, when suddenly, he falls asleep.

The kids' reaction when they see Richard.

Chef wants the kids to take care of Richard.

Izzy wants to be the one to take care of Richard first.

Izzy sings a song about her feeding Richard.

Richard eats all the food Izzy gave him.

Izzy tells Chef that something is wrong with Richard.

..and replaces him with a new Richard.

The kids look at Chef with puppy eyes.

Harold cleans up Richard and his bowl.

Chef tries to tell the truth about Richard to the kids but he stops when he looks at them..

..so he keeps lying to them and brought in a new Richard to them.

"Something fishy is going on here. Wait, was that a pun? Ugh, so mainstream. I dissapoint me."
- Gwen

Beth goes back into the daycare because it started raining outside.

..and thinks he must be freezing..

..so she puts him on a heater.

The smell of dead fish attracted lots of cats to the daycare.

The kids cheer when Chef tells them Richard is perfectly healthy.

Duncan thinks Richard should be out of his bowl and have fun with them.

The kids take Richard outside the daycare.

Harold and Duncan playing with a new Richard.

Beth and Izzy launch a new Richard into the air.

The kids cheer whenever Chef gives them a new Richard.

Gwen thinks Chef is either bringing the dead fish back to life..

..or he's replacing them with a new Richard whenever they die, and she's sure about the latter.

Chef with all the dead fish.

Gwen wants Chef to tell the truth about Richard to the kids.

Gwen runs to tell the kids about the truth.

The kids tell Chef that something is once again wrong with Richard.

Chef notices that the kids killed yet another fish.

Chef tries to tell the truth to the kids..

.. but they look at him with puppy eyes again.

.. and once again lies to the kids about Richard's well being.

Duncan tells the kids that he put a tattoo onto Richard.

Duncan notices that the tattoo on Richard is missing.

Chef takes Richard from Duncan and runs back into his office.

Beth thinks Chef is hiding something from them.

Chef puts a new fish into a bowl.

The kids see what Chef is doing.

Chef finally tells the truth to the kids.

Beth thinks what Chef did was irresponsible.

Izzy lists all the things they did to Richard.

Chef tells the kids that he buried all the dead fish.

Some cats eat all the dead fish.

Chef and the kids watch the cats eat all the dead fish.

Gwen thinks none of the kids are gonna eat fish for a very long time.

Chef gives a new pet to the kids.

The kids start playing with Rocky.

The kids accidentally kill all the fish that were still alive..

.. which attracts more cats to the daycare.

Everyone's reaction when they see the remaining fish dead.

The episode ends with a lot of cats around the daycare.

Retrieved from "https://totaldrama.fandom.com/wiki/Aquarium_for_a_Dream?oldid=1573575"
Community content is available under CC-BY-SA unless otherwise noted.