Are We There Yeti? 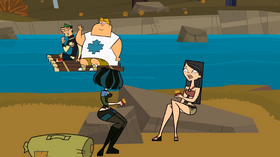 Escape the forest and return to camp before the other team

Duncan
The campers are stuck in the middle of the woods. The challenge is to race back to camp and tag a totem pole. The boys are on one team while the girls are on the other. Since their host isn't there, somebody else takes charge. Another camper is eliminated because of someone's eating habits and someone's bad mood.

The episode begins as the final four campers awaken to find themselves in the middle of the forest. Since Chris is busy hosting a "frou-frou" unnamed awards show, Chef takes over as host for the day. He tells the campers that their challenge is to go back to camp; giving them two bags of items that they will be needed in order to survive the challenge. Gwen is angry because she has been left in the forest with Heather and states that she would rather swim in the shark infested waters of Lake Wawanakwa. Duncan acts like a coward in front of Chef, holding onto him before he leaves and begs for him not to leave. However, this is his guise in order to steal night goggles from Chef; fittingly, Heather thinks he is up to something. Duncan and Owen are paired up, while Heather and Gwen are forced to be partners. Chef then boards a helicopter and flies back to camp, leaving the campers stranded out in the wilderness.

Duncan and Owen quickly run into the forest in order to get away from the girls and confuse them. They check their supplies: a map, binoculars, bug spray and a sleeping bag. Owen thinks it's all good, but notices that there's no food, which greatly upsets him, but Duncan remains calm and thinks they will get out of the forest quickly with the night-vision goggles that he swiped from Chef. The boys quickly check the map and Duncan thinks that they go right while Owen thinks that camp is in the opposite direction. Meanwhile, the girls use a compass and go north. Heather believes they will be fine if they are not killed by Sasquatchanakwa. However, Gwen thinks that it is just a story that Chef made to scare them.

Meanwhile, at the camp, Chef is seen relaxing and reading a book, most likely having forgotten about the campers that are still lost in the forest. Duncan and Owen climb up a mountain and Owen admits that Chef's story scared him, but Duncan thinks that the story is only made up. Then he quickly spots the girls and teases them thinking they are going the wrong way, but Gwen says that their compass tells them to go north where camp is. Duncan checks the map and slaps his forehead, realizing that he and Owen have been going the wrong way and holding the map upside down. Back at camp, Chef goes through the campers' belongings, finding Heather's makeup, Owen's secret stash of candy, Duncan's knife, and Gwen's diary. At the river, Heather and Gwen know that despite the fact that they hate each other, they must work as a team in order to win because they feel that the boys may be bonding. They finally agree and see the boys floating on a raft and getting ahead. Gwen and Heather team up to stop the boys from winning.

Later at night, Heather and Gwen try to get their stuff back, only to find a large foot print. Thinking it is a prank, Gwen jumps in the bushes and is shocked to find out that she is on top of Sasquatchanakwa, who made the footprint. A large chase commences, forcing the four campers to find shelter in a cave full of bats, which chases the campers out. Heather and Gwen accept defeat and the boys offer to let them sleep with them. While the boys set up camp, Heather tells Gwen to let them think they are strong boys. On the other side, Owen asks Duncan if they should trust them, which Duncan responds by telling Owen to trust no one and hides the map under his shirt. The girls act as if they are scared and fool the boys. Heather tells Duncan she can't sleep and starts cuddling with him which he allows.

The next morning, Duncan notices that the map is missing and becomes angry over it. Owen tells him that he has become weak, but smells sticky buns made by Chef and runs toward camp faster than the girls. Unfortunately, he steers clear of the pole and eats the sticky buns while the girls reach the pole and win. Later at the ceremony, Chef has to eliminate either Duncan or Owen, choosing the former. Indignant, but glad to be leaving, he declares that he will be glad to get back to juvie. While he remains bitter with Heather for mocking him and Owen, who burped at his face, he and Gwen part on good terms. As he rides on the boat, Chef scares him repetitively through the use of a Sasquatchanakwa costume.

Chef about to chop Mr. Coconut in hald in the recap of the episode.

Team One: Duncan and Owen

Duncan "begs" Chef not to leave them in the woods alone.

The beds are pulled away.

Heather complains about Chef abandoning them in the woods.

"It's all good except one thing's missing... foooooood!"

Owen stares at the sun through his night vision goggles...

...and is temporary blinded.

Heather is scared from the Sasquatchanakwa.

Heather "would kill" for some bug spray.

Chef is resting at the camp, learning french.

Duncan hits Owen on the head for almost letting him fall.

Duncan laughs at the girls for heading the wrong way...

...only for Gwen replying that they are the ones heading the wrong way.

Duncan pushes Owen off the cliff because he is too afraid.

Gwen and Heather decide to work together.

Owen and Duncan bond over farting.

...and the guys make traps to steal supply from the other team.

Everyone run from Sasquatchanakwa to a cave.

Owen gives his blanket to Gwen.

Duncan is shown to have fallen asleep, despite telling Heather he wouldn't.

Duncan is upset to find out that the girls tricked them.

Duncan and Gwen share a friendly moment after the former is eliminated.

Owen accidentally burps at Duncan while trying to bid him goodbye.

The final three of the season.

Chef dressed as Sasquatchanakwa at the end of the episode to scare Duncan.

Retrieved from "https://totaldrama.fandom.com/wiki/Are_We_There_Yeti%3F?oldid=1644469"
Community content is available under CC-BY-SA unless otherwise noted.