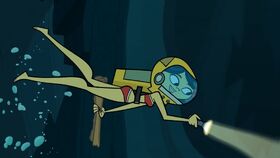 As the three remaining teams are rejoined by a returning squad, they begin a final mad dash to the finish starting with a treasure hunt in the Bahamas. Someone faces a recurring problem that nearly wipes them out; and while someone finally takes some sympathy to help them out, it doesn't help them in the end. Meanwhile, someone gets trapped deep underwater, only just managing to escape alive, but at the cost of their team coming in last place, setting up a three way battle to the finish line!

The teams must now fly to Nassau, Bahamas to receive their next Travel Tip. The Ice Dancers feel confident about their chances of winning, believing the other teams to pose no threat. While on the way to the airport, the Sisters feel guilty about the events from the previous episode and apologize to the Best Friends. The Surfers are excited to get another chance to compete and vow to split the money with the Best Friends if they win. The Ice Dancers are the first to arrive at the airport and force the ticket manager to book the teams on another flight, only for them to arrive before this can happen, resulting in Josee throwing yet another temper tantrum. After arriving at the airport, the teams must compete in an All-In, which involves searching a pirate museum for a Ridonculous Race themed treasure map. A logo will also be located on the treasure map to show that it's a Ridonculous Race map. Once they find the map, they must race on jet skis to the Abaco Islands to receive their next travel tip. While on the way to the museum, MacArthur reveals that she no longer likes Brody, due to his weight gain (described as letting himself go), whereas Brody is still determined to win her over. The Ice Dancers remain calm before they see the Sisters' taxi pass by. Knowing they're in the last place, Josee tries to pressure the driver to go faster, but he responds by turning on the radio loudly which successfully silences the both of them.

Despite being the last to arrive at the museum, the Sisters are the first to find their map with the Surfers not far behind. The Cadets then find a map, though they end up fighting over it with the Ice Dancers. The Cadets then let go of the map, sending the Ice Dancers flying down, thus making the Cadets grab the map. The Ice Dancers find another one shortly after and head to the final challenge. The teams must now compete in a randomized Botch or Watch, which is to be undertaken by whoever is holding the travel tip. The challenge is to search for gold doubloons in underwater tunnels, using a treasure map before their tank runs out of oxygen. Despite being able to get a map before the Ice Dancers, the Cadets fall behind due to Sanders inability to drive a jet ski. However, they make up for lost time once MacArthur takes over. Jacques gets fed up with Josee's attitude, which keeps getting the Ice Dancers penalized, and reveals that he no longer wants to perform with her once they get back home. Meanwhile, Josee has some trouble with the challenge due to being claustrophobic but is motivated by the opportunity to eliminate the Cadets. Despite being the first to find the treasure, Kitty's flashlight gets eaten by an angler fish, which she chases after, and gets stuck amongst the rocks.

Brody finds the gold doubloons and the Surfers are the first to reach the mid-point Chill Zone and must now make their way to New York via water taxi to the airport for the finale. MacArthur finds herself helping Josee after she runs out of oxygen, wanting her team to be the one to take out the Ice Dancers. Kitty ditches her oxygen tank and manages to hold her breath long enough to make it to the surface. The final three teams race to the Chill Zone. Josee then takes down MacArthur by picking up a coconut and throwing it at her, but to her surprise, Sanders manages to carry MacArthur to the finish line resulting in them getting third place where MacArthur confronts Josee for her actions, before Don intervenes and gives them the travel tickets to New York as embark on the course towards their next destination. The Sisters arrive last and Don tells them that they have been eliminated. Emma asks him if this is a non-elimination round, but he tells them they're really out. Emma thinks about her time on the show, admitting that having this experience with her sister and meeting Noah is better than a million dollars, which Kitty is happy to hear while they walk away.

The new final four of the season.

Three Dons appear during the recap.

The Ice Dancers are confident that none of the other teams can beat them.

The teams are headed to the Bahamas.

Emma and Kitty feel sorry for Carrie and Devin.

Brody has gained some weight since his elimination with Geoff.

The Surfers say they will split the million with the Best Friends if they win.

All of the teams are glad when the Ice Dancers reach the airport in last place.

Don introduces the first part of the challenge.

"In your face, Ice Dunces!"

MacArthur laughs at the Ice Dancers after Kitty called them "Ice Dunces".

Kitty reads the Botch or Watch.

Sanders and MacArthur looking for the map.

The Police Cadets and Ice Dancers fight over the map.

The Ice Dancers lose in their fight with the cadets over the map.

Sanders has problems with riding a jet ski.

Josee panics that she has to swim into an underwater cave.

Jacques argues with Josee and threatens to quit as her partner.

MacArthur crashes into the dock.

Josee screams at a fish.

Progress on the contestants.

Emma hears Kitty found the treasure, to the disappointment of the other teams.

Kitty's light gets stolen by an angler.

Brody is the first to finish the challenge.

MacArthur doesn't know she is holding the map upside down.

Josee freaks out when she realizes she is almost out of oxygen.

Josee gets trapped in an air pocket.

The Surfers are the first to arrive at the Chill Zone.

Emma reads the tip which tells her she can send the divers to save Kitty, but if she does so, she and Kitty will get cut from the race.

MacArthur taunts Josee at being trapped in the air pocket...

...but can't bring herself to leave Josee behind.

MacArthur tells Josee she will help her, as she wants to be the one to take Josee out.

Kitty has a plan to get unstuck.

Emma is worried about Kitty.

Kitty manages to get out.

Kitty apologizes to Emma for costing them the challenge.

The Ice Dancers and Police Cadets race in jet-skis.

Josee and MacArthur have another staredown.

...and throws it at MacArthur.

Jacques and Josee come in second.

Sanders and MacArthur come in third.

MacArthur yells at Josee after what she did.

Jacques tells he only has a problem with getting penalized, not with cheating.

The Sisters make their departure.