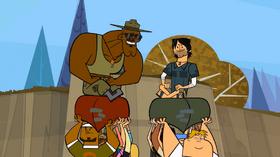 Courtney
Someone forces the teams to go through several difficult obstacles designed to push the campers to their limits. One camper goes too far and ends up being sent to the boathouse by starting a conflict with the "Master Chief". There, he hooks up with another camper, who is not quite his opposite as previously thought. That camper is then voted off the island under mysterious circumstances.

The episode opens to an enraged Harold who comes out from the guys' cabin, demanding to know who made s'mores out of his underwear. Duncan and Geoff laugh at the question while Courtney recoils in disgust when Harold throws the underwear on the ground near her, believing the underwear to be soiled, calling Harold disgusting. Moments later, Chef announces over the PA speakers that he wants all campers at the Dock of Shame at nine promptly.

At the dock, Chef takes up the roles of a tough-talking field Sergeant, announcing that the challenge will be difficult and campers will be slowly eliminated until only one remains standing. This camper will win immunity for his or her team. Insisting that the campers address him as "Master Chief", Chef orders them that when someone wants to quit, they will go to the end of the Dock of Shame and ring the bell. Chef goes on to say that the first day will not end until at least one person quits and with that, he orders everybody down to the beach for the first challenge. On the beach, Chef orders the two teams to hold a canoe over their heads for as long as they can stand to, and if he catches anyone removing their hands from the canoe, they will be eliminated. After noting that lunch will not be served until someone drops out, Chef orders the challenge to begin. With Chef and Chris perched atop each team's canoe, Chef goads the teams at the three-hour point. At one point, Geoff uses a fishing line to rip away Harold's underwear, to Harold's consternation. The challenge goes into the night with Chef telling a story about his time in the army and Lindsay declares she cannot hold it up any longer. Owen tries to stop her, but Lindsay informs him that she can no longer feel her arms. Lindsay heads to the end of the dock and rings the bell with her head due to exhaustion, eliminating herself. With that, everyone drops their canoes and the first part of the challenge is ended. Chef tells the teams to head to the main lodge for food.

In the main lodge, Chef tells the teams that they have ten minutes to eat before night training begins. He tells them that food is the leftover garbage from the morning breakfast and whatever else is in there. Courtney and Heather, for different reasons, balk at eating garbage. Geoff and Duncan give Harold a glass of apple juice, which Harold discovers is actually kitchen grease. Courtney chides them for what they did and hints that she thought Duncan was nice, but Duncan flatly denies the possibility of that. Afterward, Courtney leaves, telling Geoff that's what Duncan wants him to believe, adding "Enjoy your garbage!". Duncan then gives Geoff a sheepish grin, saying that she wants him. Geoff agrees.

Later, with music blaring, Chef leads the campers in a series of dance moves that go on for some time until Duncan unexpectedly turns off the music, and Chef orders him to do twenty push-ups. Gwen requests to use the bathroom. Moments later it cuts to Gwen in the bathroom by herself, with a mop and a bucket, stating this was not what she had in mind. Back at the main lodge, Chef tells the teams that their next challenge will be writing a three hundred word essay about how much they love him and anyone who falls asleep or fails to finish the essay will be eliminated. Two hours later, Chef gathers up the finished essays and sees that Duncan's essay has the word "very" repeating for five pages. Chef is initially upset, but Duncan points out that his essay contains three hundred words exactly. Chef notes Trent and DJ have fallen asleep and he declares them eliminated. Just after Chef tells the campers to go to bed and be ready for a 5 A.M. start, Duncan tries to verbally mock Chef once again and Courtney pulls him aside just as Chef threatens him with fifty laps around the camp.

At 5 A.M., Chef tells the campers that they will run an obstacle course repeatedly until everyone can complete it in less than one minute. The campers set out and Harold is forced to drop out and is sent to the infirmary by Chef after swallowing too much mud. The campers continue running the course with Leshawna being forced to drop out after getting stuck in the mud, with Duncan saying "Fallen soldier, I salute you!". Moments later, Chef gives Duncan twenty more push-ups for his insolence, and a muddy Duncan reacts by thanking Chef and kissing him on the nose. A moment or so later, it becomes apparent that Duncan has pushed Chef too far and he orders Duncan to spend the night by himself in the dreaded boathouse. Others gasp in fear, but Duncan says the punishment is not that big a deal, but regrets his words when he is sitting in the boathouse and observes the sharp objects and teeth all around him, contemplating that he should have kept his big mouth shut.

At the main lodge, Courtney decides she is going to check on Duncan, though she denies that she likes him when asked by Geoff. At the boathouse, Courtney and Duncan talk for a bit before Duncan convinces Courtney to break rules and raid Chef's food supply. As they raid Chef's supply, Chef tells Chris a story about when twenty-five people, including him, went into a forest and how only five came back out. The two load up on food with Courtney leaving a large bass in the middle of the remaining desserts.

Later, the campers hungrily eat the stolen food and Harold discovers that someone smeared peanut butter on his bed in the shape of a smiley-face. Soon after, it is apparent that Courtney is experiencing an energy rush, as Courtney overeats to the point where she gets so filled up, she runs outside to puke. Gwen and Leshawna laugh while she runs. Duncan joins her moments later and Courtney admits that she enjoyed being bad for a change, and that it was so much fun she couldn't stop. Duncan told her that kissing him might be bad. She says he isn't her type, and after they both wish themselves good luck with their contrasting lifestyles, Courtney steals a kiss. Geoff congratulates Duncan, while Harold, watching from a nearby window, glowers. Seconds later, Chef announces over the speakers that the remaining campers will do their next challenge at seven o'clock the following morning.

The next morning, the six remaining campers hang upside down from a tree branch as Chef tells them about the various things they will experience as time passes for them. Duncan is the first to drop out and Heather, citing Owen's farting, willingly drops out, but Owen falls on her moments later when he falls off. Laughing uncontrollably, Courtney drops out and tells Chef to take a chill pill, to Gwen's, Owen's, and Geoff's surprise. Geoff and Gwen are the last two and with Geoff dropping out, Gwen wins the challenge for the Gophers, who run off in celebration while carrying Gwen. As a sign of respect for overcoming all his obstacle courses, Chef gives Gwen a salute and vows that he will go to war with her anytime. Gwen sarcastically agrees with him and leaves with her team.

At the Campfire Ceremony, Duncan, DJ, Bridgette, and Geoff receive marshmallows. The final marshmallow, with Harold and a smug looking Courtney waiting, goes to Harold. This shocks Courtney, Duncan, DJ, and Geoff. Soon after, Courtney, screaming that she does not concede and threatening to sue, is dragged to the dock and tossed on the Boat of Losers. She yells to her team about how she was the team's only hope, and that she was a C.I.T. Duncan argues with Chris, claiming that there were at least three of them who didn't vote her off, while Geoff and DJ nod in agreement, but Chris doesn't change his mind. Before Courtney leaves the island, Duncan runs down the Dock of Shame and tosses her a small wooden skull he carved for her and though she thinks it is a little weird and creepy, Courtney says she loves it and will never forget him. Back at the bonfire, Harold recalls how he, with memories of the various torments he had endured from Duncan, had secretly replaced the votes in the confessional so that Courtney would have the most votes and be voted off as a way of revenge for Duncan's actions against him. The episode concludes with Harold smiling deviously at the camera.

Duncan carving a skull into the cabin with a knife.

Chef immediately demonstrates how strict and hard the challenge will be.

Chef glares at Geoff as he explains the challenge.

Gwen's sharp tongue earns her a scolding from Chef.

Geoff and Duncan prank Harold throughout the episode (again).

"Twenty-five of us went into the jungle that night. Only five came back out."
- Chef Hatchet

... but then yells at her for giving up the challenge.

The campers are served garbage.

Duncan and Geoff offer Harold apple juice, however, it is really kitchen grease.

Geoff fails to grasp how Duncan is nice.

The contestants doing the "Thriller" dance.

Duncan does push-ups on Chef's orders.

Gwen is allowed to go to the washroom...and clean it.

Owen gets stuck in an obstacle.

Geoff crawls under the swinging axes.

The other campers are afraid of what Chef is gonna do to Duncan.

One night of solitary confinement in the old Boathouse for Duncan.

Duncan and Courtney team-up for a midnight food-heist.

Ezekiel's picture can be seen on the back of the milk carton in the fridge.

Courtney throws up after eating too much.

Courtney ruffles Duncan's hair and claims that he isn't her type moments before they kiss.

The campers are forced to hang upside-down from a tree.

Bridgette checking on Duncan after he fell off the tree.

Heather quits to get away from Owen's farts...

Geoff and Gwen are the last campers standing.

Gwen wins the challenge again for the Screaming Gophers.

"I'll keep that in mind when choosing my career!"
- Gwen

The Dock of Shame and the Boat of Losers.

The Killer Bass wait for their marshmallows.

Courtney and Harold are in the bottom two.

Courtney is shocked when she is voted off.

Even Duncan, DJ, and Geoff are shocked.

Chef pushes DJ and Geoff aside.

Chris and Chef throw an enraged Courtney into the Boat of Losers.

Courtney thanks Duncan for the gift and waves goodbye.

It is revealed that Harold rigged the votes, so he could get back at Duncan.

Retrieved from "https://totaldrama.fandom.com/wiki/Basic_Straining?oldid=1648420"
Community content is available under CC-BY-SA unless otherwise noted.