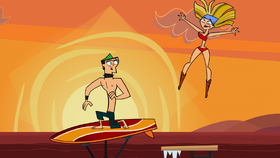 Screaming Gaffers
The teams participate in three beach-themed challenges, with the winners getting a beach party. One team has more luck than the other in the first challenge thanks to a certain someone who unintentionally causes problems for a couple due to his friendship with the girl. The boy also shows a creepy obsession which the girl misinterprets as an obsession with her. The boy's team wins the second challenge, but he throws the tiebreaker round after misconstruing advice from the big guy. Meanwhile, the pretty boy starts making an alliance with the weird girl.

The episode opens with the remaining castmates getting their breakfast the next morning. Heather smiles at Lindsay and Beth, who are trying to find a place to sit, but they ignore her. Trent discovers that Duncan has pranked him by unscrewing the tops off both the salt and pepper shakers, causing all of their contents to pour onto his eggs. Trent tosses the spices over his shoulder to prevent bad luck, but accidentally throws them on Heather, who gets blinded from the salt in her eyes and sneezes uncontrollably from the pepper up her nose, and runs away screaming. Duncan takes an egg off Trent's plate, which upsets him because there are now only eight pieces of his egg left. In an effort to calm him down, Gwen takes another piece, making it an odd number again.

Duncan mocks Trent's weirdness, but Gwen defends Trent and says she likes his weirdness. Meanwhile, Lindsay and Beth sit next to Justin, offering their food; Lindsay brings bacon, claiming it's better for Justin's hair, while Beth brings "facon," claiming it's better for his complexion. Each girl argues about whose offering is better, until Justin tells them that he accepts both. They choose to sit and watch Justin eat, declining to eat themselves since they believe Justin's looks are all they need.

Chris comes in and announces that this week's genre is about teen surfing movies, which no one, except for Harold, is familiar with. The two teams will compete in two challenges, followed by a possible tie-breaker if necessary.

The first challenge is a surfing contest, in which the person who stays on a surfboard over a swimming pool the longest wins for their team. However, to make things difficult, the temperature on set has been turned down to freezing cold, and the challenge features the return of the sharks.

Most of the castmates fail, but some manage to stay on longer, causing Chef Hatchet and Chris to bring in heavy special effects to try and knock them off. Owen manages to break the surfboard, and knock the sharks and all of the water out of the pool when it is his turn, prompting Chris to call a break, not for the castmates, but the sharks. When it is Gwen's turn, she believes she doesn't need to worry about the sharks, but soon finds out that Chris will be firing seagulls at her and the last few castmates using a machine gun. Justin is up next.

Beth tells him to watch his face, and Justin is hit with a seagull and falls in the water, making him blackout. Lindsay and Beth rush to his aid, but they are pushed out of the way by one of the sharks, who revives and hugs him. During Duncan's turn, he stays on the board, knocks the birds aside, and even dodges the equipment Chris starts throwing at him, and, at one point, even Lindsay. Chris declares the Screaming Gaffers the winners, and Gwen gives Duncan a congratulatory hug, which Trent witnesses. Owen notes to Trent how unstoppable Gwen's team is.

The cast is told that they will be taken on a bus to Camp Wawanakwa, but the bus is running late, making the contestants, such as Heather, skeptical about it, but when the bus arrives, Chris tells her he wasn't lying.

At the beach, they must build sand castles for the second challenge. The Gaffers have a great lead due to the half-hour early start they won from the surfboard challenge, while the Grips try hard to get a castle going. Meanwhile, Duncan and Gwen slip away and sabotage the bus they rode to get there so they can spend more time on the island. Back on the beach, the Grips finally manage to start a castle, with Trent devising a plan.

Trent knocks it down while trying to put on a ninth flag, due to his recent obsession with the number nine. Beth reminds her team that it's a "prop sandcastle building contest," and that they can use some of Lindsay's magazines to make a paper-mâché castle. Gwen soon starts to notice that Trent is naming things after her, and is constantly using the number nine (which Duncan claims is because it's the total number of letters in Gwen and Trent's names). After the Grips are announced the winners, a tie-breaking challenge is set.

Chris sends everyone off to gather some wood from the nearby woods. Trent and Gwen meet up in the woods, but Gwen notices Trent carrying nine sticks. She runs away, worried that Duncan is right and that Trent really is obsessed with her. When Trent questions why Gwen is acting strange, Owen claims it's because she wants to win.

The final tie breaker is a "Watusi-Twist-Mashed Potato-Dorky-Old School" dance off. Trent is chosen to go up against Leshawna, who claims she's been known back home as "Leshakenit."

Leshawna's performance is considered poor by the rest of her teammates, except Harold, while Trent is seen as amazing. However, he remembers Owen's words and purposely trips on a branch and starts writhing on the ground to throw the challenge, giving the Gaffers the win.

While the Gaffers are celebrating with a luau, Chris tells the losers to return to the bus, until he finds it's broken due to Duncan and Gwen sabotaging it to stay at the camp for a little while longer. Gwen and Trent meet again later, make up, and are about to kiss when they're interrupted by Owen, who gets branches thrown at him.

The Grips are on the beach shore, where Owen is disposing of the paper mâché castle by eating it. Justin tells Beth that he never got a friendship bracelet, and she gives him the one she is wearing, despite it being sweaty. Justin appreciates the bracelet, nonetheless.

Chris, watching from his control room, says he and Justin are both clever and manipulative and may be related, which is overheard by Justin since the two way microphone is on. When Justin calls this out, Chris quickly cuts the transmission, and ends the episode angrily asking who left the microphone on.

The logo of Total Drama Action appears in the recap.

Chris talking about Gwen and Trent in the recap.

Heather waves to Beth and Lindsay…

…but they ignore her…

Lindsay and Beth gush over Justin.

"With your gorgeous essence to look at, who needs food?"
— Lindsay

Beth chokes on one of her beads in the confessional.

The cap came off the salt, causing it to spill all over Trent's breakfast.

Heather after Trent throws some salt behind him.

Chef creepily smiles as he waves.

Lindsay tries to get sunscreen out of the bottle with her face.

Chef plugs in the giant fan to use during the challenge.

Harold hangs on to the top of the set…

…while a shark tries to eat him right below him.

Harold talks about his "assets."

Lindsay and Justin as they watch Harold doing the challenge.

The sharks beg for bacon and "facon."

Lindsay is whipped off of the surfboard.

Gwen gets hit by a seagull.

When Beth gets angry at Lindsay, she calls her a "Tanorexic."

The sharks fall in love with Justin.

Justin gets hit by a seagull.

A shark attempts to give Justin CPR…

Owen struggles in the challenge.

The sharks get a tea break.

Duncan does well in the first challenge.

…which Owen quickly gobbles down.

The Gaffers laughing about Chris inviting them to remember the "good" times at Camp Wawanakwa.

Harold leading the Gaffers in the Prop Sandcastle Building contest.

Owen panics when the Killer Grips have to start the challenge…

…but Trent has an idea.

Lindsay paints the team logo on a crab.

Gwen and Duncan dismantle the bus.

Tie-breaking challenge between Trent and Leshawna.

DJ, Heather, Gwen, and Duncan are appalled by Leshawna's dancing…

Gwen doesn't look back at Trent while he dances.

Trent tries to continue dancing while on the ground, which Chris doesn't approve of.

Trent shows Gwen some of his dance moves.

Gwen and Trent smile at each other and lean in to kiss.

Leshawna claims that her team didn't need Harold to dance due to her "smooth moves."