Dave (one sided on Dave's side)

Clé Bennett
Beardo was a contestant on Total Drama: Pahkitew Island, as a member of the Waneyihtam Maskwak.

Beardo describes himself as being shy, until he becomes comfortable around someone. While friendly, he tends to "just make noises and be generally bothersome." Although, it appears that he is completely silent, like B, he is merely reluctant to talk at first. He is shown to be quite skilled at sound production, and has even produced his own CD. He hopes that his team can look past his annoying nature and see that he is actually a good person. The opposite occurs however and his odd behavior and lack of contribution to his team ends up leading to his elimination in So, Uh This Is My Team?.

His audition tape shows that he may have problems concerning socializing, and would rather be alone and play music until he feels close to someone, then they can see that he is a better person than he seems to be at first sight. Despite his early elimination, he is shown to have enjoyed his time on the show, as his last words exclaimed are that he enjoyed meeting all of his teammates.

Beardo's only appearance is in So, Uh This Is My Team?, where he makes his debut along with the rest of the new cast. He is placed on team Waneyihtam Maskwak along with everyone else who didn't get an actual parachute. Beardo spends the majority of the episode making sound effects at inopportune moments, much to Dave's annoyance. He does little to help his team and they end up losing the first challenge. At the first elimination ceremony of the season, Beardo receives the majority votes and is eliminated, much to Dave's satisfaction. Just as he is shot out of the Cannon of Shame, he quickly states he enjoyed meeting his team.

He is mentioned by Sky in This Is The Pits!, when she finds a CD of his beatboxing in her team's backpack of supplies.

Beardo is mentioned again in Scarlett Fever, when Chris states that Scarlett is "even more eliminated than that beatbox guy".

Beardo is mentioned in Lies, Cries and One Big Prize when Shawn listed the contestants that would be helpful in the finale challenge.

Beardo starts his audition by beat-boxing. He introduces himself and, in rhythm to the music, tells how he is pretty shy and that, until he warms up to people, he tends to speak through sound effects and ends up being bothersome. He hopes that if he's chosen that his team will be able to see past this and see what a great guy he really is. 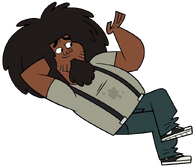 Beardo on the ground. 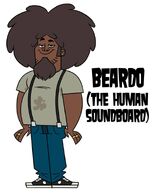 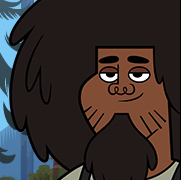 Beardo, along with Leonard, annoying Dave in the theme song.

Beardo doesn't have an actual parachute.

...and ends up getting shot in the groin.

Beardo, after Dave tells him to "zip it" when he makes trumpet sounds during his team's tower presentation.

Beardo in the bottom two.

Beardo takes the Cannon of Shame.

Beardo's cameo on a CD in This Is The Pits!

Beardo's cameo in Lies, Cries and One Big Prize.

Retrieved from "https://totaldrama.fandom.com/wiki/Beardo?oldid=1575991"
Community content is available under CC-BY-SA unless otherwise noted.