Total Drama Wiki
Register
Don't have an account?
Sign In
Advertisement
in: Episodes, Total Drama: Revenge of the Island episodes 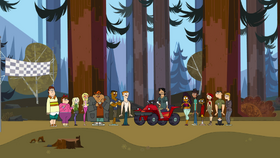 All contestants from previous seasons, minus Blaineley

Staci
The fourth season begins, introducing a whole new cast, set on a familiar island, which has been turned into a biohazardous waste dump. The thirteen contestants are divided into two teams. Two contestants build a close bond, while one contestant manages to annoy her entire team into eliminating her that night.

The episode begins with an introduction from Chris, saying they have been to the movies and around the world, explaining that the season will take place once again at Camp Wawanakwa; however, this time, the season has a few changes since they have been away, meaning that things have gotten dangerous, right as an intern, who brought Chris a drink, is taken down by the arm of a giant octopus. The rules of the game remain the same: contestants will have to face against each other, vent in the confessional, compete in life-threatening challenges, and risk getting eliminated — all this in order to win a one-million dollar prize. Next, Chris introduces an all-returnee cast that are in different sides of a yacht:

However, Chris then announces that they will not be competing this year, as the yacht floats past the island, with Owen screaming "No!" Instead, thirteen new contestants are then introduced from a different yacht arriving to the island.

A quick introduction for each of the new contestants is given. The viewers are first introduced to Jo and Scott, the former telling the latter to stay out of her way. Mike and Zoey are introduced, only to be interrupted by Lightning. Brick catches Zoey after she is pushed out of the way by Lightning, but drops her to give a salute when his name is announced. B and Dawn are then introduced, followed by Dakota, who blows a kiss to the camera. Anne Maria is introduced while applying spray tan, but Dakota pushes her to hog more screen time, only for the latter to spray her face in retaliation. Staci brags about her aunt having invented fake tanner, because of which Anne Maria sprays her face as well. Cameron is then introduced, but is knocked over by a flock of birds, followed by the final introduction, Sam. But to make a more interesting welcome, Chris activates a bomb, destroying the yacht, causing the cast to fall into the water.

The contestants swim back to the shore of the island. Cameron is seen drowning in the lake, but Lightning saves him while calling him a "little girl" in the process, causing Cameron to protest. Staci starts drowning, as she was wasting her energy telling lies. Mike and Zoey both say that they'll help Staci, but she takes her hand and puts it on Mike's head, drowning him. Zoey saves them both.

Meanwhile, Jo cheers in excitement when she believes she is the first to reach the shore. However, Dawn is already at the shore, since she used a shortcut and didn't even get wet. Brick is the third to make it to shore. B, who was unknowingly carrying Cameron, makes it to the shore fourth.

Once everyone makes it ashore, they chat for a short moment. Chris announces that the contestants should follow a path into the woods, and then signals off a horn to awaken the beasts that have become inhabitants of the island. The cast screams as they run away from the loud rustling in the distance. After they have followed the path, they are united with Chris awaiting at a finish line, who also introduces the McLean-Brand Chris Head, which he is going to hide somewhere on the island. It is an item that, when found, will allow the contestant who finds it to stay in the competition even when voted out. Then, the contestants crossing the finish line determined which team they would be placed on, either Team A (Toxic Rats) or Team B (Mutant Maggots).

After the team names are revealed, and Mike asks why there are so many references to chemical waste, the contestants are startled by the sound of a monster howling loudly, but it turns out to be a squirrel blinking horizontally, making Dakota scream, and Dawn asks what is wrong with the squirrel. Chris explains that, while they were gone, he rented the island to a family-oriented biohazardous waste disposal company, which is having an impact on the flora and fauna. Dakota tries to get close to the squirrel, saying she wants one, but the squirrel roars and tries to attack her with its laser vision. Dakota is startled and jumps onto Sam's arms, prompting Chris to laugh at her.

After that, Chris then gives out rewards for those who crossed the finish line first. Due to Jo crossing first, her team wins a trampoline, and Lightning, the second to cross, gets a hacksaw. From there, they must cut down a totem pole that is hanging from a tree, with a timed bomb strapped to it, which would detonate in seven minutes, unless they cut it down, slide it down a hill, and place it on a tree stump between the cabins. After both teams have successfully cut down their rope, they must place it on the river and ride it down a waterfall and onto a slope.

Meanwhile, as Lightning begins climbing the tree and B comes up with an idea, Staci blabs about her third cousin — Jack, who could give them some tips on barehanded tree climbing — and her great, great, great aunt Dora, who taught native Canadians to carve totems. B takes her away by the arm, relieving her teammates. As part of B's plan, he suggests she should stand on some stick that works as a seesaw, while he places Sam further away, as he jumps on the opposite side of the seesaw, making Staci land perfectly over Sam's shoulders, who are amazed at him. Lightning, who was climbing, painfully falls down from the tree, with the saw still in his hand.

Back with the Maggots, Brick jumps on the trampoline to try and retrieve the axe that is stuck in their team's totem but can't get down, annoying both Jo and Anne Maria. When Mike notices the plan is not going to work out, Chester comes out, telling them to cut off the rope, and an irritated Anne Maria tells them that is the plan, calling him "Mike," to which Chester responds that isn't his name, confusing Anne Maria and Zoey.

B keeps stacking his teammates with his strategy, until Sam suggests one more person will do it, calling for Dakota, who is posing for her, until Chris cuts down a tree to interrupt her. Meanwhile, Brick is next to a mutant squirrel, which attacks the entire team right after Chester throws a rock at it. In the process, the squirrel shoots a laser which cuts the rope. When B manages to get Dakota on the top of her teammates, Dawn hands her the saw, which Dakota has no idea how to use until Dawn tells her to "imagine it's daddy's steak knife," which she does, successfully chopping off their totem.

The Toxic Rats are in the lead and make it down the slope first after both teams went down a waterfall, which excites Cameron, as it is his first time in a waterfall, while Chester claims it could be their last. Once the Maggots land on the ground, Zoey, who is in the back, almost falls off, holding to the edge of the totem. Once she calls Mike for help, Chester reverts to Mike as he gasps for air, and pulls her in to safe her. B has his team lean forward to pick up speed and pass the Maggots.

While they are racing on their totems, Owen manages to swim back to the island and asks Chris why the yacht carrying him and his fellow "classic" contestants wouldn't stop. Chris tells him that they have outlived their usefulness and would not be competing this season, ordering Chef to stick a bomb on his face, causing Owen to blast off the island from the explosion. Meanwhile, the Toxic Rats arrive first and get to choose between a luxurious cabin and a regular cabin akin to the cabins. However, once the Toxic Rats choose the former, the Mutant Maggots come into the campground soaring and their totem pole crashes into that cabin, thereby destroying it. Chris announces that, since the Maggots' cabin is the only one still standing, they won the challenge. A new cabin which is just a plain old cabin replaces the new one immediately via helicopter.

The Rats are then taken to the first elimination campfire ceremony of the season, where Chris announces that this time instead of the eliminated player not getting a marshmallow, that player would get the Marshmallow of Toxic Loserdom. Scott, Lightning, B, Dawn, and Sam receive regular marshmallows in that order. This leaves Dakota, who wasn't focused on competing, and Staci, who annoyed everyone by constantly talking. The Marshmallow of Toxic Loserdom goes to Staci, who becomes the first eliminated contestant of the season. Staci asks if that means she has to go to the Dock of Shame, to which Chris replies by announcing that this season's voted off players leave the game by the Hurl of Shame. Staci talks about how one of her ancestors invented catapults, but before she can finish, Chris hurls her with the catapult.

Lindsay and Tyler make out while Beth admires Justin until a bird poops on him.

Jo and Scott are introduced.

Mike and Zoey gaze at each other upon being introduced.

Brick catches Zoey when being introduced.

Dawn tells B his aura is purplish-green when they're introduced.

Dakota pushes Anne Maria after the camera pans to her…

…and Anne Maria retaliates by spraying Dakota to the ground.

Anne Maria then also sprays Staci to stop her from talking.

Cameron observes the nature upon being introduced, seconds before the birds attack him.

Sam plays a video game when he arrives.

Mike is the first person to use the confessional on Total Drama: Revenge of the Island.

Dakota posing for some "non-essential" photographers.

Dakota waves to the photographers.

Dakota ends up in Lightning's hand shortly after he saved Cameron.

Dawn is the first to reach the island.

Jo beats Brick back to the shore.

Majority of the cast on the shore.

Staci lying about her family after reaching the shore.

Sam finally reaches the shore, holding his GameGuy and upchuckong a fish.

Dawn comforting Zoey for being a lonely only child.

Lightning jokes around about upsetting the bunnies when Chris tells the contestants to not disturb the wildlife.

The Toxic Rats are formed.

The Mutant Maggots are formed.

The McLean-Brand Chris Head is introduced.

Chef with a hacksaw.

Chris scares Zoey and Mike with a bomb.

…but slams into the totem pole…

B stacks his team mates on top of each other.

Dawn stands on Lightning while holding the saw.

…which helps him to get his team's totem pole to the ground.

Dakota learns how to use a saw.

The Mutant Maggots riding their totem.

Mike saves Zoey from falling off their team's totem.

Zoey thanks Mike for saving her.

Owen freaks out when he finds out he and the others won't be competing this season.

… which causes him to get blown away.

The Toxic Rats cheer when they believe they won the challenge.

…which works as a result.

The first elimination ceremony for the Toxic Rats, and for the season.

The bottom two are Dakota and Staci.

Staci loses her hair as a result of holding the Marshmallow of Toxic Loserdom.

Staci takes the Hurl of Shame.