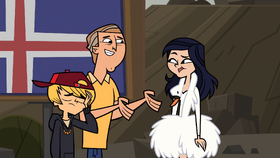 Correctly repeat an Icelandic phrase after running across a field of geysers
Either eat an Icelandic Thanksgiving meal (Feast), or collect a fossil in the ice caves (Fossil)

Still in Iceland, the fifteen teams break past geysers and an Icelandic language barrier. Someone ends up forcing another into doing their bidding, nearly blowing it for the both of them in the end; while another suffers due to arguing with their teammate but still survives. One group does surprisingly well in the culture, shockingly taking first place; while two others lose because of a troubled team, then sacrifice their principles only for it to be revealed they didn't have to, making one blow their top while the other blows chunks.

The episode begins with the teams continuing the race from Iceland's Chill Zone in the order they are placed in. The Ice Dancers rapidly race to be the first to depart, but unfortunately, five other teams arrive right behind them. The Ice Dancers argue with the teams, but begrudgingly accept their fate. As some of the other teams begin departing, the first bus arrives at the Geyser Field. The teams must compete in an All-In, in which they must hear Don say an Icelandic phrase, run across the geyser field, and repeat the same phrase to the Icelandic local girl to get their next tip.

As the challenge starts, the second bus departs carrying six more teams, and the final three teams await for their turn. The Ice Dancers are the first to correctly repeat the phrase and take a helicopter to Skaftafell National Park to find their next tip. As the last three teams depart, Geoff reveals that Brody is still incapacitated from his electrocution last episode, forcing Geoff to carry Brody throughout the challenge. At the bus stop, the weather reminds Devin of a time when Shelley locked him out in the snow over a misunderstanding. This angers Carrie and makes her dislike his girlfriend even more, stating in an interview that Devin deserves better. Meanwhile at the geyser field, the Reality TV Pros lose time after Owen gets stuck in one of the geysers. Meanwhile, Father and Son are unable to correctly repeat the phrase, due to Dwayne continuously messing up, forcing them to go back to rehear the phrase. The Vegans have better luck, getting it on the first try. The Stepbrothers and the Mom and Daughter are unable to correctly recite the phrase, to which Taylor blames her mother and forces her to go back by herself. However, the Goths are have no trouble saying the phrase, as Crimson reveals that most of their favorite bands are Icelandic, and as a result they've easily picked up the language.

The Fashion Bloggers easily get the tip after Jen compliments the local's choice in fashion without the need to say the phrase. As more and more teams continue to get the phrase wrong, Stephanie in particular gets frustrated with her and Ryan's failure, and her over-competitive side comes to light as she begins to angrily yell at him. Eventually, the Sisters take their turn at the phrase, and as Emma struggles to say it, Kitty jumps in and helps her complete the phrase. However, Emma stubbornly scolds her sister, believing she almost ruined their chance and continues to doubt her ability to help. After telling Kitty to stop helping her, the Sisters are the last of the first six teams to board the first helicopter to the National Park. The teams soon arrive at the park, and must now compete in an Either/Or, where they must either dine on a traditional Icelandic feast, or find and retrieve one of the Icelandic fossils embedded in the walls of an ice cave. While most teams decide to search for fossils, the Goths decide to take on the Icelandic feast. The Vegans decide to use "Reiki" energy in order to free their fossil while the other teams use traditional means with ice pickaxes. More teams get the tip at the field, and after Kelly finally returns by herself to repeat the phrase, Taylor continues to mistreat her as they are running behind, and six more teams depart on the helicopter.

This leaves the Daters and Father-Son as the last two teams in the field, and Dwayne becomes more and more infuriated as he fails to repeat the phrase. Stephanie however, finally gets the phrase correct, and aggressively fist bumps Ryan, hurting his hand. Tired of his father constantly getting it wrong, Junior covers Dwayne's mouth and correctly says the phrase himself, finally getting the next tip. Back at the park, the teams that chose feast are disgusted by their meal, and Taylor and Kelly struggle to not vomit as they switch challenges. However, they instantly switch back after Dwayne slips on the ice and almost gets impaled by his ice pick. Several of the teams struggle with the feast; with Geoff being forced to feed Brody (who is still paralyzed from his electrocution), and Rock having to force feed Spud due to his laziness. The Goths eventually finish their meal with ease and arrive first to the Chill Zone, winning the challenge. Despite Don not liking their unenthusiastic nature, the Goths state in an interview that they are very happy to have won the challenge.

More teams make it to the Chill Zone, and despite the feast being too gross for even Owen to handle, the Pros finish in fourth place. As the Vegans slide their fossil through the cave, they stop momentarily to thank the "fossil spirits." This, however, causes the fossil to slide back down the cave and they chase after it. Meanwhile, the Mom and Daughter make it to the Chill Zone, but are given a one-hour penalty due to Taylor not running back with her mom to redo the phrase. Back at the caves, Dwayne and Junior unknowingly find the Vegans' fossil and carry it out of the cave, though Junior has doubts on if they should and Dwayne assumes that declines any situations before they leave the caves while the Vegans are still finds their fossil. After reaching the Chill Zone, the Vegans found and catch Dwayne red-handed then demand their fossil back, which Junior, who's suspicions are proven to be true. Dwayne regrettably offers the fossil back to them; however, Don refuses to let the Vegans take it back, forcing them to try again. This throws Laurie into a fiery rage at Dwayne for stealing their fossil. Due to this setback, the Vegans are forced to betray their principles and eat the feast in order to finish in time. This horrifies Miles, and as they devastatingly do this, more teams reach the Chill Zone. Kitty keeps her promise not to help Emma and forces her to push the heavy fossil by herself as they arrive tenth.

Meanwhile, Taylor scolds her mother for not taking charge and allowing her to be in control. However, when Kelly tries to do so, Taylor immediately rejects her. Eventually, Taylor and Kelly's penalty comes to an end as the Rockers and Vegans race to the Chill Zone. They manage to get thirteenth place. The Rockers arrive right after, getting fourteenth. This puts the Vegans in last, but Don reveals that it is a non-elimination round, meaning that they're safe. Much to Laurie's anger, who believes she went against her principles for nothing, she proceeds to beat up Don. Don signs off the show before screaming for help in terror, while the horrified Rockers with Kelly and Taylor watch the scene. Miles then walks by and throws up near Spud on the ground, much to his disgust.

Josee reads the next travel tip.

Don introduces the local that will give the tips to the teams.

Owen gets stuck in one of the geysers...

The Daters cross the geyser field.

The local is unamused after Dwayne says the sentence incorrectly and tries to hit on her.

The Adversity Twins after a geyser blows on them.

Chet and Lorenzo get in another fight after failing with the sentence.

The Police Cadets get their Travel Tip.

Stephanie's temper is shown again after she fails.

Devin's foot gets stuck on a geyser.

The Sisters receive their tip.

The first six teams arrive on the helicopter.

Rock tries to say the sentence...

The Best Friends get their clue.

The Stepbrothers almost high five when their plan succeeds.

The Adversity twins receive their clue.

Kelly gets the sentence right, earning the clue.

Kitty takes a selfie with the frozen Sasquatchanakwa.

The Fashion Bloggers trying to walk on the ice slowly.

...and Josee seem to be enjoying the ice.

MacArthur breaks a fossil with her strength.

The Vegans use "Reiki" energy to free a fossil.

The Sisters get their fossil.

Dwayne fails again with the sentence.

Stephanie's brags when she gets the phrase correctly.

Junior says the sentence before his father.

The Goths eating the feast.

...and eats it with no concern at all.

The Daters eating the feast.

The Vegans take a rest.

...while the Ice Dancers reach third.

Mom and Daughter are penalized.

Taylor scolds her mother for getting a penalty.

The Sisters bring their fossil to Don.

Don forces the Vegans to repeat the challenge.

Dwayne is yelled at by an angry Laurie...

..who for once isn't acting kind.

The last three teams race to the Chill Zone.

The Vegans arrive in last.

Laurie is angry when she learned that she ate meat for nothing.

Don gets beaten up by Laurie before he signs off.