Justin (one-sided on Justin's side)

Dan Petronijevic
Brady is Beth's boyfriend since Total Drama Action. Initially, no one believes her when she claims Brady is her boyfriend and even gets to the point to doubt his entire existence. However, he finally makes an appearance in the season's finale after the winner is declared (in both endings), proving that he really does exist and that Beth has been telling the truth the whole time since she first spoke of him.

Brady is first mentioned and seen when Beth shows a picture of him in Masters of Disasters. During the beginning of this episode, as everyone in the craft services tent complains about Chef's food, Beth brings up Brady, saying that he is a professional cook. She constantly tells everyone about Brady's alleged acts and occupation. Izzy, Heather, Justin, Leshawna, and Lindsay are the first to jump on this subject as soon as Beth says the word "boyfriend." Heather recalls no talk about Beth having a boyfriend before this. Leshawna notices Beth only saying the word "boyfriend" and not his name, so she then asks her when they met. Beth answers that they met between Total Drama Island and Total Drama Action. Lindsay points out that the span between the two seasons was only two days, making it very unlikely she got a boyfriend in that amount of time. Beth claims they met in the orthodontist's office for the same reason: to get their braces off. Beth shows the Killer Grips a framed photograph of Brady, but her team laughs at her. In the confessional, Izzy jokes that she'll buy anything off of late-night infomercials, but she won't buy that.

Heather asks her what he's like, and Beth claims that she's memorized all of the basic facts about him, such as his weight and height, and starts telling them all of these traits. However, Justin swipes the picture from her and sees that all of the attributes are simply on the back of the photo, revealing that it's a model comp card. Beth's lie and the fact that the person in the picture is confirmed to be a model makes the others even more confident that Brady is not Beth's boyfriend. Leshawna starts worrying about Beth's love life, as she's been chasing after a "boyfriend" with a "honey" (referring to Brady) back home. Beth replies by saying she can't help herself when it comes to Justin, as he is a supermodel, while Brady is just a regular model.

Later, when the first challenge is about to start, Beth talks more about her boyfriend, but Izzy still says that she won't believe it. Even during the first challenge, Beth talks continuously about Brady to the point where Justin accuses her of making up Brady. While everyone panics about the rising water level in the "sinking submarine" of the second challenge, Beth continues to share Brady's success stories. Izzy also gets upset and accuses Beth of making up Brady. Beth mentions that Brady is a certified "underwater photographer." Justin claims that his agent wants him to learn how to hold his breath underwater for an extensive amount of time. Around this time, Beth mentions that her boyfriend's name is Brady and that he could teach Justin. Brady is mentioned again in Ocean's Eight - Or Nine, when Beth says that Brady cracks his knuckles a lot. She tells Lindsay and Justin that some people find it weird and gross, but she believes it's adorable. She also says that she tried to flirt with him at the orthodontist by grinning at him when he sat in the direct opposite chair she was in. Unfortunately, Beth says that Brady mistook it as "ouchie faces," or faces people make when they are in pain. She then says Brady was immediately attracted to her once she sprayed on some of her chicken-scented spray called "Desperado, the Fragrance of Last Resort."

Beth also mentions Brady again in One Million Bucks, B.C., but she doesn't say much about him. She protests against Courtney for getting special treatment by saying, "I'm the one with the boyfriend!" Beth mentions Brady again in Million Dollar Babies. She tries to use Courtney's personal digital assistant to contact him, which provides evidence towards his existence, as it wouldn't make sense for Beth to contact him secretly if she knew he wasn't her boyfriend. This is further proved when Leshawna taunts her during the badminton challenge against Heather, saying that her chances of winning are about as real as her boyfriend, which sends Beth into a fit of rage, helping Beth's team win the challenge. When trying to get Harold's vote in Super Hero-ld, she reveals Brady has two dogs, both named Steve. In Crouching Courtney, Hidden Owen, Beth sleeps with a picture of Brady. Courtney allows Beth to use her PDA so she can contact Brady in an attempt to manipulate Beth into an alliance with her. They flirtatiously argue over who misses the other more, somewhat proving Brady's existence a little more.

In 2008: A Space Owen, Beth receives a cherry-flavored candy ring as a gift from Brady, which is supposedly a promise ring. His relationship with Beth ends in this episode as Beth develops a crush on Harold. However, in later episodes, he is still mentioned in ways that suggest their relationship.

Brady is briefly mentioned by Beth in Mutiny on the Soundstage. She states that if she wins, she will share the money with him and Lindsay. Brady appears in person for the first (and currently the only) time at the end of The Aftermath: IV in both endings, hugging Beth after the season's winner is revealed. The contestants are quite shocked to find out that he actually exists, with Heather even noting how handsome he is. In Beth's ending, Justin is also very jealous of him and even regrets voting for Beth because of it. She tells Brady that she has all the reward that she needs. In Duncan's ending, she says that she has all the prize she needed, prompting him to ask if he was supposed to bring a prize. However, she simply smiles and says that she "loves losing," and the two continue to embrace. 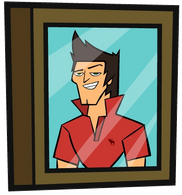 A picture of Brady.

Beth holding a picture of Brady.

Brady makes his way to the Aftermath studio.

Brady thinks he was supposed to bring a prize.