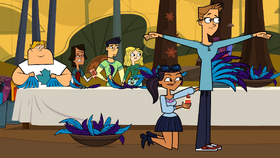 Traveling to Brazil, the teams must traverse the jungles and show themselves off in order to make the next leg of the race. Two competitors end up in an unlikely alliance with two others that doesn't last while two racers go through the torture of immense pain. One tries to face down their own grief for a previous incident, leading to their partner to take full charge, but this ultimately leads to a penalty and a karma filled defeat.

The episode opens with the Goths departing from the Chill Zone as the teams must now travel to Brazil via airplane. The first eight teams take a direct flight, while the last seven are forced to fly with a two hour delay, along with animals. Fortunately for the latter group, Dwayne accidentally leaves the remains of his broken fossil on the runway, bursting the plane's tire and causing a delay for the first flight after he plans give it to his wife as a present and Junior expresses his guilt over the fossil after the previous challenge; Dwayne also admits his mistake for it, too. Meanwhile, on the second flight, Taylor is disgusted at having to travel with animals, threatening to quit the competition as she kicks a goat and walks away. To avoid that, Her mother bribes her to stay by offering to buy her a new car. After Taylor hears this, she immediately runs back, though the goat returns to headbutt her moments later. As the second flight lands in Brazil, the Adversity Twins experience lactose intolerance, due to being in close proximity to cows. The teams must now compete in a "Botch or Watch" in which they have to retrieve their next Travel Tip. One of them must stick their hand inside a mitten full of bullet ants to do so.

The Vegans are the first to take on the Botch or Watch; however, Mickey accidentally pushes Laurie to which she lands face first into the mitt, thus gets bitten in the face by the bullet ants (after the twins tries to do their high-five). Her face swells up to hideous proportions and remains that way for the rest of the challenge where everyone becomes horrified at this. The teams must then find a way across a gorge and search amongst the piles of coconuts to find their next travel tip, which nobody was interested. Back at the Botch or Watch challenge, Mickey gets intimidated by Taylor, but Kitty comes to his defense and tells her that Mickey was there first. The Adversity Twins are grateful for this, and Mickey reaches into the mitt to give Kitty an extra travel tip, resulting in Kitty taking a selfie with Mickey. Emma disapproves of Kitty's friendly advances towards the twins and reminds her of their "no alliance" rule, but Kitty retaliates that Emma only acts this way due to being hung up from her boyfriend, Jake, breaking up with her. The Vegans encounter trouble after they are unable to get across the cliff and lose their lead, while some of the other teams are successful and twins aren't successful when their vine snap off and they both plummets down the ravine. The Rockers face no difficulty getting through the first challenge, thanks to Spud's delayed pain reaction.

The first plane finally arrives in Brazil and the Ice Dancers gain an early lead. The Police Cadets are unable to find the tip during the coconut challenge, because of MacArthur refusing to let Sanders help in the challenge, despite her bloated hand from the previous challenge. Sanders uses a mallet and manages to find the tip, despite MacArthur's wishes. As the teams from the first flight compete in the "Botch or Watch", Kelly takes charge for her team aggressively which helps strengthen her relationship with her daughter, but this doesn't last for long anymore. Although the Vegans are finally able to climb back up the cliff, Laurie's hideousness provokes the frightened Taylor to throw a coconut at her, which sends her flying off the cliff again. While doing this, the coconut cracks, giving The Vegans' their next tip and Miles thanks Mother Nature for it. A clumsy move from Spud helps the Rockers and Best Friends get across the cliff. The Daters; however, don't have the same luck as they fall down.

The teams get started on the "All-In" crafting challenge. Kitty gets her sister to form an alliance with the Adversity Twins, albeit a trial one. The Surfer Dudes are the first team to complete their Brazilian costume and must now make their way to Copacabana beach, which will be the Chill Zone for this leg of the race. As the final teams begin wrapping up their coconut search for the tip, Father and Son compete against the Ice Dancers for a tip. Luckily for them, both manage to get one in the fight. With Miles taking control of the Vegan's team, they manage to make it to the Chill Zone. However, they find out they get a thirty-minute penalty, because Miles sewed both parts of the costume. This leads the Ice Dancers to get first place. Josee is about to mock the Vegans for losing, but both she and Jacques get scared when they see Laurie's face.

As more teams glide across the finish line, the Sisters and Adversity Twins crash into each other and tie for seventh and eighth. Emma then terminates their temporary alliance, with Kitty agreeing with her, along with The Adversity Twins. All seems well for the Vegans, before Spud's pain reaction begins to act up, which helps him and Rock cross the finish line at a quicker pace. This makes the Vegans the last team to arrive, and they are cut from the competition. This leaves them visibly disappointed about not fulfilling their promise to help their several causes.

Dwayne with the fossil from the previous episode.

The Ice Dancers are mad due to not coming in first last time.

Owen is so nervous at flying that he starts chewing Beary.

The teams in the second plane travel with animals.

An angry Taylor kicks a goat...

...and the goat headbutts her as a revenge.

Even being near cows...

The Cadets and the Rockers receive their tips.

The other teams' reaction to Laurie's face.

Mr. Coconut makes a brief cameo on the coconut pile the teams must arrive to.

The Stepbrothers receive their tip.

MacArthur gets the tip.

Taylor threatens Mickey to get the tip first...

...but Kitty reminds her that he was there first.

Taylor gets the tip .

The Vegans cross on a vine...

The Cadets cross the ravine.

The Daters arrive at Brazil.

Jacques gets the tip.

The Cadets get their next tip.

Don introduces the local that will give the contestants their next travel tip.

Geoff explains why he put both hands on the ants' mitten.

Mom and Daughter get ready to cross.

The Twins climb up the ravine after they fell.

The Ice Dancers swing on a vine...

...and manage to reach the other side.

The Twins find the tip.

Brody happily swings over the ravine...

...but painfully crashes after crossing.

Kelly covers her armpit under one of her daughter's orders.

Miles tries to get Laurie up.

The Goths get their tip.

The Best Friends also cross on the tree, that's about to break.

The tree breaks, while the Daters are crossing it.

The Goths swinging on a vine.

The Cadets' first costume gets rejected.

The Sisters talk about forming and alliance with the Twins...

...who are shocked after Emma's words.

Ryan climbs the ravine with Stephanie on his back.

Noah pokes Owen after he swallows a coconut.

The Surfers finish their costume.

The Best Friends find the tip...

The Vegans finish their costume.

The Stepbrothers are also done with theirs, and end up glued together.

"Give us beads, sparkles and a theme, we'll skate your dream"

Crimson explains why bright colors are not for her.

The Goths finish their costume...

...along with Mother and Daughter...

Teams flying towards the Chill Zone.

...but it's Ice Dancers the ones who actually get first place.

The Ice Dancers celebrate their victory...

...but are horrified by Laurie's injury.

The Stepbrothers argue before jumping.

The Goths arrive at the chill zone.

Other teams arrive at the chill zone.

...and Twins prepare to jump.

and the Twins crash land at the Chill Zone.

The Vegans' penalty is almost over.