View this page for her Total Drama counterpart.

Bridgette is one of the children attending the daycare center.

Like her older self, Bridgette is a kind-hearted girl and probably the nicest child in the daycare. She is excessively kind to the point where she supported Gwen in Tiger Fail despite not sharing her goal only because everyone else was against her. She values friendship very highly and is always there to help her classmates even if she is unable to understand the situation. She is often seen having a tea party with her friends during her free time.

In Cluckwork Orange, Bridgette is reading a book by herself when suddenly out from nowhere, Jude's chicken, Nugget, attacks her for no reason with a pair of nunchucks and bombards her with eggs. Confused over what happened, Bridgette asks her friends what is going on. The attack on Bridgette opens Jude's eyes that his chicken is out of control. After Jude releases Nugget, Bridgette consoles him for making a tough decision.

In Free Chili, Bridgette takes pity on a starving Owen and offers to share her lunch with him, only to learn it is a bad idea as Owen devours all of her food. Later, Bridgette wonders why some of her friends are fighting over a chili dog and offers to help them, only for Beth to use her balloon to send the chili dog to safety.

In The Date, she is the one who points out that if Chef got a new girlfriend, he'd be in a better mood. However, when Jude chose to make up a fake girlfriend for him and the others agreed to it, Bridgette had doubts about it, only doing so when Duncan said it could be a secret admirer who would make him feel special.

In Cuttin' Corners, after Chef announces that it is cake time and the kids are calling out hoping to get a corner piece. Bridgette, along with Jude, tells everyone to clam down and that they should just be happy with whatever slice of cake they recieve. Touched by this, Izzy then tells both her and Jude that they get a corner piece. Much to the frustration of Duncan, Leshawna, and Beth, they object to this as they are supposed to be Izzy's best friends, but Izzy replies that she never promised them corner pieces.

Bridgette asking someone a question. 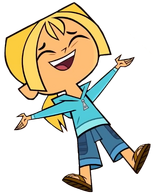 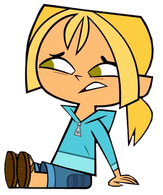 Bridget with a water blaster in the opening credits.

Bridgette is beaten up by Nugget.

Jude and Bridgette after Nugget shoots eggs at them.

Bridgette asks the kids what are they fighting about.

Bridgette thinks it's mean to mess with someone's personal life.

Cody and Bridgette having a tea party in Cuttin' Corners.

Bridgette thinks that it's Courtney's decision if she wants to share her toy with others or not.

Bridgette and Cody throwing up.

Bridgette wants Gwen to come to her house so they can play.

Bridgette rooting for Gwen to win "The Quiet Game".

Bridgette asks Gwen if tiger tail was worth waiting 78 years.

Bridgette notices that her mom forgot to cut her sandwich in half.

Bridgette gives the piranhas back to Izzy.

Bridgette sees a worm on her way and accidentally eats it.

Bridgette can't get the taste of the worm out of her mouth.

Bridgette's reaction when she sees the can of soda.

Chef gives Bridgette the can of soda.

Bridgette drinks all the soda.

Bridgette doesn't want to hold her breath because she thinks she might die if she does it.

Bridgette gets a present from Izzy.

Bridgette gets a puppy from Izzy.

Bridgette gets scared after Noah tells her about Hiccup Island.

Bridgette pushes Noah on a swing.

Noah plays on his phone while Bridgette is fanning him.

Bridgette starts listing all the bad things that happened to her.

Bridgette's reaction when she hears that Noah is about to beat the Frozen Dragon game.

Bridgette tries to get out of the daycare.

Bridgette and Harold eliminate each other from the paintballon battle challenge.

Bridgette begs Courtney to reveal what's under the sheet.

Bridgette searches for Courtney's couch in the sandbox.

Bridgette wants Beth to blow Courtney's couch out of her nose.

Bridgette stops Owen from eating a hot dog that was inside Beth's nose.

Bridgette tries to get Courtney's couch out of Beth's nose by using a toilet pump.

Courtney wants Bridgette to be her camerawoman.

Bridgette and Courtney high five each other.

Courtney stops Bridgette from high fiveing with Jude and Owen.

Bridgette and Courtney fly off into the sky.

Bridgette uploads the video that she recorded to WeTube.

Bridgette and Courtney celebrate their victory.

Bridgette thinks that when there's fire, people should save their stuffed animals.

Bridgette tells a scary tale to Cody and Izzy.

Bridgette gets scared by Richard Swimmins.

Bridgette starts crying after Harold tells her that Lenny is missing.

Courtney tells Bridgette to hold it together because she's a big girl.

Bridgette asks Chef why does he hate gum so much.

Bridgette and the other kids used the everything horse as a boat..

Bridgette is annoyed by Owen.

Bridgette asks Beth to not smash the Easter egg.

Bridgette lets Beth smash the Easter egg after Beth tells her that it's white chocolate.

Bridgette thinks that her Mother's Day card is pretty good.

Bridgette freaks out after she remembers what happened to some animals at a petting zoo.

Bridgette tells Chef that she has to go to the bathroom.

Bridgette orders a croissant, which she considers to be Italian food.

Bridgette as she eats what she ordered.

Bridgette gets scared by Lenny.

Bridgette tells Owen that it's her fault Lenny became evil since she gave him human food.

Bridgette pushes Hoppy on a swing.
Retrieved from "https://totaldrama.fandom.com/wiki/Bridgette_(Total_DramaRama)?oldid=1609455"
Community content is available under CC-BY-SA unless otherwise noted.