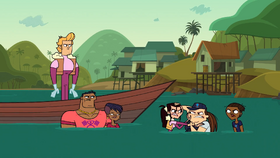 A three-team "Superteam" must catch six catfish; if one has the show's logo, go directly to the Chill Zone
Traverse trap-filled war tunnels until you find a Don Box, with a map to the exit

The six remaining teams head for the Mekong Delta of Vietnam where they form two super-teams of three and fish for catfish. While allies finish the challenge first, rivals instantly make it to the Chill Zone due to one's leadership and another's dumb luck. The remaining three teams become lost in wartime tunnels where two lovestruck partners help the others find a way out. At the last second, kind cool dudes allow the team to overtake them to the finish lines, which results in their own exit.

The teams must now fly to Vietnam and travel to the Mekong River, where they will find their next Travel Tip. The Police Cadets take time to flaunt their victory at the Ice Dancers, further infuriating Josee and reminding them that they won in treachery by eliminating the Goths. Devin, now desperate to win over Carrie, steps up his game. However, his attempts are made difficult by his pepper-induced blindness, causing him to pull Stephanie into a cab by mistake and forcing Carrie to share a cab with Ryan.

After the flight lands, the Sisters and Surfer Dudes are unable to get to a taxi, and instead, take manually driven rickshaws down the river. However, Emma forces Kitty to drive, after feeling the previous driver is too slow. As teams arrive at the challenge area, they find out that they must work in teams of three to form a super team challenge, where they must use their fingers as bait for catfish, in a fishing technique called "noodling". Once teams collect six catfish, they will get their next Travel Tip, but if a team manages to find a Zip It Ticket, they can skip the next challenge and go straight to the Chill Zone. The Ice Dancers and Police Cadets consider temporarily working together for the challenge along with the Daters after Stephanie makes her and Ryan work with them due to feeling jealousy whenever he talks to Carrie. Carrie reveals that she thinks Devin might like her due to his attempts to impress her. Though, after getting advice from Emma, she pushes her feelings aside, which Devin's clumsiness unfortunately helps with.

While MacArthur keeps repelling the Cadet's fish away with her aggressiveness, Ryan helps Stephanie with the challenge, and she is shocked to find out that she still has feelings for him. After noticing the other team cooperating, Sanders tries to motivate her super team to temporarily put aside their hatred and focus on hating the other team more. Finally agreeing to work together, Josee comes up with a plan to sabotage the other team, which MacArthur is fully on board with. Sanders looks on in concern as the two swim away laughing evilly, fearing she created "an axis of evil". Josee and MacArthur swim past Devin and trick him into thinking they see a mega catfish, which would impress Carrie, but it turns out the "mega catfish" is a crocodile. The blind Devin brings it back and the crocodile ends up devouring all the catfish. Luckily for them, Brody has experience with this type of situation and is able to make the crocodile regurgitate the fish via the Heimlich maneuver.

The teams must now compete in another All-In, which involves searching through tunnels filled with traps and dead ends for a Don Box with directions to the Chill Zone. Much to the surprise of the others, Jacques manages to find and catch the branded catfish which leads to the super team making their way straight to the Chill Zone tying for first place. Sanders suggests keeping the alliance intact which the other teams agree to but secretly plan to betray one another. Devin tries to reveal his crush on Carrie but gets interrupted numerous times and almost costs them the race after alerting the other teams when the best friends find the Don Box. The Surfers ultimately let the Best Friends pass them in the race to the Chill Zone due to their alliance and get eliminated after coming in last place. They reveal that while they're bummed out about losing, they're glad that they were able to make friends and play a clean game.

MacArthur taunts the Ice Dancers for getting second place.

The Cadets grab the tip.

Don explains the country of Vietnam to the viewers.

"The last team to arrive here, may be headed home."

The first superteam is formed.

Sanders tells Stephanie she is jealous.

The Sisters reach the river.

Brody happily hugs Emma when he finds out they will be working together.

Carrie asking the Sisters for advice about Devin's behavior.

Josee taunts MacArthur after she scares the catfish off.

Sanders reminds MacArthur they are in a super team.

Stephanie and Ryan have a moment.

The second superteam listen to Emma.

Emma and Carrie catch some catfishes.

Josee and MacArthur smile at each other.

MacArthur and Josee trick Devin into thinking the crocodile is a catfish.

The catfish caught by the superteam.

The three teams decide to keep the super alliance.

The crocodile eats all of the catfish.

The Sisters, Surfer Dudes, and Best Friends finish the challenge...

...much to the annoyance of the other team's.

The "Axis of Evil" after Jacques catches a branded catfish.

The other superteam in the All-In challenge.

The "Axis of Evil" three-way tie at the Chill Zone.

Josee and MacArthur shake hands for their new alliance, but they still hate each other.

The Sisters talk about the Surfers.

Emma falls into a trap.

Devin tries to tell Carrie he loves her.

Brody comforts Emma after rescuing her.

Emma asks if the Surfers busted through a wall.

The Surfers and the Sisters hear the "Superteam call".

Carrie is mad at Devin for calling the other teams.

All the teams get their next tips.

The Best Friends come in fifth.

Devin tries again to tell Carrie what he feels...

...but Ryan spoils their moment.

The Surfers are eliminated.

Brody tries to give a proper goodbye to MacArthur, but to no avail.