Camping is In Tents 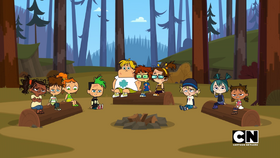 When the teacher takes the class on a camping trip, they divide into four groups. One group, attempting to find the treasure of a local monster, another kid tries to catch Bigfoot, while a third group tries to protect him, and the fourth stays back at the campsite doing camp activities. Meanwhile, one girl wants to use the bathroom, but everything prevents her from doing so.

Izzy is giving Cerberus a manicure and a nail polish.

Chef tells the kids that they're going camping.

Duncan hates camping because he always gets struck by lightning.

The kids don't want to hear stories of Chef when he was young.

Owen mistakes a burger place with the campsite.

Izzy pretends to be a labradoodle.

Beth and Harold are interested to hear facts about Bigfoot and Bigbutt.

Courtney tells Chef that she needs to use the little girl's room.

Chef refuses to stop the bus.

"Look Chef, this is happening whether i'm in a bathroom or not!"
- Courtney

Chef takes a shortcut to the campsite.

Thanks to the shortcut, the bus got destroyed.

Courtney goes to the outhouse.

Courtney decides not to go to the outhouse because she thinks it's too scary.

The kids want to know what happens if Bigfoot sees them.

The kids go explore the forest.

Owen accidentally falls down the cliff.

The kids find a diary.

The kids read the diary and find out that a man got attacked by Bigfoot.

The kids find a map that leads to Bigfoot's treasure.

Harold decides to set traps so that he can catch Bigfoot.

Beth and Duncan tell Chef that they're looking for Bigfoot's treasure.

Chef tells the kids to follow him back to the campsite.

Cody wants to know if Bigfoot is real or not.

Harold wants the kids to help him with the traps.

Courtney tries to convince the kids to go to the outhouse with her, but fails.

One of Courtney prehistoric cave sisters tries to pee..

.. but then she gets attacked by a dinosaur.

Harold finishes setting up the traps.

Jude asks Harold what happens if he catches Bigfoot.

Gwen asks the kids if they're ready for a scary story.

Gwen says that her story will be all true.

Cody accidentally steps on one of Harold's traps.

Cody gets attacked by birds.

Bigfoot as he watches the kids.

Courtney hears a noise and think that it's Bigfoot.

Izzy imagines herself making a TV commercial for her restaurant.

The kids and Chef get lost in the woods.

It begins to rain which makes Courtney scream.

Izzy and Jude decide to climb up a tree.

Chef runs into a cave with the kids.

Beth and Duncan tell Chef that the map and the treasure are real.

According to the map, the treasure is deep inside the cave.

Chef tells the kids to watch their steps.

Chef notices that the lava is full with lavagators.

Owen falls into the lava, but survives.

Chef and the kids find a locked door.

Chef opens up the locked door.

Jude and Izzy find Bigfoot, and Izzy starts talking with him.

Beth opens up the last door.

Chef and the kids' reaction to finding..

Chef and the kids run out of the cave.

Owen is happy that they didn't die.

Harold thinks that he catched Bigfoot after he hears someone walking into his traps.

The kids find out that it was Chef who walked into Harold's traps.

Beth, Duncan and Owen want to sell Bigfoot's treasure and split the cash.

Courtney tells herself to stop being silly and slaps herself.

Courtney sees Bigbutt in the outhouse.

Courtney gets scared by Bigbutt.

Bigfoot takes Jude and Izzy back to the campsite.

Bigfoot gets his treasure back from Chef.

The kids get scared by Bigfoot.

Chef and the kids run back into the bus and leave the campsite.

Chef and the kids are finally back at the daycare.

Courtney begins to scream after she finds out that she can't use the daycare's bathroom.

Retrieved from "https://totaldrama.fandom.com/wiki/Camping_is_In_Tents?oldid=1595864"
Community content is available under CC-BY-SA unless otherwise noted.