Norbert "Chef" Hatchet is a teacher working at the daycare center.

Chef's personality is mostly the same as he was on Total Drama, though he's nicer to the kids, shows a degree of patience with dealing with them, and cares about their well-being. Although he still has a temper should he be provoked enough, he enjoys playing with the toys and by extension, working in the daycare. 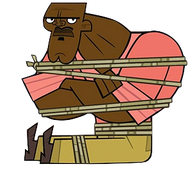 Chef being tied in ropes. 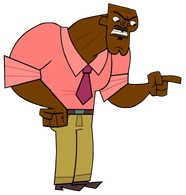 Chef talking to someone. 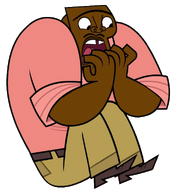 Chef looking at something. 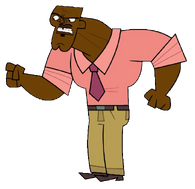 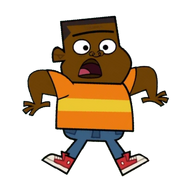 Chef as a kid, as seen in Hic Hic Hooray.

An outside view of Chef's house.

Chef finds Owen's Uber ball after the noise it created.

Chef tries to make a list of Noah's attributes and flaws.

Chef preparing a cup of his favorite drink.

Chefs is not able to find his juice.

Chef is reunited with his drink.

Chef gets angry at the children.

Chef cries over Candice breaking up with him.

Chef has a new secret admirer.

Chef after he read a lot of love letters.

Chef asks "La Fonda" if he can kiss her.

Chef gives all of the kids a time out.

The kids tell Chef that something is once again wrong with Richard.

Chef puts a new fish into a bowl.

Chef pulls the cake away from the kids..

Chef tells the kids to freak out.

Chef plays with toys while the kids are outside.

Chef brought in scorpions to the kids.

The kids throw giggle-doh at Chef.

Chef thinks he should look super tough and cuddly at the same time in the photo.

Chef posing for the Child Educators Calendar of the year.

Chef tells the kids that it's time for them to leave.

Both Chef and a lady from a movie get scared and start screaming.

Chef tells Izzy to go do whatever she wants.

Chef orders the kids to get out of his office.

Chef says that it's been raining for 4 days straight.

Chef tells the kids that if they are quiet for the next hour he'll get them ice cream.

Chef playing on a guitar.

Chef declares Gwen the winner of the quiet game.

Chef says that while the kids were playing he build his dream boat.

Chef wants Harold to carry the pudding cups like a normal kid would.

Chef cleans up the daycare.

Chef blocks the door so that Bridgette can drink the soda.

Chef talks about how him and his brother..

Chef tries to scare Bridgette with a Jack in the box but fails.

Chef tells Bananas & Cheese that he doesn't like their music but he's happy that they're here.

Chef's reaction when he hears that Noah is about to beat the Frozen Dragon game.

Chef wants to help out the kids.

Chef tries to get Courtney's couch out of Beth's nose.

Chef gets his watch back.

Chef's reaction when Courtney tells him that tomatoes are actually fruits.

Chef takes a test in his office.

A scientist tells Chef that cucumbers are fruits.

Chef feels like his entire world view is messed up.

"I guess the world just isn't ready for the truth about fruits and vegetables."
- Chef

"Who hasn't pooped in a sandbox, right?"
- Chef

Chef opens an empty can of pretzels.

Chef tells Courtney that he accidentally liked her video.

Chef tells the boys that their newest video got 6 million likes.

Chef gets Duncan out of the slide.

Chef starts panicking with the kids.

Chef gets his fingers broken.

Chef asks the kids what is his number 1 rule.

Chef walks over to DJ, Trent and Katie.

Chef tells Paul that his timeout isn't over yet.

Chef finds an old gum under the table.

Chef gets angry at Owen.

Chef fights with an alien.

An alien takes over Chef's body.

Chef shows a wooden sword to the kids.

Chef surprises the kids by buying them an everything horse.

Chef wonders where Harold is.

Chef begins to tell the kids a story.

Chef gets attacked by Lenny.

Chef doesn't know what happened to him.

Beth tells Chef that Hoppy won't ever hit anyone ever again.

Chef thinks he handled the situation between Beth and Duncan well.

Chef tells the kids that he set the thermostat to "sleepify".

Chef tells Hoppy that he's locking him up.

Chef repeatedly hits himself with a giant carrot.

Chef dresses up as Hoppy.

Chef scares the kids with his glare.

Chef is dissapointed that the kids gave him white chocolate.

Chef realises that he put cucumber slices on his eyes, which is something he's allergic to.

Chef tells Cody that every mother has a parrot named Steven.

Chef's mother punishes him for forgetting about Mother's Day.

One of Chef's previous jobs.

Chef starts washing dishes so that he can pay a restaurant's bill.

Chef runs as much as he can so that there can be light.

Chef, Beth, Duncan and Owen find a map that leads to Bigfoot's treasure.

Chef opens up a locked door.

Chef gets hypnotised into being a chicken.

Chef asks Owen why is deadly stuff falling from the ceiling.

Chef pretends to be the Hot Diggity Dog mascot.

Chef ruined Halloween for the kids one time.

Chef is ready to save Hot Dog day.

Chef loves the gnomes he bought.

Chef tells the kids that thanks to daylight savings time, the day will be one hour shorter.

Chef was the tri-state fly-swatting champion of 1991.

Chef after he kills a fly.

A younger version of Chef on a date.

Chef tells a skunk to come and get him.

Chef wants to teach the kids how to toss pizza dough.

Chef wakes up in his room.

Chef gets informed by the military that he got replaced with a robot.

Chef tells his mother that he was at the fun park.

Chef shows his weapons he stored in case of a zombie apocalypse.

Chef tries not to panic.

Josh asks Chef where are the pizzas.

Chef is proud of Owen.

Chef tries to save Cody.

Chef tries to make the kids move their bodies.

Chef wonders why are the kids hooked on their tablets.