The Stepbrothers with Lorenzo

Darren Frost
Chet was a Total Drama Presents: The Ridonculous Race contestant as a member of The Stepbrothers with Lorenzo.

Chet is average in every aspect. He has a hair-trigger temper and a tendency to whine and complain about everything. His biggest rival was his stepbrother Lorenzo, whom he became forced to live with after the marriage of their parents one year ago. So their parents decide to sign the two up for the race as a last-ditch effort to bring cooperation between the two and to get them to stop hating one another. Chet's normally quite lazy, but if there's an opportunity to show up Lorenzo, he suddenly becomes very motivated. Chet shows that he is skillful when it comes to gymnastics. As the race goes on, he and Lorenzo realize they have a lot in common and finally settle their differences, become good friends and accept each other as stepbrothers and family.

Chet and Lorenzo had been enemies for a very long time and only a year ago that they had become stepbrothers after Chet's mother married Lorenzo's father. This, however, did not end the feud and they continue to fight every time they get into eye-contact of one another. Not pleased with the idea that they are now a family, Chet and Lorenzo apparently begged their parents several times to get a divorce. In order to settle this sibling rivalry once and for all, their parents made them participate the Ridonculous Race.

From the moment they are introduced in None Down, Eighteen to Go - Part 1, Chet and Lorenzo spend most of their time insulting each other or engage into a brawl. The two of them quarrel in almost everything such as blaming each other for falling behind in a challenge or who should take the challenge first. Despite their rivalry, they were almost place in the middle in every leg of the Race and even at one point being ahead of all the other teams despite them being on the second flight.

In Hello and Dubai, he distracts Carrie and gets hit with a tennis ball, causing his team to wait in line until it's their turn again. He claims Lorenzo's anger about this is him being jealous that he "talked to a girl".

It wasn't until Shawshank Ridonc-tion that the two finally found some common ground and become friends, fulfilling their parents goal. While figuring out a way to escape prison, the two of them realizes that they thought of the exact same plan. Upon further investigation, they also found out that they had the same interests. No longer arguing, the two of them work together to escape from their cell and accidentally found a tunnel underneath their bunk bed. This makes them the first team to complete the challenge and reach the Don Box. Though the no longer argue, they are easily distracted with their "spaceship" raft and were overtaken by the Best Friends. Nevertheless, the Stepbrothers reach the Chill Zone second, marking the first time they finish in top 3.

Now bonded, the Stepbrothers decides to put tattoos of each other on their chest, however Chet believes they were going to tattoo their own faces. For the challenge in Down and Outback, the two of them mistaken a kangaroo for the rare albino rabbit and spend too much time trying to catch it, pushing them to last place. They finally caught the albino though they mistaken it for another animal. On the way to New Zealand, their plane crashes after it was attacked by the same kangaroo. An avalanche caused by Spud causes the Stepbrother to finish in the Chill Zone along with the Rockers. Don reviews the video and declares both the Stepbrothers and Rockers are eliminated in the first double elimination round. Though they complain that their elimination is unfair, the two didn't really mind as they now come to love each other as family. As the two teams leave, the Stepbrothers invite the Rockers to play video games at their house.

Chet and Lorenzo appear in A Million Ways to Lose a Million Dollars, where they decide to cheer on the Cadets due to their skills. They brag that they too had martial art skills, but accidentally destroy the camera in the interview room while displaying it. After the winner is declared, Chet is seen along with the rest of the contestants in the final group shot.

Chet looking at something. 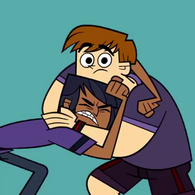 Chet and Lorenzo argue in their first interview.

The Stepbrothers are crushed by the Twins.

Chet and Lorenzo complain about each other in the interview.

Chet and Lorenzo fight instead of building a sand castle.

Chet and Lorenzo get in another fight after failing with the sentence.

The Stepbrothers almost high five when they completed their challenge.

Chet tries to show off by breaking a coconut to find the tip...

...but gets hit in the head from trying so.

The Stepbrothers find their tip.

The Stepbrothers ready to jump, even thought they are glued to each other.

Chet and Lorenzo reach for the Don Box.

The Stepbrothers are frighten by the Grave Digger.

Chet is carried by Lorenzo over the hot coals in Hawaii.

The Stepbrothers' selfie with an angry rhino chasing them.

The Stepbrothers sing their theme song.

The Stepbrothers drew their faces on their chests.

The Stepbrothers find a kangaroo, believing it to be the albino.

The Stepbrothers are kicked by the kangaroo.

The Stepbrothers leave the show, along with the Rockers.

The Stepbrothers root for The Police Cadets in the finale.

Retrieved from "https://totaldrama.fandom.com/wiki/Chet?oldid=1610312"
Community content is available under CC-BY-SA unless otherwise noted.