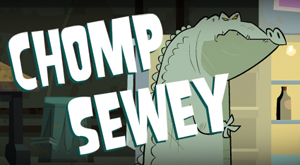 Chomp Sewey is a Total Drama World Tour game produced by Cartoon Network. The game was released on July 19, 2010 on both Cartoon Network's website and the iOS App Store, but has since been removed from the latter.

You play as the giant sewer alligator from Broadway, Baby!, attempting to eat eight contestants: Lindsay, Tyler, Courtney, Izzy, Alejandro, Noah, Heather, and DJ, in that order. You press up to jump into the air and down to go underwater and speed up. To chomp the contestants, you press the space bar once you are directly behind the boat. You may also chomp fish and rats for extra points and to gain brief bursts of speed. Stay away from electric eels straight at the waterline, bats in the air, piles of tires at the bottom, and full garbage cans dropping from chutes above you, as they will all slow you down. You can collect a green and black helmet power-up to make you impervious to all these obstacles, and a red and black rocket-helmet power-up that will not only protect you but will also speed you up significantly as well. As you eat more contestants, the boat speeds up to make it harder for you to catch the others.

There is also a cheat code that can be activated by pressing the shift key and clicking the refrigerator at the same time, then typing in "hungry". You will receive a helmet which makes you invincible.

The eight contestants that you must eat in the game. 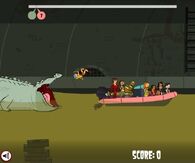 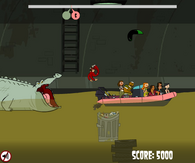 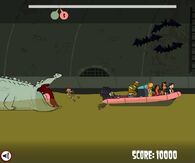 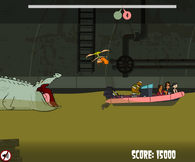 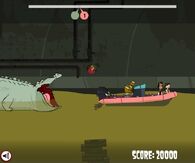 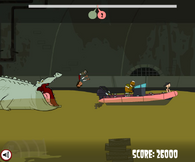 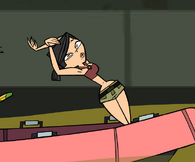 Heather falls off the raft. 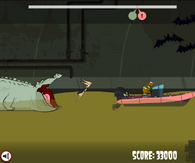 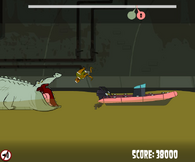 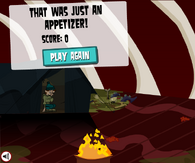 Only Ezekiel in the alligator's stomach. 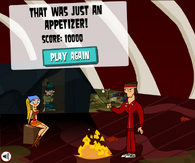 Lindsay, Tyler and Ezekiel in the alligator's stomach. 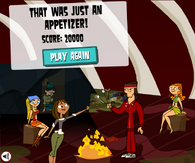 Lindsay, Tyler, Courtney, Izzy and Ezekiel in the alligator's stomach. 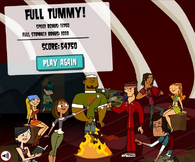 All of the contestants in the alligator's stomach.

Retrieved from "https://totaldrama.fandom.com/wiki/Chomp_Sewey?oldid=1575508"
Community content is available under CC-BY-SA unless otherwise noted.