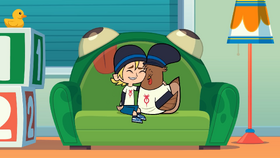 One of the children befriends a chicken with a bad attitude from a petting zoo, which follows them back to school. The kid protects his new friend from the other children until he can defend it no longer. Meanwhile, another kid begins to feel ill after sucking his dirty thumb without washing it first, until his condition worsens to the point where he is more beast than boy.

The petting zoo pays a visit to the daycare, with MacArthur being the zookeeper in charge. She allows the kids to play with the various animals she brought, but warns them about the chicken. The kids have the time of their lives with the animals; Beth entering an alligator's mouth, Harold being cocooned by spiders, Cody petting a wolverine, and Owen and Izzy with a pig. Jude, however manages to make friends with the chicken, as it sees him as a giant chicken. Chef then announces that it's lunchtime and MacArthur orders the animals to return to the truck. Jude bids the chicken farewell, but the chicken is saddened that its new friend will be leaving. Chef orders the kids to wash their hands and scolds Cody for sucking his thumb after petting the wolverine. The result of sucking his dirty thumb turns him feral, though Chef doesn't seem concerned about it.

While the kids eat their lunch, Jude discovers the chicken has stowed away in his lunch. Afraid that Chef might find out, Jude gives the chicken his clothes while he wears his spare. Never having had a pet of his own, Jude decides to keep the chicken and names it Nugget. For the rest of the day, he and Nugget spend their time together. The two of them also play tricks on Chef, as every time Chef sees Nugget in Jude's clothing, Jude will switch with Nugget and appear in its place. After several times of this happening, Chef believes this is a sign that he is afraid of commitment. Choosing not to be afraid anymore, Chef calls a person named Beverly and declares he is going to buy a tuba that he always wanted. Meanwhile, Cody doesn't feel well and suddenly coughs out a hairball much to his confusion. Izzy takes the hairball and explains to Cody that he is turning into a werewolf. Cody attempts to brush it off, but suddenly begins to act like a dog by scratching with his legs while on all fours.

Nugget's presence begin to cause havoc in class: it steals Courtney's lunch before squirting juice at her, destroying Harold's block city, and attacking Harold, Izzy, and Owen. The children complain to Jude about how naughty his chicken is, but Jude defends Nugget, explaining that it is not a bad chicken but simply misunderstood. It is not until Nugget attacks Bridgette for no reason with a pair of nunchucks before shooting eggs at her (with Jude himself caught in the crossfire), that Jude realizes that his friends are right about his chicken. While all this is happening, Cody's condition becomes worse, with fur growing all over his body while he is asleep. Just as Izzy had warned him, Cody is indeed turning into a werewolf.

Jude decides to take responsibility for Nugget's actions and sets his friend free on the roof. However as chickens can't fly, Nugget only lands on a lower section of the roof. Terrified, Nugget jumps into Jude's arms, but Jude believes that Nugget is reluctant to leave him and throws it off the roof again. Because his eyes were closed, Jude believes that Nugget had already flown away, but in reality, it fell to the ground. Owen attempts to tell him what really happened, but Harold silences him. As the boys are about to leave the roof, Nugget bounces on a car and reaches the roof again. Seeing Jude's actions as a sense of betrayal, Nugget attempts to attack its former friend. However, a fully-turned werewolf Cody shows up and mauls the aggressive chicken off-screen. Back in class, Jude admits that his experience with Nugget has taught him a valuable lesson: egg salad gives him gas. Courtney corrects him that the true lesson is not to bring a dangerous animal into a daycare. At the other end of the room, Beth overhears this and quickly tells the alligator from the petting zoo to jump out of the room. The alligator (named Suzanne) does so, but ends up in Chef's office where it attacks him, breaking his tuba off-screen just as the episode ends.

Harold performs a magic trick with pulling several of the kids out of a hat. First comes out Izzy, then comes Bridgette, and last as he struggles hard, comes out Owen, who was eating, as Harold storms off.

MacArthur teaches the kids how to "milk" a bear.

"Then you're doing it wrong!"
- MacArthur

MacArthur warns the kids about the chicken.

Beth plays with an aligator..

.. and pulls a shoe out of her mouth.

Harold playing with the spiders.

Beth climbs into the aligator's mouth..

..before MacArthur pulls her out.

The chicken and Jude become friends.

Izzy plays with a pig.

The kids say goodbye to MacArthur.

Courtney gets disgusted by Noah..

.. and Noah gets disgusted by Owen.

Jude finds out the chicken followed him back to the daycare.

The chicken trying out different disguises.

Jude gives his own clothes to the chicken..

Nugget in the daycare.

Cody burps out some hair.

Cody gets worried about what Izzy said.

Courtney tells Jude that his chicken is bad.

Courtney gets angry at Jude.

Cody turns into a werewolf.

..but gets beaten up.

Izzy and Owen after Nugget beats them up.

Izzy tells Jude that his chicken is mean.

Jude and Bridgette after Nugget shoots eggs at them.

..but Cody comes in and saves him from the chicken.

Courtney tells Jude that he can't keep a wild animal in a daycare.

Jude isn't the only one keeping a dangerous animal in class.

Retrieved from "https://totaldrama.fandom.com/wiki/Cluckwork_Orange?oldid=1589516"
Community content is available under CC-BY-SA unless otherwise noted.