Come Fly with Us 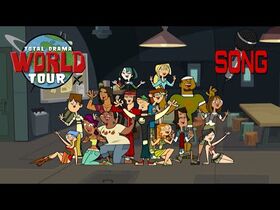 "Walk Like An Egyptian - Part 1"
"Come Fly with Us" is the first song featured in Total Drama World Tour. It is sung by all of the seventeen contestants — except Owen, who has a speaking line and is knocked out by Chris — throughout various locations inside the Total Drama Jumbo Jet, in "Walk Like An Egyptian - Part 1." It is sung to describe how the contestants feel about flying in the sky and singing for the new season.

It's a pleasure and an honor and a must.

"Dudes, this is messed, you're singing in a plane."

What did you expect? Chris is freaking insane!

Haven't you always wanted to?

It can't just be me!

They thought they could leave me and depart...

...But this stowaway's got winning in his heart!

Come fly with us! Come die with us!

Chris hits Owen with a frying pan to keep him quiet.

Come sing with us!

"Anyone care for a copy of the season three rules? Because in order to escape instant elimination—"

All contestants must sing in each show!

Retrieved from "https://totaldrama.fandom.com/wiki/Come_Fly_with_Us?oldid=1695197"
Community content is available under CC-BY-SA unless otherwise noted.