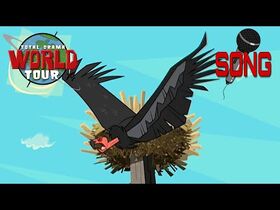 "Rapa Phooey!"
"Condor" is the twenty-fifth song featured in Total Drama World Tour. It is sung in "Rapa Phooey!" Alejandro, Cody, Sierra and Heather sing this song while they are each returning their colored condor eggs to the mother condor's nest. They also sing because Chris suggests it keeps the Condor calm but he may have been lying.

Alejandro: I'm tall, I'm tanned,
I'm young, I'm handsome.
I've come here to bring back your wee ones...
So, hush my sweet, condor.
Let me win this one, please.
So try, attack me!
But, I won protection.
I don't feel that pecking.
So, save your objections.
Hush, now, condor,
Let me in the final three.
Whoah! Oof! Aw, no! Ah!
Chris: Next!
Cody: I, oh, I-I-I...
I've got problems with condors...
Problems with condors.
Why, oh, why-y-y?
Am I not at home? I ponder...
Trust me, oh, trust me-e!
I'm your best friend,
And I'll never eat eggs agai-i-in!
My licorice! Oof!
Chris: Good news! You can have another chance later! But first...
Sierra: I'm a mom now, so don't be giving me flak!
Cause my first chick just hatched, out of his yolk sa-ack!
So, hush, my sweet!
Let me into the final three!
Cody Jr.! No, not Auntie Heather!
Chris: Heather?
Heather: I...
Sierra: Waaaaah!
Heather: How I-I-I...
Sierra: Oof!
Heather: How I really hate these birdies,
And I wanna live to see my thirties.
These, these feathered jerks.
They're bringing me strife,
And "Cody II,"
I'm not your wife,
For the last time!
Get a life!
Yes!
Thanks, my sweet condor,
Now I'm in the final three!

I've come here to bring back your wee ones. So, hush my sweet...Condor!

So try, attack me.

But I won protection!

Let me in the final three.

I've got problems with condors!

Cause my first chick just hatched, out of his yolk sack!

Let me into the final three!

These, these feathered jerks.

They're bringing me strife,

For the last time!

Thanks, my sweet condor, now I'm in the final three!