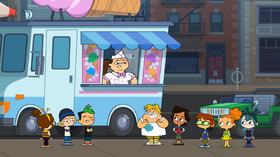 The fun kid is craving for ice cream and works hard to earn enough money to buy one. However, he was ripped off at the last minute. Feeling sorry for him, his friend rallies the other kids to unite to right that wrong.

At the top of the treehouse, Owen happily announces that "Today's the day" while holding his piggybank and slides down to ground level. When asked why he's so excited, Owen announces that today is the day he will be buying chocolate ice cream from the ice-cream truck, as he has saved enough money for this occasion. Right on cue, the ice-cream truck arrives at the daycare, driven by MacArthur. Owen's excitement however leads him to accidentally throwing his piggybank where it lands and breaks on a drain grate, spilling all of Owen's money into the sewer. Without any money, MacArthur will not sell any ice-cream to him. Disappointed that he will not be able to eat any ice-cream, Owen begins to lose his mind (again) and almost eats the garbage until Noah stops him. As MacArthur will not leave until 2 pm, Noah suggests Owen try to earn two dollars before she leaves.

Owen decides to set up a business in which he will do anything for a dollar. Harold is his first customer who asks Owen to take care of his pet, Henry, a mutated bologna sandwich he forgot to eat that somehow comes to life. Owen tries to take care of it, but the sandwich chases him around until Owen beats it to death, forcing Harold to take back his money. Owen then moves onto Duncan, who tasks him to call Chef while he is watching a horror movie. Right as the killer of the movie appears, Chef receives the call and runs out of the building in fear. With his task complete, Duncan pays Owen a dollar. Owen is then tasked by Gwen to clean her drawer, located at the dark corner of the room. She pays him fifty cents first and will pay him the other fifty if he completes the task. Despite getting frightened, Owen manages to clear the drawer of bats, a snake, and a scorpion. Upon completion, Gwen pays him the rest of the money as promised.

Having earned enough money, Owen runs to the truck and orders a chocolate ice-cream. However before he receives it, MacArthur realizes its two o'clock and leaves the daycare. This causes Owen's fragile mind to break. Sympathizing with his friend, Noah rallies the other kids to catch up to the truck and get Owen his ice-cream. Harold points out that they will never catch up to her as MacArthur has a huge head start. Claiming that she can change traffic patterns with her mind, Izzy concentrates her thoughts until the sound of a traffic accident is heard. Though the other kids thinks that this is a coincidence, MacArthur is indeed stuck in a traffic jam due to several cars crashing into each order. With the truck now slowed down, the kids get into their cars and drive into town.

MacArthur realizes the kids are chasing her and drives through the pile of cars and attempts to escape them by driving through an alley, almost knocking a mother and her child along the way. Despite this, the kids manage to catch up, only for MacArthur to quickly drive away. Using a shortcut recommended by Izzy, the kids drives through the sewer and end up ahead of MacArthur. Harold then suggests putting up a road block to slow the truck using his toy cars, but MacArthur easily crushes it. Just as Owen is about to give up, MacArthur encounters the blue cat on a skateboard that the kids saw at the beginning of the episode. When MacArthur tries to get rid of it by honking it, the cat scratches one of her tires, stranding her, and allowing the kids to catch up.

MacArthur finally concedes defeats and sells Owen the ice cream he ordered earlier. Noah congratulates Owen, but when he pats Owen on the back, the ice-cream falls off the cone. Not dismayed by this, Owen licks the ice-cream off the ground, to the disgust of his friends as the episode ends.

While Chef is working in his office, Jude enters, running away from a pack of chickens in his underwear. He manages to escape from them by hiding behind Chef's desks only to be chased again after he comes out.

Owen announces that today's the day he has been waiting for.

Jude asks Owen why is he so happy.

Owen tells him that it's because today's his favorite season.

An angry cat looks at the kids.

"That was the fourth weirdest thing that I have ever seen!"
- Beth

An ice cream truck appears right in front of the kids.

Owen accidentally drops his money into the sewer.

A rat tells his kids they're out of money and have nothing to eat..

.. until Owen's money falls down right in front of them.

Owen about to lick a cactus that looks like an ice cream.

Noah asks MacArthur how long she's staying at the daycare with them.

MacArthur tells Owen that if he gets 2 bucks by 2 PM she will sell him an ice cream.

Owen asks his plushies for money.

Noah tells Owen that if he wants to get money he needs to start his own business.

Owen talks about how he never had a business before.

Owen starts his own business.

Harold wants Owen to take care of his pet sandwitch.

Duncan wants Owen to call Chef on the phone.

A lady being alone in the horror movie Chef is watching.

The killer appears behind the lady.

Both Chef and the lady from the movie get scared and start screaming.

Duncan gives Owen a coin for his action.

Gwen wants Owen to do something for her.

Gwen tells Owen to clean up her cubby and she'll give him more money.

Owen asks gwen how does her cubby look like.

MacArthur about to give Owen his ice cream..

.. but the clock hit 2 PM and she decided to go to the park without giving Owen his ice cream.

Owen imagines himself being on a desert.

The kids watch Owen saying the word "fine" over and over.

Noah tells the the kids that they need find the ice cream truck..

.. because ice cream is everything to Owen and he wants to help him out.

The kids decide to help out Owen and Noah.

Izzy uses her mind to change the traffic patterns.

MacArthur gets into a traffic.

MacArthur gets out of the traffic.

MacArthur tries to lose the kids.

MacArthur when she sees a mother and her baby right in front of her.

A mother and her baby start screaming when they see MacArthur.

The mother hits MacArthur with a toy.

Noah asks MacArthur to hand over the ice cream to them.

The kids go into the sewer.

An aligator tries to eat the kids.

The kids get out of the sewer and are now ahead of MacArthur.

...which is revealed to be just toys.

.. and asks her to give him ice cream.

Owen thanks Noah for helping him out.

Noah pushes Owen and accidentally makes the chocolate from his ice cream fall off the cone..

The kids get disgusted by Owen.

Retrieved from "https://totaldrama.fandom.com/wiki/Cone_in_60_Seconds?oldid=1589524"
Community content is available under CC-BY-SA unless otherwise noted.