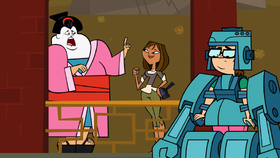 A banquet made by the losing team

Harold
A kung fu challenge comes to the set as the boys battle against the girls. One castmate is not allowed to compete and must sabotage the teams instead for extra drama, but fails. Another castmate desperately tries to form an alliance with someone else, while two others start to mend their conflict. However, the saboteur ruins the new friendship and the unlikely winner earns himself a feast.

The episode opens with Beth complaining about how exhausting the previous challenge was in the girls' trailer.

Before Beth goes to sleep, Courtney asks her if she wants to watch a romantic comedy on her personal digital assistant or eat cheese puffs. Beth says that it's tempting, but then says that she's never going to form an alliance with Courtney, and irritably tells her to try and find another "sucker."

The camera then goes to the boys' trailer, where Harold is telling his "blankie" to stop tickling him. Harold then wakes up and realizes that he's covered with snails, much to Duncan's amusement. Harold then asks Duncan when he's going to stop making his life so miserable, to which Duncan replies, "When it stops being funny."

Afterwards, Harold frees all the snails, except one, which he says sounds and looks like Leshawna.

Harold names the snail "Leshawna Jr." and places it in a matchbox next to him and says that he is too excited to go to sleep, though he ends up going to sleep right after.

The following morning, the cast awakens to a loud gong. Unfamiliar with the location, Owen asks where they are, to which Duncan responds that they are back at Camp Wawanakwa. Chris then comes in, "flying" in the lotus position, and doing some kung fu moves. He announces that this episode will be a reward challenge and that today, he'll pit the boys against the girls. Courtney complains that there are three boys and only two girls, to which Chris replies that Owen won't compete in the challenge, since he "snuck off set to go skateboarding." Owen then momentarily forgets that he is in a secret alliance with Chris, but then says that he flagged a taxi, and went to the local skate park. Owen then attempts to do a 720 degree trick, but breaks the board in half. He later changes his mind, and says he went to get some food at a local food court, which the other castmates believe.

Chris then says that in each kung fu movie, the fighters train with choreographers, so for today's challenge, each team will have a "fighter" and a "trainer." After Harold goes through a variety of fighting styles, Duncan lets him be the fighter.

The scene changes to Duncan, making Harold wax the Lame-o-sine. Chris then comes by to see how they're doing, and asks Duncan if he can make Harold wax his car too. Duncan asks Chris which his car is. Chris then says "all of them," and the camera zooms out to reveal a parking lot full of Chris' cars, as Chris and Duncan laugh together. Meanwhile, Courtney is training with Beth, who has to wax Chef's chest hair. The two teams also do push-ups. Duncan stands on top of Harold as he does his, so to outdo Duncan's training, Courtney puts a rock on Beth's back, and then stands over the rock. Duncan then retrieves a moose off-screen and puts it on top of Harold, in order to one-up Courtney. Courtney is then seen training balance skills with Beth, while Duncan serves Harold "lunch." Harold then takes the lid off his lunch, to reveal a swarm of bees, which proceed to attack him.

While Beth is seen training with a punching bag made out of hay, Harold is training with a punching bag with Duncan's face on it. After Harold punches the punching bag weakly, Duncan tries to motivate him, saying that he kissed Leshawna. Harold is so enraged to the point that he punches a hole through the punching bag and starts choking Duncan. Both teams are seen standing next to a kung fu temple, where Chef proceeds to reveal two fighting robots. Chris explains that the fighters go inside the robot suits, while the trainers operate them with two joysticks. After two minutes of learning how to control the robots, Chris appears, saying that the fight will begin once the "beautiful geisha," who is in fact Owen in a geisha suit, sounds the gong. Harold attempts to lecture Chris in Japanese and Chinese culture, but Duncan makes Harold kick himself to get him to be quiet.

Owen finally hits the gong and the match begins. Harold, at first, gains the upper hand over Beth, but Courtney makes Beth hit Harold in the face. It turns into a fight between Duncan and Courtney using Beth and Harold, as they begin to make the two hit each other with force. Duncan then presses the joystick with such force that it makes Harold propel towards Beth. Courtney attempts to respond to the attack, but her joystick breaks. Harold then knocks Beth out of her robot suit, winning the challenge. Chris then calls the medics to tend to Beth.

After the break, Chris announces Duncan and Harold as the winners, much to Courtney's displeasure. Harold asks to be unstrapped, and Chef uses his sword to free Harold.

Chris then announces the second "exciting" part of the challenge, which Courtney and Beth are freed of. Chris then says that Duncan and Harold must carry a cup of water to the Mount Banshee, which is actually the cliff. They must retrieve a bonsai tree, which is guarded by a "kung fu master," who is actually Sasquatchanakwa. The first one to bring the bonsai tree down the mountain wins the challenge, and the day's reward. Chris then says that since the girls are not in the challenge, they'll have to be on kitchen duty.

The scene skips to the boys and Owen, in front of the Cliff. Harold asks Owen if he can take care of Leshawna Jr., to which he agrees. As both Duncan and Harold begin to climb the mountain, Owen is hoisted up by a rope. Meanwhile, Beth and Courtney are arguing in the kitchen. Chef then comes in to tell them they'll be preparing a "warrior's meal," which is kung fu noodle soup, using noodles, and the seven most dangerous fishes known to man. Owen tries to convince Duncan to prank Harold, but he refuses to. Owen then goes to Harold, and tells him that Duncan can barely hold his cup of water, and that he could knock it out with a left hook. Harold refuses, saying that the mountain, the water, he, and Duncan are all the same. Harold almost drops his cup of water, but Duncan prevents that from happening. Harold then says that if he and Duncan work together, they can split the prize, to which Duncan agrees. Owen is then hoisted up the mountain by Chris, who says that if he doesn't stop the "lovefest," he'll be sent home, without the money he was promised. During this, Beth and Courtney attempt to cook the fish, only to fail. Beth then says that she's allergic to live fish, but Courtney says she's seen her eat fish before, to which Beth tries to justify by saying she's only allergic to them when they're alive.

Courtney then says that she can work on it alone, when she is suddenly grabbed by a tentacle.

The scene cuts to Owen, who is wondering how he can break up Harold and Duncan's "dynamic duo." Suddenly, he pulls out Leshawna Jr. and asks Harold if he heard what Leshawna Jr. just "said." Owen says that it sounded like Leshawna Jr. wanted Harold to beat Duncan to a pulp. Harold says that Leshawna Jr. taught him to be better, so he won't do it. Courtney is then seen being attacked by jellyfish, while Beth wonders if she could call Brady on Courtney's PDA, not paying any attention to Courtney's dire situation.

The scene changes back to the boys, who are almost to the top of the mountain. As they climb up, Owen asks Harold what he misses the most about Leshawna. Harold responds that she misses her delicate beauty, to which Duncan says that she is as delicate as a freight train. This angers Harold so much that he tosses the water into Duncan's face, and knocks him out with a punch to the face. Harold makes it to the top of the mountain, where he dumps the water to the floor, and then kicks Sasquatchanakwa twice in the face. Harold retrieves the bonsai tree and starts going down the hill, as Sasquatchanakwa attacks Owen.

Later at dinner, Harold is seen enjoying his noodle soup, as Owen pours some more into his bowl. Owen then poisons himself by drinking the soup, as Courtney offers Beth some more tea, referring to her as "best friend." Beth then asks Courtney if she ever thought of making a girls' alliance, to which Courtney responds that it is a great idea. The two girls then make their alliance. Harold then thanks Leshawna Jr. for helping him win the challenge. At Leshawna Jr.'s "request," Harold releases it back into the wild and starts crying as "she" leaves. Chris then ends the episode by asking the viewers if next time they'll come up with something more exciting.

Courtney offers Beth food in order to convince her into joining her alliance.

Harold is the victim to yet another one of Duncan's pranks.

Harold compares the snail and Leshawna in the confessional.

The final five are brought back to Camp Wawanakwa for their next challenge.

The cast mates are shocked when Chris tricks them into believing that he is levitating.

Courtney protests due to the girls being outnumbered two to three.

Owen attempts to show a trick with the skateboard...

Duncan's training exercise does not go as he planned.

Duncan teaches Harold how to punch.

An angered Harold punches a hole right through the punching-bag...

...and reaches through the other side to choke Duncan.

Beth's ninja training is a success.

Harold thanks Owen for giving them information.

Owen hits the gong to signal the start of the battle.

Owen has trouble being a spy, as Chris lectures him for helping both teams.

Beth kicking Harold in the challenge.

Beth braces for the impact of Harold's attack.

Courtney and Beth work on their task to cook the soup for the boys.

Harold and Duncan cover their private parts after Chris introduces the challenge.

Duncan helps Harold to his surprise.

Duncan and Harold decide to work together in the second challenge.

Chris tells Owen to break the bonds between Harold and Duncan.

Owen asks Harold what it is he loves about Leshawna.