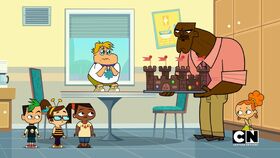 The crazy girl brought a uniquely designed cake with four large corners to school. Three of the kids conspire to have one of the corners for themselves by making friends with her, but are they prepared for what she has in store for them?

The episode opens with Owen eating a bowl of macaroni, which is so hard that there are tremors whenever he chews. Duncan and Leshawna scold Owen for eating the macaroni that they need to decorate a cardboard house they built, and now they do not have enough to finish their assignment. Beth orders Owen to spit out the macaroni he ate and he does so, covering the room with half-chewed macaroni. Suddenly, Owen catches the scent of cake nearby. Following an imaginary friend named Cakey the cake smell, Owen follows the scent to the source with Duncan pulling him on a leash. At the kitchen, Duncan, Owen, Leshawna, and Beth find a castle-shaped chocolate cake with four-tower shaped corners. The cake was brought to the daycare by Izzy who persuaded her mother to bake one by ripping the hair on her doll until her mother submitted. The kids want to eat the cake now, but Chef forbids it and reminds them of last time cake time during the day. A flashback shows the kids eating an entire cake before going on an out of control sugar rush that terrifies Chef. Not wanting to face the same scenario again, Chef will only serve them the cake at the end of the day. That way, when the kids go on another sugar rush, their parents will be the one to suffer, as Chef explains it, his way of getting revenge. Chef puts the cake in the refrigerator and locks it with chains to ensure the kids doesn't eat it before cake time.

The kids talk about the cake's rather large corner pieces and how each of them wanted to have one. As Izzy will most likely keep one for herself, the other three will most likely be given to her best friends. Since none of them are her best friends, Beth, Leshawna, and Duncan formulate a plan to get the corner pieces by pretending to be Izzy's best friends. Owen finds the plan to be dishonest and refuses to take part in it. The other three however put the plan in motion by telling Izzy that they want to play with her for playtime. Izzy doesn't suspect anything and agrees to it. She first brings them to the toy castle where she scares them in the dark while wearing a monster clown suit.

The next game the kids play is a simple game of dodgeball...or rather Izzy shooting balls at them using a bazooka. After running out of ammo, Izzy suggests they switch to tetherball to which the kids immediately says "Yes". Instead of the usual way of playing, Izzy puts the ball into her bazooka and fires it, with the increased speed knocking out both Duncan and Beth. Leshawna suggests they play another game and Izzy guides them to the kitchen to eat ghost peppers. The kids believe that this would be an easy game, but regret it the instant they eat the peppers. The pepper is so spicy the kids literally breathe fire and have to relieve themselves by drinking water. The next game is to play skydiving by jumping down from the treehouse. However, only Izzy's bag contains a parachute while everyone else has a hard landing. Leshawna begins to have second thoughts about playing with Izzy, but Duncan tells her to relax as Izzy calls them her best friends and they are one step closer to receiving those corner pieces. The kids cheer happily before collapsing to the ground in pain. It's not over for them yet however, as Izzy prepares to drive over them with the toy car.

Following the jump, Beth loses her patience and attempts to yell at Izzy, before Chef announces that it is cake time. Finally believing that their hard work will be rewarded, the kids march to the table hoping to receive their corner pieces. Harold asks for a corner piece to which Duncan retorts that he cannot do so as he isn't Izzy's best friend. Bridgette and Jude calm everyone down by telling them that they should be happy with what they received. Feeling touched by their speeches, Izzy decides to give the both of them corner pieces. Duncan, Beth, and Leshawna object as they are her best friends, but Izzy replies that she never promised them anything. This infuriates Beth and she attempts to attack Izzy before Harold stops her. This deed earns Harold a corner piece. Having enough, Duncan pounces on Harold while Beth does the same on Izzy, but they land on the cake instead. However rather than being devastated that her cake is ruined, Izzy declares a food fight. As Beth, Duncan, and Leshanwa angrily mope over how everything they did was for nothing, the other kids make a mess in the daycare while some of them become hyperactive again from the excess sugar, just as Chef had feared. As Chef tries to get the kids to calm down, Izzy, Bridgette, Harold and Noah throw cake at the camera, ending the episode.

The kids are playing musical chairs, as Chef turns the stereo on and off. Only the kids run around at least one chair for them all to get up on.

The kids playing with each other.

Duncan tells Owen that what he's eating is uncooked macaroni.

Owen spits out the macaroni he is eating.

Owen says that he smells something..

.. and Duncan asks him what is it.

Cody and Bridgette have a tea party..

..until Owen destroys it.

Chef pulls the cake away from the kids..

Izzy convinced her mom to give her a cake.

Chef tells the kids that they can't eat the cake yet.

Chef remembers how the kids acted the last time they ate cake.

The kids after eating cake.

The kids experience a sugar rush.

The kids get sad when Chef tells them they can't eat cake until the end of the day.

Chef locks the cake away from the kids.

Beth is shocked that Duncan doesn't know what's about the cakes' corner pieces.

Owen and Beth explain why the corner pieces of a cake are so good.

Owen says bye to the cake.

Leshawna, Beth and Duncan decide to buddy up with Izzy.

Izzy is playing with her dolls.

The kids tell Izzy that they want to play with her.

Izzy dressed up as a clown.

..and makes them cry.

"There could be anything in here!"
- Izzy

Izzy plays dodgeball with the kids.

The kids try to dodge the balls Izzy throws at them.

Izzy plays tetherball with the kids.

The kids get scared of Izzy once again.

Beth gets hit with a ball.

Duncan laughs at Beth getting hit with a ball..

.. until Izzy also hits him with one.

Izzy explains why those peppers are called "Ghost Peppers".

The kids eat the "Ghost Peppers"..

.. and start breathing fire because of it.

Leshawna burns down a plant.

Leshawna after she drinks water.

"Duncan, what have I said about breathing fire?"
- Chef

Duncan says that he's not sorry for scaring her.

Izzy gave backpacks instead of parachutes to the kids.

The kids get really injured because of Izzy.

"Is this what she does all day? How is that girl still alive?"
- Leshawna

The kids think they will sure get corner pieces.

Izzy runs over the kids.

The kids after Izzy ran over them.

Beth gets angry at Izzy

Chef tells the kids that it's cake time.

All the kids gather up to eat cake.

Harold calls for a corner piece..

.. which angers Leshawna, Duncan and Beth.

Jude and Bridgette think everyone should be happy with whatever slice they get.

Leshawna reminds Izzy that they're her best friends.

Izzy tells them that she never promised them corner pieces.

Beth gets angry at Izzy once again.

Beth feels sorry about what she did.

The kids start throwing cake at each other.

Owen after he eats cake again.

Retrieved from "https://totaldrama.fandom.com/wiki/Cuttin%27_Corners?oldid=1565920"
Community content is available under CC-BY-SA unless otherwise noted.