Almost all of the original contestants

Clé Bennett
DJ's mother, commonly referred to as Momma, is mentioned frequently by DJ during the series. She makes her first appearance as a hallucination by DJ in The Sand Witch Project, before appearing in person in The Aftermath: II.

DJ's mother comes off as being a very strict, harsh woman, wanting her son to be the very best. It appears she has spent much of DJ's life whipping him into shape and making him into a well-mannered gentleman. As a result of this, DJ has grown very attached to his mother and becomes a "momma's boy" of sorts. His bond with his mother's disciplinary persona is so strong that the mere thought of her can guilt him into halting wrongdoing. DJ's mother is also shown to be intolerant of misbehaviour from anyone else, angrily attacking Sierra when she feels she is invading their privacy.

She acts similarly when she lays out the ground rules as to the kind of behaviour that is allowed on her bus. As stern as she can be, she can just as easily be generous, and a sweet lady. In Celebrity Manhunt's Total Drama Action Reunion Special, the contestants are given consent to use her bus to drive to New York. She is very skilled at cooking, having been the inventor of the legendary Momma's Spice, which can make any food palatable and delicious. She is also likely the reason why DJ's culinary skills are so exceptional.

Although she is never seen or mentioned in the first season, DJ initially mentions his mother in his biography, written on the Total Drama Island: Totally Interactive! website. It mentioned that DJ joined Total Drama Island to win the grand prize and give his "momma" the ability to move back to her homeland, Jamaica, where DJ and his mom were both born. Her debut physical appearance is in DJ's audition tape. Her appearance was in a photo; however, she looked different from her appearance in the rest of the series. Instead of her normal flower hat and long hair, her hair changed into a big afro, and she wore an orange tank top. She also has a different body type in DJ's audition tape. In his audition tape, DJ ended his audition by crying over his "momma," saying that he loves her.

She is mentioned numerous times during the beginning of Total Drama Action, implying that DJ has an extremely close bond with her. She is also mentioned most of the time for her talent in cooking. She gave DJ a container of Momma's Spice, a spice that was able to make even Chef's disgusting meals taste delicious. The main ingredient of the spice was a mystery on the actual show until The Aftermath: II and Best. Game. Ever. where it was revealed to be Hungarian paprika. She first makes a very brief appearance in a photo in One Flu Over the Cuckoos, but with different colours, her hair and skin were lighter, her hat and jacket were neon purple, and her sweater was green, her flowers were also different, but her body shape was the same as her current one. She played a large part in DJ's elimination in the second season when, in The Sand Witch Project, DJ dreams about her being angry with him about his illegal alliance with Chef. Momma was seen with her flower hat and long black hair, verifying that she appeared this way at present. In the end, DJ's conscience told him to admit the truth about what he did with Chef and to quit the competition.

She makes her first appearance in person in The Aftermath: II, and is there to make sure DJ tells the truth. However, this conflicts with Geoff, who wants him to lie, so DJ can get hit with an anvil and get the show higher ratings, to which she proceeds to throw vegetables at Geoff. DJ's momma didn't talk at all during the aftermath show, but she did make sandwiches for everyone.

DJ's mother didn't appear again until Celebrity Manhunt's Total Drama Action Reunion Special, where she had her most significant role in the show. She appears the beginning on a cooking show with DJ, which eventually got them into trouble when their cooking turned out to be deadly. DJ and his mother lost all their money and possessions and left with only a tour bus and two barrels for clothes, however, they were later seen wearing their regular clothes again, meaning that the barrels were most likely just a one-time joke. She is immediately interviewed by Sierra, who asks DJ questions that might show an offensive side. However, his mother immediately shows her over protectiveness for her son and scolds Sierra for thinking that DJ could hate someone, and slaps her with enough force to knock her down. Later on, when Tyler trips and crashes into Ezekiel and Beth, eventually causing the entire cast to get in a pile-up, Ezekiel is seen attempting to use slang to express his frustration. DJ's Momma does not approve of this and swiftly slaps him over the head. When the cast has to find a way to get to New York City by the next day, DJ suggests that they take the tour bus his momma and him had. However, his momma told them all to wipe their feet first, much to their dismay.

She doesn't like much of what the castmates do on the bus. She is overprotective of the new upholstery (when Beth starts to get motion sickness), the table (when Leshawna doesn't use a coaster for her water glass), carpeting (when Tyler is running, while carrying an armful of Owen's smuggled chocolate), and almost everything else. She also dislikes Owen when she discovers that he brought caramels onto her bus, and found it insulting that he brought outside food onto the bus instead of eating her cooking. She also seems quite disgusted when Leshawna offered her bra as a catapult, as she apparently (off-screen) took off the bra to do so right in front of her. She is angry at Courtney for crashing her bus into a canyon, but she goes with Geoff, Trent, Justin, Katie, Sadie, Eva, and Beth to find help. When she finally arrives at the Celebrity Manhunt studio, it is too late to get help since Chris had rescued the other contestants before and asked them to compete in the third season. DJ mentions her in the confessional, where he said he would win this season for her so he could buy her a big house, and possibly a new bus.

DJ's mother is mentioned in Walk Like An Egyptian - Part 1 by DJ, twice. She is first mentioned when DJ comments on Alejandro, saying that he is "as smooth as her gravy." She is then mentioned when the cast is about to get to Egypt, with DJ stating that each second the cast is getting closer to adventure, but further away from her.

In Super Happy Crazy Fun Time Japan, while the cast is singing about the things they want to do before they die, DJ mentions that he wants to see his Momma before he dies and frequently mentions her in the song, even hoping that she saves their lives from the fall.

In Anything Yukon Do, I Can Do Better, DJ begins to cry since the frigid temperatures of the Yukon reminded him of his mother's freezer. His crying ultimately freezes his eyes shut.

In Can't Help Falling in Louvre, DJ mentions to Lindsay that he doesn't want his mother to know he's a vegan, as she considers them chicken-loving chickens. After Team Victory loses yet again, DJ happily asks Lindsay to vote him out so he can head back home. When Chris announces the two will partake in a challenge to determine who stays, DJ purposely throws the challenge, instead of drawing pictures of him and his momma. After the judges see DJ's design, he, thinking he's lost, happily states (while dancing and singing) that he's coming home, and is disappointed to learn he won the challenge after the judges thought that Lindsay's outfit was too busy and too over-the-top. 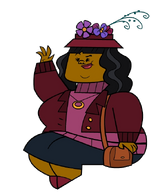 DJ dreams his mom being angry at him for being in an illegal alliance.

A scene from Momma's Heaping Helping.

DJ's Momma after hitting Sierra for offending her family.

DJ's Momma is seen in a picture as DJ's choice of "Friend From Home" in One Flu Over the Cuckoos.

DJ's Momma slaps Ezekiel after he uses slang at the Gemmie Awards.

DJ's Momma and Leshawna play cards together on her tour bus.

Retrieved from "https://totaldrama.fandom.com/wiki/DJ%27s_mother?oldid=1602235"
Community content is available under CC-BY-SA unless otherwise noted.