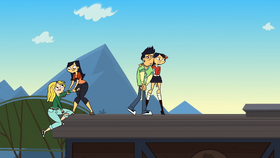 The five teams head to India where they pick tea leaves and deal with a dangerous train ride to the Chill Zone. One continues to have problems in dealing with his love of another, until a team forces him to finally take responsibility for himself and push forward their feelings. Meanwhile, two partners go through their ultimate trial, where one finally takes charge and tries to help them to survive; while nearly saved due to two cheaters long penalty, they fail to make it and in the end leave the race with rekindled feelings for one another.

The teams must now fly to India and take a cab to the mountains of Darjeeling. During the flight, Devin ponders over whether he should reveal his feelings for Carrie, but ends up chickening out. MacArthur is still affected by her actions in the previous episode, and as a result promises she will follow Sanders's orders. Upon arriving at the airport, the teams immediately succumb to the effects of the intense humidity. For the challenge, teams must go into some tea fields and fill a basket with tea leaves, and their haul must be approved by a local to received their next Travel Tip. Stephanie is unable to comprehend the heat but with some motivation from Ryan, she carries on with the challenge and refuses to ask him for help.

The Ice Dancers approach and suggest the Police Cadets to join them in sabotaging the Sisters. However, Sanders refuses, believing that it'll result in a penalty. Josee warns the Cadets that they would be the next team eliminated but Sanders still refuses. The Ice Dancers manage to sabotage the Sisters by opening the hatches of their baskets while diverting their attention to an alliance offer, which they also refuse. For the next challenge, the teams must now ride on a train and try to fight their way into the front car before reaching the Chill Zone. As the other teams make their way onto the train, the Daters are still stuck trying to get tea leaves after Stephanie's are blown away by the wind, but Ryan refuses to let this affect them and harvests an entire bush of the leaves, sending the Daters onto the next challenge. As other teams try reaching to the first car, the Ice Dancers try to sabotage the other teams by disconnecting their car from the others.

After having trouble with the animals, the Best Friends and Sisters ally together and try walking over the train cars instead. While helping her up, Emma finds out that Carrie has not gotten over Devin and wishes that he would talk to her. The Ice Dancers manage to separate the cars but before they are left far behind, the Sisters and Best Friends manage to jump onto the first car. Emma states that they had to do it to stay in the game, but Kitty teases her about enjoying it. The Police Cadets manage to fight their way through the animals, but they find themselves being separated from the other teams. As the Cadets arrive, MacArthur sees Devin at the carriage and thinks Devin pulled the lever to separate the train cars. She declares to the Best Friends they have earned themselves a new enemy. Upon seeing a heartbroken Carrie, the Sisters call out Devin for his behavior, only for him to reveal he has a crush on Carrie. They are disbelieved by Devin's statement, leading Kitty to slap him and Emma to curse at him, where they proceed to reveal that Carrie had feelings for him all along. Devin is overjoyed by the news, and becomes even more determined to share his feelings with Carrie.

Sanders is under the impression they had fallen behind the other teams, to which MacArthur comes up with the idea of riding the bull and catches up to train. Due to their attempt to sabotage the other teams, Don gives the Ice Dancers a one-hour penalty. As the other teams begin arriving at the Chill Zone, the Daters realize that their train had stopped and race to the finish but stop to reveal that they're dating again, giving enough time for the Ice Dancers' penalty to end and for them to secure fourth place. Despite coming in last and being eliminated, the Daters believe that the race helped strengthen their relationship, due to the many bumps and hardships they faced along the way.

The Ice Dancers are first to grab the tip.

Darjeeling is the next destination.

Kitty takes a photo of a sleeping Emma.

MacArthur is still crying for causing Sanders's injury in the last episode.

Stephanie has some problems with the challenge.

Ice Dancers pretend they want to form an alliance with the Sisters.

The Sisters were tricked by the Ice Dancers in the first challenge.

The Ice Dancers are first to finish the first challenge, which annoys Don.

Devin gets headbutted by a goat.

Jacques attempts to disconnect the carriages.

The Ice Dancers go back in the train car after the cars are detached.

Devin accidentally hits himself in the groin once again.

Believing Devin separated the carriages, MacArthur declares him to be her enemy.

Devin reveals the Sisters that he is in love with Carrie.

The Ice Dancers are given an hour penalty for detaching the train cars.

The Daters talk to eachother in the train.

The Daters made up and started making out, seeing how much they really do love each other.

Sanders forms an idea to ride a bull.

The Cadets ride the bull from the train all the way to the Chill Zone.

The Daters finally realize that the train isn't moving.

Due to Ice Dancers' one-hour penalty, the Sisters are the first team to arrive at the Chill Zone.

The bull that the Cadets are riding runs right over Devin.

MacArthur is happy whenever they beat the Ice Dancers.

The Ice Dancers become nervous when there's only one team that hasn't arrived.

The Ice Dancers' penalty ends as they place fourth, thanks to the Daters delaying themselves by saying they're dating again.

Retrieved from "https://totaldrama.fandom.com/wiki/Darjeel_With_It?oldid=1631119"
Community content is available under CC-BY-SA unless otherwise noted.