Daniel DeSanto
Dave was a contestant on Total Drama: Pahkitew Island as a member of the Waneyihtam Maskwak.

Due to seeing himself as the only "normal" person on the show, Dave can be critical of people and expects little of them. He is a logical thinker, albeit a little uptight, and is a complete neat freak and has an intense fear of germs and bacteria. Dave is easily frustrated by his teammates, believing them (with the exception of Sky and Shawn) to be crazy, and often belittles them. Despite his pessimism, he generally means well and can be considerate of other people's feelings. However, all this began to drastically change as the season progress. His affection for Sky has made him prone to anxiety over being separated or turned down by her, making Dave a lot more whiny, prone to mood swings and affecting his overall performance in the competition. By the finale, Dave's mental state turns for the worse after discovering that Sky already had a boyfriend, turning him vindictive and out for revenge against against the girl he thought he could trust.

Dave make his first appearance in So, Uh This Is My Team? as one of the fourteen new contestants competing. Upon reaching Pahkitew Island, he is placed on team Waneyihtam Maskwak along with Sky, Shawn, Ella, Sugar, Beardo and Leonard. Dave is immediately frustrated with his team's odd antics and thinks very little of them, believing all of them, save for Sky and, to a lesser extent, Shawn and Ella, to be crazy and worthless. In fact, during the first campfire ceremony of the season, he wants to vote four people off. Despite his complaints, Dave himself isn't helpful in all of the challenges, worried of getting injured or dirty.

During his stay on the island, Dave develops a crush on his teammate, Sky. Wanting to get closer to her, Dave often goes wherever Sky does, including following her to forage for food and trying to partner with her in Twinning Isn't Everything. In addition, Dave also agrees with whatever Sky says, even though he voices against it in the confessional. While Sky is often angry with the mistakes he makes, the two of them nevertheless become closer as the season progresses. Dave eventually gets another admirer in the form of Ella after helping her in A Blast from the Past. Unfortunately, Dave is unaware of her crush and unknowingly breaks her heart after rejecting her in the next episode, leaving Ella sad for the entire duration of the episode until she is eliminated.

Dave's infatuation with Sky begins to affect him. This is first displayed in Mo Monkey Mo Problems when Shawn tries to talk him out of his plan to impress Sky, as she only cares about winning the money rather than being in a relationship with him. Dave hears him, but waves it off. Although Sky admits that she has feelings for Dave as well, she has something else she wants to say. However, Dave cuts her off before she can finish. When Sky is transferred to the opposing team in This Is The Pits!, Dave is deeply saddened and cries hysterically in the confessional.

He still has a glimmer of hope that they can be together regardless. The two of them still help out each other in Three Zones and A Baby. Dave believes that this is a sign that they can still be together. Although he keeps getting injured throughout the episode, the biggest impact to hit him is when Sky gives his position away to Chef and is shot by his meatball launcher. Dave believes that Sky no longer likes him and begin to cry hysterically in the confessional. He even tells Shawn to let him quit the game as "nothing matters to him anymore". Attempting to boost his self-confidence, Shawn tells him to win the challenge in order to show Sky that he is still worth her love. This works, and with his team using him as a snowboard, they reach the finish line first.

Still listening to Shawn's advice, Dave tries applying this to prove to Sky in Hurl and Go Seek that he is a strong player by trying to finish his Juggy Chunk before her, despite its disgusting nature. Even after Sugar had already won the challenge, Dave and Sky continue to drink their Juggy Chunks, with Dave finishing his faster than Sky. Dave then misguidedly boast about beating Sky. However, Dave is unaware that Sky is angry about losing the pre-challenge and she sternly yells at him that they will never be a couple. This saddens Dave to the point of crying. Still hoping that they have a shot, Dave tries to find Sky only for him to be rejected again. Angry at the cold rejections, Dave proclaims he doesn't needs Sky before howling like a wolf to exert his "lone wolf" status. He is the first person to be captured by Sugar. While helping her to find the other contestants, he watches two love birds and tells the male not to trust the female. Sugar realizes what has happened and manages to encourage Dave to lead her to where Sky is hiding. After the challenge ends and his stomach is pumped, Dave confesses that he told some of the contestants to vote him off, seeing as his chances with Sky are over. At the Cannon of Shame, Dave tries to say his goodbye to her one last time, but she is not there. Depressed, Dave tells Chris to fire him away.

Dave returns in the finale as Sky's helper after she turns the slot machine twice and ends up with him both times. Upon finding out about this from Chris, Dave goes into depression again. Sky, determined to make Dave as useful as possible, manipulates him by kissing him, saying that she was upset about him being the helper because she did not want to be distracted by her feelings for him. With his new found confidence, Dave becomes determined in helping Sky to win the million dollars. At one point, Dave loses his hair after Sky provokes the mechanical kitten from Scarlett Fever to melt the snow that they are trapped in.

In the end, Chris decides to make the challenge more interesting by revealing Sky's audition tape to Dave, in which she reveals she has a boyfriend back home named Keith. The shock of discovering that Sky had a boyfriend the entire time causes him to finally lose his patience with Sky. With this, Dave angrily yells at Sky and vows to ensure that Sky never gets the million. With the island's weather control at their disposal, Dave and Jasmine activate all of the island's traps to prevent Sky and Shawn from reaching the finish line, as Chris promised to give them half of the million each if neither of the finalists complete in time. Dave, however, is more interested in getting revenge on Sky and wishes to burn the million dollars she wants so much in front of her. However, one of the finalists manages to reach the finish line in the end, disappointing Dave. It is later revealed that Chris and the other three contestants had accidentally left Dave behind on the island. As Dave sighs for failing, he admits that "it can only get better from here", to which he discovers that Scuba Bear 3.0 is standing right behind him.

Dave's audition takes place in his garage, where he enters from the left and messes up his introduction. He starts over, but continues to fumble over his words and wishes he had written down what he wanted to say. He states that he would have, but the only available pen was chewed on, which grosses him out. Due to this, he walks off again and comes back with disinfectant, which he starts rubbing on himself, and comments that he would be a vicious, cold competitor that only cares about winning the money. 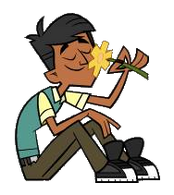 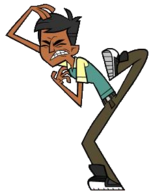 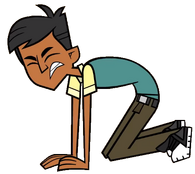 Dave on the ground. 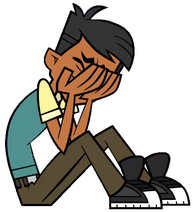 Dave after he lost his hair. 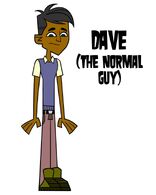 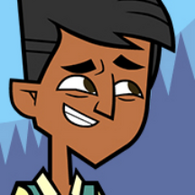 Dave is annoyed by Beardo and Leonard's behavior in the opening sequence.

Dave is confused by Leonard's behavior.

Dave doesn't have an actual parachute.

Dave with his team.

Dave is annoyed with his team's incompetence.

Sky tells Dave to comply with the rest of the team's wishes.

Dave is hesitant to take the greasy leash from Ella.

Dave after finishing his leg of the course.

Dave mistakenly believes he had to kiss Shawn.

Dave and Sky are about to kiss for the challenge...

Dave is disgusted after getting hit by Shawn's snot.

Dave and Sky in the woods.

Dave helping Ella out of the water...

Dave tries to figure out which one of the twins left.

Ella thinks Dave is throwing a picnic for her...

...causing him to freak out.

Once again, Dave and Sky are interrupted by Sugar, who belches loudly this time.

Sky helps Dave out during the challenge.

Dave attempts to win the challenge in order to impress Sky.

Dave tries to show Sky that he can beat her.

Dave is rejected by Sky again.

Dave is knocked out by his own shoe thrown by Sugar.

Dave is satisfied with his elimination.

Dave helping Sky in the finale.

Sky and Dave get trapped in a giant snowball.

Dave being piggybacked by Sky.

Dave pretends to like Jasmine's idea to get on her good side.