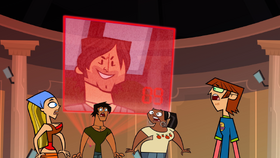 Trip to a local cheese factory

Courtney and Lindsay
The two teams have been merged as the cast faces off in a spy challenge filled with lasers, explosives, bombs, and really bad accents! As one castmate trusts his previously reluctant brain throughout the challenges, another, who still seems to be shunned, successfully makes an alliance with two others. After the blackmail plot of a schemer gets foiled, two winners are declared and this earns them a trip that was not worth the effort.

The episode opens to Leshawna complaining about the show's disgusting food. She then notices the other six remaining castmates glaring at her, since they are still angry about Leshawna insulting all of them during her spa trip. Leshawna asks for at least her own team to support her, resulting in Harold sarcastically cheering her on by saying her name, with very little emotion. Leshawna sarcastically tells Harold not to strain himself, and that he might get wind burns from moving so fast. Duncan admits that he doesn't trust anybody anyway.

Lindsay attempts to get into the girls' trailer, reminding the door that she was there earlier. When she touches the door handle, a camera appears out of nowhere. It scans her face and then says, "Intruder alert! Entry denied!". The stairs flip over and turn into a slide, sending Lindsay falling through a trapdoor into a pit in the ground. Duncan runs over to her, only to be shot in the neck with a tranquilizer dart, and falls into the pit himself. Courtney runs to Duncan's aid (calling him "Duncy" as she does so), and is knocked into the pit by a flying bowler hat that hits her head. Leshawna, Justin, and Beth run into the boys' trailer for safety, locking Harold out. Harold tries to find safety in the confessional, and in the process, talks about being worried that the producers are actually trying to kill the castmates. At that moment, an intern knocks him out with a nightstick. Justin worries about what happened to Harold. Beth becomes worried, but Justin tries to help her by telling her to focus on his beauty. She begins crying, making Justin think he's hideous. A gas bomb is thrown through a window, releasing gas that knocks out Beth, Justin, and Leshawna.

Everyone wakes up into consciousness in a cave. Beth accidentally elbows Justin in the eye while getting up, giving him a black eye. After noticing this, Justin runs off to find ice for it. Justin sees his reflection in a mirror, and once again thinks he's a hideous freak and that his modeling career is over. Courtney loses her personal digital assistant, but Beth finds it and gives it to Courtney, who accuses Beth of stealing it again. Chris appears on a projection and (in a poorly-imitated Jamaican accent) tells the castmates that the challenge is based on the spy movie genre. Chris says that the castmates will need to defuse a bomb, and jump from an exploding building. Courtney asks if anybody has experience with bombs, and Lindsay claims to, saying that she was in a musical in which the director said "bombed."

Duncan says that Harold should stay away from bombs whose says the team will lose if Duncan uses the same technique of foiling booby-traps. But Chris then announces that as of now the teams are merged, and it's every castmate for themselves. Then a 6teen theme song parody comes on after Leshawna complains about Chris breaking up the teams after all they've been through together. The castmates try to find an exit, and Justin finds one by accident. It leads to an elevator that leads to a fancy water tower. Justin believes that this is the beginning of a new relationship with him and his brain.

Chris then appears on a hologram screen, and tells them they must get the bag in the glass at the center of the room. While they think it's easy, it then shows that they also have to avoid the laser beams, which can slice them in half if they aren't careful. Leshawna, Harold, and Duncan finally decide to form an alliance during the challenge. Beth and Lindsay fight about how they got stuck between laser beams, and Justin has some issues thinking only about himself. Courtney shows her flexibility by jumping around and sneaking under the lasers, something which earns her an admiring howl from Duncan, who stares at her butt while she slides below the lasers; she gets to, then breaks the case and acquires the bag. Once she gets the bag, she finds out that there are just wire cutters and a grappling hook in it. Leshawna then remembers that Chris mentioned jumping off of an exploding building, and Chris begins the ten second countdown. Everyone begins to panic and hug each other, Courtney hugs Duncan, Beth hugs Lindsay, Leshawna hugs Justin, and Harold is in fetal position, alone. Chris then begins to laugh hysterically telling them it was just a joke. Unfortunately, he then begins the real countdown.

Courtney, being the only one with a grappling hook, offers the other players a quick escape, in exchange for half the prize money from whoever won the game. Although hesitant, the other castmates agree, and Courtney gets them all out using Harold's belt. The next challenge is disarming bombs (which are explosive timers tied to trash cans). Should anyone fail to deactivate their bomb, it will explode and cover them in smelly garbage. Courtney tries to contact her lawyers to get her the best disarming experts, but is unable to reach them. Lindsay decides to cut the blue wire (as it's the most fashionable one). Courtney is hesitant to trust her, but tosses her the cutters. Lindsay cuts the wire and successfully deactivates her bomb. The other castmates (in various ways) cut their blue wires. Lindsay's bomb is then deactivated after she cuts the wire. The castmates relax, until they realize they can still hear the ticking. The other bombs explode and Chris (from a safe distance) explains that they wouldn't program all the bombs the same way, as it would be too easy and no fun.

The castmates then bathe in a tomato juice pool to get the smell out (even though Lindsay defused her bomb, she was still hit by the other active ones). The castmates refuse to let Courtney join unless she calls off their obligation to split the prize money. Courtney weighs the options, and reluctantly agrees. Chris then tells Lindsay and Courtney that they've won a tour of a cheese factory. Courtney is unhappy, stating that she's lactose intolerant. Still unable to reach her lawyers, she sighs and dunks her personal digital assistant as well as herself in the pool of tomato juice.

Courtney and Lindsay were seen in the Lame-o-sine together, driving to the cheese factory as a reward for winning the challenge. Lindsay asked Courtney to name every cheese she could think of, among several other things, which then annoyed Courtney to the point where she threw herself out of the limousine.

Leshawna's team no longer trusts her due to the events of the previous episode.

"And that's the only million Leshawna will ever see!"

Duncan is hit by a tranquilizer dart before falling into the hole.

Courtney rushes to Duncan's rescue, only to be knocked down with him by a bowler hat.

An intern knocks Harold out during his confessional.

Justin tries to calm Beth down using his looks...

...but finds he has completely lost his charm.

Leshawna refuses to get caught.

Beth is knocked out by the gas..

Duncan is noticeably checking out Courtney as the castmates awaken.

Beth accidentally elbows Justin while getting up...

...which gives him a nasty black eye.

Courtney takes her PDA from Beth who she believes was trying to steal it.

Chris as a Bond-Villain parody.

Leshawna and Duncan argue over what accent Chris is talking in.

Courtney tries to find out if anyone knows how to defuse a bomb.

A parody and tribute to Total Drama's sister show, 6teen.

Harold and Justin are seen together in the 6teen parody...

...followed by the rest of the cast.

A moment from the 6teen parody.

Duncan refuses to let Harold get anywhere near the bomb.

Lindsay and Beth are saddened by the thought of not being able to share lip gloss.

While trying to find an exit, Lindsay runs into a cutout.

Harold is impressed by the structure of the building.

Justin confesses that he must rely on his brains from now on.

Duncan almost gets hit by a laser.

Lindsay and Beth's reaction to the thought of being cut in half.

Courtney displays her skill of being able to maneuver around the lasers.

Leshawna has trouble maneuvering around the lasers.

Justin finds out that his mirror is able to deflect the lasers.

Courtney's athletic skills allow her to maneuver through the lasers.

Harold and Duncan glare at each other over Leshawna's protests.

Harold and Duncan help Leshawna get back up after she gets stuck in between the lasers.

Leshawna comments on how well the three of them work together and proposes an alliance..

...but Harold disagrees due to not wanting to work with Duncan.

Leshawna makes them agree to the alliance anyway.

Courtney finds it odd that a grappling hook and wire cutters were the items inside the bag.

The cast mates panic as the building is about to blow up.

Courtney hugs Duncan as the building is about to blow up.

Leshawna ends up finding an exit from the building.

Courtney wishes to get something in return for letting them escape.

"I knew there was a reason we picked Courtney. She's nasty. I loooove nasty!"

Courtney doesn't want to share her prize with anyone.

..followed by Justin and Lindsay..

..and finally Beth and Leshawna.

Justin jumps into Courtney's arms as they prepare to escape the exploding building.

The cast slide down the line to escape the building.

Harold expresses anger because of another false alarm.

Harold believes Duncan should know how to defuse a stink bomb.

A nervous Courtney ponders over whether or not to give the wire cutters.

Justin nervously waits to see if Lindsay's decision was correct.

Courtney decides to give Lindsay the wire cutters.

Harold and Duncan wait for Lindsay to cut the wire.

Duncan reminds everyone that their wires need to be cut.

Duncan uses the spike on his collar to cut the wire.

Justin and Beth reflect sunlight to cut their wires.

Courtney cuts the wire with her cutters.

Leshawna realizes that her bomb's timer is still running.

Beth and Lindsay panic after realizing that the bombs have not been defused.

Courtney screams in terror moments before the bombs go off.

The cast appalled after finding out that the soup is their dinner.

Courtney refuses to call off her deal with her cast mates.

However, she ends up doing so anyway due to the stink.

Courtney does not wish to go to the cheese factory.

Lindsay has quite the opposite reaction.

Courtney's reaction after her lawyers are unable to get her out of this.

Courtney jumps off the Lame-o-sine to escape from Lindsay.

Retrieved from "https://totaldrama.fandom.com/wiki/Dial_M_for_Merger?oldid=1637548"
Community content is available under CC-BY-SA unless otherwise noted.