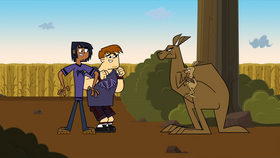 Still in Australia, the teams solve a rabbit infestation before gliding to victory. Two competitors mess with one team and steal from another in order to secure both revenge and victory; while someone tries to deal with their partner, still in denial over a breakup. Two contestants mess up while trying to accomplish their goals while another tries to keep managing with his oblivious partner. In the end, a showdown of both teams leads to one team's departure, but the revelation of a double-elimination likewise removes the others.

Despite Carrie's attempts to console her teammate, Devin still has not gotten over the heartbreak he had experienced in the previous episode, and is in denial about his ex-girlfriend, Shelley, breaking up with him. The first challenge is an All-In, in which the contestants must catch ten bunnies on a farm to get their next tip. If they manage to find the rare albino bunny, then they can directly skip to the next challenge. While some of the contestants have trouble in the challenge, the Goths manage to catch the rabbits with ease due to the rabbits being affectionate towards Ennui. In the interview, they state that they hate adorable animals' attraction. Crimson then states that they simply hate adorable. Meanwhile, the other teams have a lot more trouble than the Goths. Rock gets his legs stuck in rabbit holes, as Spud is unable to help. Chet and Lorenzo keep believing they have found the albino bunny, when it is, in fact, a kangaroo, which keeps attacking them.

Josee is still furious over the events of the previous episode, and attempts to sabotage the Police Cadets by making them believe that one of the bunnies (which has Ennui's makeup on) is an albino. Upon seeing it, MacArthur gives up on all the other bunnies and pursues the fake albino rabbit. Although the Best Friends manage to complete the challenge, Carrie overhears Spud talking about the seven stages of heartbreak and decides to stay behind and learn it from him. Spud sings a song he wrote about the seven stages of breakup to Carrie, but spends a lot of time singing the instrumental, making both of them fall behind in the challenge. Chet and Lorenzo continue to try and capture the kangaroo, believing it to be the albino rabbit. In their interviews, they state that the other member of their team is the smart one. They only end up getting repeatedly beaten up. MacArthur then uses a tractor to chase after the rabbit, destroying the crops of the farm in the process. The chase finally leads both of them into the river, where the rabbit's makeup washes off, revealing to be fake. As MacArthur falls into the lake, Josee uses Brody's crush on MacArthur to get him and Geoff to run after her, allowing the Ice Dancers to steal the Surfer Dudes' rabbits.

The Ice Dancers are the first team to complete the challenge and must now compete in another All-In. In this challenge, the teams must fly a glider from Australia to the mountainous area of New Zealand, where the next Chill Zone lies. The Daters manage to obtain ten bunnies after two of them give birth, while Spud manages to obtain ten bunnies from a snake. As more teams complete the challenge and take off into the air, the Ice Dancers are the first to reach the Chill Zone, much to their excitement. The Goths adopt a third member which is a pet bunny named Loki after realizing how the rabbits act as the plague of Australia. While getting repeatedly beaten up by the kangaroo, the Stepbrothers manage to find the real albino, letting them proceed to the next challenge.

As the Surfers and Cadets lag behind the other teams, MacArthur covers herself with carrots to obtain bunnies for the both of them. Due to lack of focus, Spud crashes the plane into a mountain, stranding himself and Rock. The Stepbrothers do not fare well as the kangaroo climbs onto the Stepbrothers' plane, which then crashes into the mountain. Spud tries to get himself and Rock to get down the mountain to the Chill Zone. However, Spud's motivational speech leads causes an avalanche, which sends the Rockers to the Chill Zone at the same time that the Stepbrothers arrive after being chased by the kangaroo and its child. After viewing the replay, Don reveals that having arrived last, the Stepbrothers are eliminated, only to remember that it is a double elimination episode, sending the Rockers off the show as well. As both teams depart, Chet and Lorenzo invite Rock and Spud to play video games with them, which they gladly agree to.

Don puts a bag on Devin's face, tired of seeing his crying.

Chet tells Carrie to step aside.

The Stepbrothers draw faces on their chests with a permanent marker.

The Albino bunny, a rare bunny that automatically advances the team that finds it.

The teams are determined to "save the farm".

Josee is obsessed with defeating the Cadets after the events of the previous episode.

Josee pretending to be friendly to Ennui to borrow his make up...

...and despite not falling for it, he lends it to her anyway.

Rock's foot gets stuck in a rabbit hole.

Ryan manages to catch a rabbit with his teeth.

The Stepbrothers mistake a kangaroo for the albino bunny.

Lorenzo gets trampled by the kangaroo.

The Cadets "subduing" the rabbits with their "guns".

The Ice Dancers laugh as their plan works.

Devin goes into the first stage of heartbreak: Denial.

Spud sings to Carrie the "Seven Stages of Heartbreak".

The Stepbrothers capture the kangaroo.

MacArthur chases the "albino bunny" on a tractor.

Even after a fiery explosion, MacArthur doesn't give up her pursuit.

MacArthur gets cocky after cornering the rabbit...

...and the Stepbrothers' kangaroo promptly lands on her.

The Surfers collect all of their rabbits.

The Ice Dancers trick the Surfers into checking on MacArthur...

...and steal their bag of bunnies.

The Ice Dancers take off into first place.

Owen uses his noxious fumes to knock out the bunnies.

The Sisters crash into each other while trying to catch bunnies.

The Stepbrothers are kicked by the kangaroo yet again.

A black bunny pops out of The Goths' bag.

The Daters' bunnies suddenly reproduce, giving them the ten they need.

...that contains all the rabbits they need.

The makeup washes from the "albino" bunny.

The Ice Dancers hug each other upon reaching the finish line first.

The Ice Dancers are surprised when Don says they've won by using skill and good sportsmanship...

...though he was kidding and just doesn't care enough to look into their win.

The Daters glaring at each other on their jet.

The Goths adopt one of the bunnies, naming him Loki.

The Stepbrothers find the albino bunny.

MacArthur wears a suit made out of carrots...

...and is pounced by the bunnies, securing a travel tip for her and the Surfers.

Devin moves on to the second stage of heartbreak: Rage.

Owen farts in the jet.

The Best Friends and the Reality Pros crash land onto each other.

The kangaroo is revealed to have followed the Stepbrothers, and breaks one of their plane's wings.

Spud tries to carry Rock to the finish line, but ends up causing an avalanche.

The Stepbrothers are chased by the kangaroo to the Chill Zone.

After an avalanche, the last two teams wait for the instant replay of who lost.

The Stepbrothers are eliminated from the race after Don reviews the footage.

The Rockers are both shocked after being eliminated from the race as well.

The Stepbrothers and the Rockers make their departure.

Retrieved from "https://totaldrama.fandom.com/wiki/Down_and_Outback?oldid=1631108"
Community content is available under CC-BY-SA unless otherwise noted.