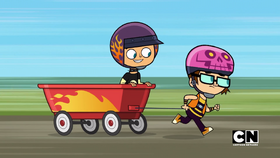 Duncan leads Beth to believe she's broken his battery-powered bike and makes her chauffeur him around in a wagon for the day as punishment.

Chef takes all of the class (minus Harold) on a walk.

Beth shows the kids what her bees can do.

The kids are amazed by Beth's bees.

Duncan shows off his bike to the kids.

Owen claims that Duncan's bike is the best thing that he has ever seen..

Noah and Owen are in love with Duncan's bike.

Duncan starts talking about his bike.

Beth drinks hot sauce to show to the kids that she can also do fire.

"You're right, coin! Much safer in her stomach."
- Hotdog

Beth burns the fur off of a bird.

Beth gets attacked by bees.

Noah gets hit by the skull on Duncan's bike.

Duncan claims that his bike can do anything.

Duncan wants Noah to record what he's about to do.

Duncan runs over a squirrel.

Duncan jumps over the picnic table.

Duncan poses for the camera.

"That birdie had wheels!"
- Cody

Noah tells Duncan that he got it all on video.

Duncan and Jude decide to have a race.

The kids are excited for the race.

Duncan notices that his bike got ruined.

The bees took Beth all the way up to space.

Beth lands on Duncan's bike and thinks that she ruined it.

Beth asks Chef if he can fix Duncan's bike.

Duncan wants Beth to pull him around in a wagon until Chef fixes his bike.

Chef is okay with Beth pulling Duncan around in a wagon until he fixes his bike.

Beth is not okay with pulling Duncan around.

Duncan wants Beth to do music for him.

.. which annoys Duncan and he orders her to do beat box instead.

Duncan orders Beth to make him a sandwich.

Duncan doesn't like the sandwich Beth made for him because it isn't hot.

Beth drinks hot souce and farts on Duncan's sandwich to make it hot.

Duncan orders Beth to paint flames on the wagon.

Cody gets scared by Beth.

Chef is trying to understand the german instructions.

Beth's reaction when she sees that..

.. Duncan's bike is even more broken than it was before.

Chef tells Beth that he will fix the bike once he will be able to understand the german instructions.

Beth uses her head to break out of the daycare.

Duncan thinks Beth might be a better bike than his older one..

Beth takes Duncan to the corner store so that he can fill his bladder.

Duncan orders Beth to take him to a better store.

Duncan notices that Beth parked in a no parking zone.

Beth has a hard time taking Duncan back to the daycare.

Beth and Duncan make it back to the daycare.

Beth notices that the soda cup Duncan gave to her is completely empty.

Duncan tells Beth to take a rest because he wants her to be his bike during his race with Jude.

Noah asks Beth why is she letting Duncan order her around all day.

Noah shows Beth that it wasn't her who ruined Duncan's bike.

Beth and Noah team up to get revenge on Duncan.

Noah tells Chef that he will fix Duncan's bike.

Noah after he did some modifications to Duncan's bike.

Beth and Noah are ready to get their revenge on Duncan.

Duncan notices that his bike got fixed.

Duncan and Jude are ready to race.

Duncan notices that his bike is falling apart.

Duncan then accidentally goes into a clown academy.

Duncan sees the finish line and thinks that he might still win the race.

"I never broke your bike! You lied!"
- Beth to Duncan

Beth ruins Duncan's bike and makes him lose the race.

The kids' reactions to Jude winning the race.

Noah takes a photo of Jude.

Duncan is angry at Beth for what she did to him.

Retrieved from "https://totaldrama.fandom.com/wiki/Driving_Miss_Crazy?oldid=1589559"
Community content is available under CC-BY-SA unless otherwise noted.