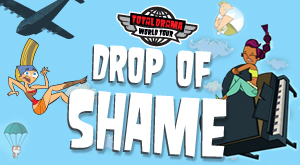 For the Drop of Shame that is featured in Total Drama World Tour itself, view this article.

Drop of Shame is a Total Drama World Tour game, produced by Cartoon Network. The game was released on June 14, 2010.

You control either Sierra or Ezekiel while using the arrow keys on the keyboard to evade or grab onto objects. The longer you stay in the air, the more points you get. There are light objects that the player should grab onto, including a black umbrella, a bunch of balloons tied together, and a single green balloon. These objects help slow down the player's descent, increasing their score. Then there are heavy objects that the player is supposed to avoid, including a piano, an anvil, and a bowling ball. These objects increase the speed of the player's descent.

Heavy objects fall from the top of the screen while light objects rise from the bottom of the screen. The bunch of balloons sometimes drift across the screen. Catching these raises the player a short distance, increasing their fall time even more and adding to the score. However, the balloons burst a few seconds after being grabbed.

Ezekiel's level is based on the events of Walk Like An Egyptian - Part 1 when Chris gets annoyed with him and throws him out of the plane. The player then begins to control the screaming Ezekiel, making him grab onto the light objects. If the player fails to do so, they will have a high chance of getting hit by a heavy object, which will bring their speedometer down. The more it goes down, the less chance the player has of winning the game. During the player's fall, squirrels, chipmunks, pandas, or other contestants might fall behind the player in the background. The player may also see Chef in a hot air balloon flying behind them. If the player lands safely, they will fall into a forest and be cheered on by animals, such as a bear, Sasquatchanakwa, a panda bear, a squirrel, a monkey, the baby seal, and the goat. However, if the player fails to land safely, they will land in a dirty dumpster. Two anvils will then fall on his back and legs, respectively.

Sierra and Chris are standing in the elimination area, and the former gleefully runs and jumps right out the door, failing first to take the parachute that Chris is holding in his hands. Once again, the player needs to make Sierra evade the heavy objects and grab onto the light objects. During the fall, squirrels, chipmunks, panda bears, or other Total Drama contestants appear in the background. If the player fails to complete the game correctly, Sierra will fall into the dumpster, and two anvils will land on her back and legs as well. However, if the player completes the game correctly, she will land safely on her feet and cheer in excitement. 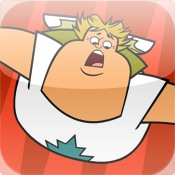 Cartoon Network's ad for the game. 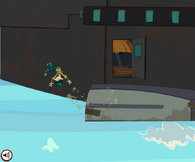 Chris throws Ezekiel out of the plane. 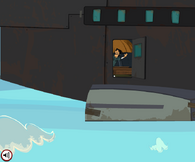 Chris waves at Ezekiel after he falls. 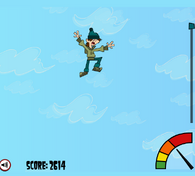 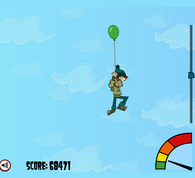 Ezekiel grabs onto a balloon. 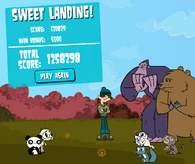 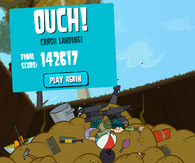 Ezekiel loses in the winners area in a glitch. 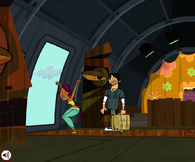 Sierra happily jumps out of the plane. 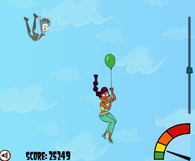 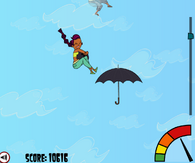 Sierra grabs onto an anvil. 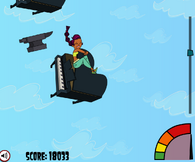 Sierra holds onto a piano. 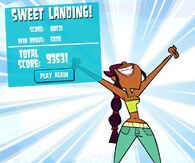 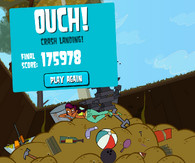 Retrieved from "https://totaldrama.fandom.com/wiki/Drop_of_Shame_(Cartoon_Network_game)?oldid=1587740"
Community content is available under CC-BY-SA unless otherwise noted.