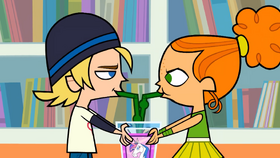 Two of the children dare each other to drink the teacher's favorite drink and go on an uncontrollable sugar rush. While two of the kids go out to buy the drink, the others must stop their hyperactive friends. While all this is happening, the teacher undergoes deprivation and turns the school upside down looking for his missing drink. Eventually, the teacher gets his drink back and is none the wiser with everything that has happened when it is gone until the naughty kid's latest escape plan ruins his drink, causing him to go berserk again.

The episode opens with the kids playing at the playground until Chef calls them for story time. The kids put their toys back into the box before returning to class. However, hiding inside the toy box is Duncan, who is planning yet another escape. Once the coast is clear, Duncan pulls out a cup of modeling clay and mixes it with rocket pop candy, before placing it on the gates to serve as a makeshift explosive to help him escape. Izzy approaches him and tries to play with it, but Duncan stops her as if the clay gets wet, the mixture would explode. Upon hearing Owen yelling "story", Izzy remembers that the next class is about to start and pulls Duncan back to the classroom with her. However, Chef isn't in the room so Owen leaves to find him. In his office, Chef is preparing to drink a cup of Rainbow Juice before Owen enters to remind him that class is about to start.

Back in the classroom, Courtney tells Noah to fold his legs properly or Chef would forgo the story telling. When Noah refuses, Courtney forcibly ties his legs into a knot. Chef enters the classroom and put his drink on a table after taking a slurp. Izzy is entranced by the drink and asks Chef about it, to which Chef explains it is his favorite drink: the Rainbow Pegasus Juice Mix or Rainbow Juice for short. When he's just about to start reading the story, Chef realizes he forgot his reading glasses and leaves the room to retrieve them and leaves Courtney in charge. Immediately after Chef leaves, trouble ensues, as Izzy takes a liking to the drink and starts rubbing it against her cheek. Jude then "Triple Dog Dares" her to drink it. In her imagination, Izzy is summoned to the Underworld where a talking Cerberus explains the rules: she can either perform the dare or stay in the Underworld with the McDermits, a boring couple who spend their days watching paint dry and grass grow. Izzy accepts the dare while also daring Jude to do the same thing. Jude also has the same hallucination and appears to have visited the place before, where he ends up accepting said dare.

The two of them each take a straw and drink the Rainbow Juice until it's empty. However, the high sugar content gives the two kids a sugar rush. To cover up the mess, all the other kids pile on top of them just as Chef returns. Chef notices his Rainbow Juice is missing, but believes he left it somewhere else and leaves again to find it. Izzy and Jude eventually overpower the other kids and begin flying around the classroom before escaping the room. In addition to this, the kids realize that if Chef doesn't get his daily Rainbow Juice he would go berserk, which is the reason their former classmate Nikki had moved away. Courtney and Duncan devise a plan to buy a replacement Rainbow Juice. They collect all the money the other kids have, before leaving the daycare to buy the drink. Meanwhile, the rest of the kids try to get Jude and Izzy under control.

Deprived of his precious drink, Chef turns the daycare inside-out looking for it, even ignoring an incoming call. Meanwhile, Duncan and Courtney reach the juice bar where Rainbow Pegasus Juice Mix is sold. The depressed barista pleads them to not order it, but they heed her no attention and order it anyway. Having acquired what they need, the kids return to the daycare via subway. Duncan attempts to use the opportunity to escape, but Courtney had anticipated this and handcuffs the two of them together. Back at the daycare, Owen and Noah find Jude's clothing scattered about the daycare, before finding the boy about to ride the slide naked. Since he slid down without any clothes, he gets a nasty case of friction burn on his butt and has to have it bandaged up before being pulled back on a toy wagon. The other kids aren't so lucky with Izzy, where she wraps several of them with toilet paper, before burning out her sugar rush and calming down.

Duncan and Courtney make it back in time and put the drink on a car outside the daycare, before getting Chef's attention so he can find it. As the two return to class, Izzy shows them a rabbit that she had made using Duncan's clay. To Duncan's horror, Izzy sprinkles water onto the clay rabbit, so Duncan quickly slaps the clay out of her hand...and right beneath Chef's leg. The clay explodes in Chef's face, but he reminisces that at least he still has his Rainbow Juice. Right on cue, the bottom of Chef's cup breaks and the contents spill out. Once again deprived of his drink, Chef's anger causes him to grow into a giant, taller than the building, where he goes berserk again.

Harold and Izzy have a staring contest without blinking, and Harold ends up losing.

Chef calls the kids in for class.

Duncan prepares his latest plan to escape the daycare.

Izzy pulls Duncan back to class with her before he can enact his plan.

Owen volunteers to look for Chef.

Chef preparing a cup of his favorite drink.

Piggy's got back, the book Chef is going to read the kids to.

Izzy is in love with Chef's drink.

The other kids' reaction to Jude's dare.

Izzy initially wanted to live in the Underworld.

Its Jude's turn to be Triple Dog Dared.

Izzy and Jude go on a wild sugar rush.

Harold explains that the two have took more than the daily amount of sugar needed for four year olds.

Courtney alerts the others that Chef is coming back...

...and the kids hide the hyperactive duo by piling on top of them.

What happened the last time Chef didn't get his daily Rainbow Juice.

Izzy and Jude are out of control.

The kids giving their money to Courtney for her to buy a new drink for Chef.

The kids divide themselves into two groups: one buys more Rainbow Juice, while the other stays and keeps Izzy and Jude under control.

Chef looking for his juice in his office.

Noah and Owen find Jude's shirt lying in the playground.

MacArthur working as a barista.

Having accomplished their mission, Duncan and Courtney return to the daycare via subway.

Jude prepares to slide down without any clothes on.

Owen and Noah witness Jude burning his "buns" from sliding.

Chef is reunited with his drink.

Duncan and Courtney return to class, much to the former's annoyance.

The kids smile sheepishly at Chef after he loses his drink again.

Retrieved from "https://totaldrama.fandom.com/wiki/Duck_Duck_Juice?oldid=1605045"
Community content is available under CC-BY-SA unless otherwise noted.