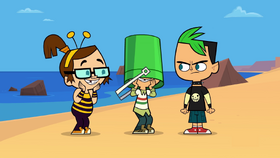 When the naughty kid escapes from the class nature walk, he learns that two others are still with him. He takes them on a day through the city and learns that child care is harder than it looks. Meanwhile, on the nature walk, the teacher gets stuck working at a restaurant after the kids need to use the bathroom.

Before taking off on a nature walk, Chef asks the kids if they need to go to the bathroom, the kids respond that they don't need to. Chef tells Duncan not to cause any issues like the last time they went on a nature walk, Duncan assures that it was nothing. Chef complains that Ducan makes his job harder than it already is but Duncan rebuttles by saying that his job is the easiest job in the world, much to Chef's dismay. When outside, Duncan cuts himself off from the walking rope so he can experience "Duncan Day", but notices that Cody and Beth were right behind him the whole time. He tries to get them back to Chef, but notices that they've already gone away, Beth and Cody get worried about being abandoned, so Duncan decides to let them join him on his plans. Later in the forest, Chef shows the kids the trees around them, while Jude complains about having to go to the bathroom, which causes Bridgette, Courtney and Lewshawna have to go to the bathroom as well, Chef rushes to an portapotty, which is occupied, and then takes them to a diner to use the bathroom. Before they enter, Flo tells them that the restrooms are for paying customers only and tells the kids that they must order food to use the bathroom. When the kids are done eating their food, it turns out they didn't need to go to the bathroom, much to Chef's dismay. Flo hands Chef a bill and realizes that he doesn't have his wallet, when he explains it to Flo she forces him to work of the meals by doing the dishes, while also making Courtney his new manager. TBC

Bridgette is having a tea party with her stuffed animals and is pouring hot water into their cups. Richard Swimmins is afraid that Bridgette might pour the hot water into his fish bowl but the camera pans out to show he too has a cup for Bridgette to pour in, much to his relief.

Chef asks the kids if any of them need to pee.

Duncan won't use props to make his points anymore.

"Hey, those animals at the petting zoo exploded all on their own."
- Duncan

Chef considers this to be the hardest job he ever had.

.. that he previously had.

Duncan wonders why is he tied to the walk rope.

Duncan says that he will cut the rope, so that his day can officially become "Duncan Day".

Duncan notices Beth and Cody behind him.

Duncan tells Beth and Cody that he will get them back to Chef.

Duncan, Beth and Cody get lost.

Cody thinks that with no adult around, he will have to live in the sewers again.

Duncan tells Cody that he will be the adult.

Beth and Cody's reaction to Duncan finding a wallet full of money.

Chef wants to teach the kids about nature.

Chef shows a tree looking old man to the kids.

Jude tells Chef that he has to go to the bathroom.

Chef tells Jude to keep it quiet, or else everyone will have to go.

Bridgette and Leshawna now have to go too.

"I don't actually need to go, but i'm always happy to try!"
- Courtney

Flo tells Chef that the washroom is for paying customers only.

The kids struggle to hold their pee in.

Bridgette orders a croissant, which she considers to be Italian food.

Courtney orders an egg white omelette, brown toast, no crust, and a fruit salad instead of home fries.

Duncan, Beth and Cody decide to go to the beach.

.. and Jude and Leshawna as they eat what they ordered.

Chef notices that his wallet is missing.

Jude tells Chef that he saw his wallet fall out of his pockets four blocks ago.

Chef starts washing dishes so that he can pay the bill.

Duncan decides to kick back and relax.

Cody is angry at Beth for getting sand in his pants.

Duncan decides to go get some snacks for Beth and Cody.

Beth and Cody tell Duncan that they want ice cream.

"Some day of freedom! I'm supposed to be chilling at the beach, not serving a couple of nagging kids!"
- Duncan

Duncan after he finds out how much he has to pay.

Duncan gets tied to the hang glider.

Beth and Cody decide to hit more stuff on their way.

"This is supposed to be "Duncan Day"!"
- Duncan

Thanks to Beth and Cody, Duncan keeps hitting more and more stuff.

Duncan tells Beth and Cody to stop spending so much of his cash..

.. but he changes his mind after he looks at them.

Beth and Cody tell Duncan that they want to go to the zoo.

Beth and Cody's reaction to them going to the zoo.

Beth and Cody thank Duncan for buying each of them something at the gift shop.

Beth accidentally drops her doll into the aligator pit.

Beth tells Duncan that if he won't get her doll back, she will tell Chef everything.

Chef takes the kids and runs out of the restaurant.

Jude tells Chef that he has to go to the bathroom again.

Chef starts talking about how bad his day was.

Duncan gets out of the aligator pit.

Duncan tells Beth and Cody that they're going back to the school.

Duncan thinks being in charge of Beth and Cody is the worst job ever.

Duncan now thinks looking after kids is the worst.

Retrieved from "https://totaldrama.fandom.com/wiki/Duncan_Disorderly?oldid=1589552"
Community content is available under CC-BY-SA unless otherwise noted.