The Father & Son with Junior

Little Bull on the Prairie

Neil Crone
Dwayne Sr. was a Total Drama Presents: The Ridonculous Race contestant as a member of The Father & Son with Junior.

Dwayne is a father with a great family and a son, who he believes is growing up too fast. He signed both of them up for the show as a great way to spend some father-son bonding time, show him the world, and maybe share a few laughs. Dwayne is blessed in the good intentions department, but completely lacking in street smarts, along with being hopelessly ignorant about the world outside of North American life. Nevertheless, Dwayne cares for his son more than anything else and will go to any length to ensure Junior's safety and happiness. Over the course of the race, Dwayne learns more and more about his son, accepting him as Junior accepts him.

Dwayne is introduced with his son, Dwayne Junior, in None Down, Eighteen to Go - Part 1, where he hopes to spend time with his son and see the world. Father and Son are the first pair to reach the Don Box, and find out that the challenge is an "Either/Or". In the challenge, he and his son initially try to take the elevator, but he hits all the buttons by accident, forcing them and several other teams already inside the elevator with them to take the stairs instead except for the Fashion Bloggers. Dwayne and Junior end up on the first flight of Morocco.

In None Down, Eighteen to Go - Part 2, the two have trouble picking spices, causing them to lose their lead. Panicking, they go with Dwayne's strategy and pick 5 spices randomly. They fall even further behind after their camel collapses. Realizing that they are in last place, Dwayne downs the entire bowl of stew, but suffers from temporary blindness due to the spice, forcing his son to guide him to the finish. The two finish second last place, sending the LARPers home.

The two of them ride a moped to their next stop in French is an Eiffel Language, but are delayed when Tom tosses the carpet he bought in Morocco, blocking their vision, prompting them to crash.  He tells the Fashion Bloggers this, but he and his son back away slowly when the Bloggers laugh nervously. Dwayne is drawn by his son in the caricature challenge and they manage to navigate through the catacombs and advance to the next leg as they finish in fifth place.

In Mediterranean Homesick Blues, Dwayne interrupts with Junior's interaction with Carrie when Junior tries to impress her. At first, he shakes with Carrie's hand, much to Junior's annoyance. He then introduces themselves to her, while unintentionally humiliates his son. He makes up for it by getting the Travel Tip from the fin of the shark, which impresses his son. He helps make the sand castle and despite being rejected at first, their second castle is approved the second time. They struggle to start a boat but thanks to Junior, make it first at the Carpet of Completion but incurred a twenty minutes penalty as Dwayne read the Travel Tip to Junior prematurely before reaching shore. Despite the penalty and a failed attempt from Dwayne to bribe Don, the two finish fourth place.

Dwayne struggled throughout Bjorken Telephone. While claiming to have a good memory, he failed repeatedly to recite the Icelandic sentence. Eventually, Junior manages to say it correctly and they are one of the last pairs to board the helicopter. During the "Either/Or" challenge, the two decide to mine for fossils, and Dwayne is nearly struck by a pickaxe after slipping on ice, causing the Daughter and Mom to barf. Before heading out of the cave, they manage to find the fossil the Vegans lost and take it to the finish.

At the Chill Zone, the Vegans reveal the fossil belongs to them, but Don sends the Vegans back despite Dwayne's attempt to give them their fossil back, allowing Dwayne and Junior to finish eighth place. This incurs the wrath of Laurie on Dwayne.

Dwayne's luck changes for the better in Brazilian Pain Forest. The two are able to get the Travel Tip from the mitten filled with ants, and make the headdress and tail for the local judge. They encounter Jacques and Josee as they get a tip from a coconut, but after Josee tackles him, Dwayne hands the tip off to Junior, telling him to save himself as Jacques chases him. Despite this incident, the two finish sixth in this leg of the race.

Dwayne and his son continue to progress through A Tisket, a Casket, I'm Gonna Blow a Gasket. He does tell the cameras that he does want his son to be able to think for himself, but when Junior asks for ridiculous stuff, he grounds him. Since Junior is the one who got bitten by the bullet ants last episode, Dwayne had to be placed in a coffin while Junior pushed him into an open grave. The two finish in sixth place.

In Hawaiian Honeyruin, Dwayne is seen driving the donkey cart to Hawaii, accompanied by the Stepbrothers and Mom and Daughter teams. He talks with Taylor and Kelly, remarking how nice it is to see another parent and child competing, and gets along well with her. In the Botch or Watch, he watches Junior dive for the wedding rings. At the walk over hot coals, he offers to do it but due to Junior not wanting to wear the Hawaiian skirt, he is carried by his son. The two finish 6th for the third time in a row.

Dwayne and Junior are first on the second plane in Hello and Dubai, where he gets the idea to form an alliance with Kelly and Taylor, an idea that Junior promptly rejects. While on the plane, Kelly and Dwayne talk about their children. Dwayne eventually angers Kelly after he words his advice wrong and offends her and Taylor in the process and gets drenched in water. The two try the "serve" challenge, but switch to cleaning the windows and manage to finish in sixth place, once again.

Dwayne has a rough time in New Beijinging. He and Junior were able to skydive into the Bird's Nest Stadium with no trouble but had problems with the kebab as he tried to grab a scorpion only to be stung repeatedly and be delusional due to the venom. He was driving the rickshaw and despite all the issues, they finish next to last.

In the following episode, Dwayne is fully recovered from venom, although he remains silent for the rest of the episode. He and Junior are seen in the sauna with the Stepbrothers. Later in the next challenge, they make it in sixth.

In My Way or Zimbabwe, Dwayne still overprotective against his son despite Junior's protests. However, during the challenge, he put several life jackets on Junior for protective after seeing the Rockers falling from the falls. He and Junior got separated from each other as he asked the Rockers if they have seen his son, they didn't but they think his son has been eaten by a lion, with Dwayne refused to believe this so he climbs up to where they last saw each other. He later encounters the Ice Dancers, who don't care about the whereabout of his son. He unknowingly offends them by saying medals aren't important and he was almost run over by them. Dwayne then gets chased by a rhino throughout the challenges until he made to the Chill Zone. Dwayne is happily reunited with Junior and apologizes for being unable to help out because he was trying to find him until Junior reveals that he already has a photo and gives it to Don. They make it in second to last. They are then shown in the interview, where he continues hugging his son tightly and saying that they have to make sure that his wife never sees this episode.

Their father and son relationship becomes slightly strained in Shawshank Ridonc-tion. When they find out that the team that gets first place gets the opportunity to call somebody from home, Junior would like to call his mother while Dwayne would like to order a pizza. When Dwayne sees a police officer chain Junior in handcuffs, he asks him to leave his son alone until he got knocked in the head by another police officer. They placed in third. In Down and Outback, they are seen trying to collect ten rabbits as Dwayne found a different way to collect rabbits. They placed in fourth.

Dwayne still has a hard time reconnecting with his son in Maori or Less. During the train ride, he was given very bad advice by Brody abd starts trying to act "cool." During the challenge they choose the traditional Maori dance, however Dwayne doesn't follow the dance correctly, trying to prove he is "cool" until Junior snaps him out of it. They passed the dance and are placed in seventh place. After that, in an attempt to impress his son, Dwayne gets a tattoo, only for Junior to reveal that it was a women's tattoo much to his embarrassment.

Dwayne and Junior have a hard time getting the taxi due in his tattoo seen in Little Bull on the Prairie. In the second flight, Dwayne and Junior watch Total Drama: Pahkitew Island, where Dwayne inadvertently jinxes them, causing their flight to be delayed. After finishing eating an entire pot of pork and beans and moved to the next part of the challenge. Dwayne is upset about letting his son down, but Junior gives him a pep talk that allows his dad to ride the bull successfully. Dwayne and Junior come in last, but believe it’s a non-elimination round before being corrected by Don. As they leave, Junior expresses pride in his father and thanks him for everything. The two embrace before walking off into the sunset to marathon the rest of Pahkitew Island, having strengthened their emotional bond.

They are seen again in A Million Ways to Lose a Million Dollars where Dwayne's tattoo been fully removed. He and the other eliminated teams applaud as the final two teams race to the Chill Zone. At the end of the episode, he joins the rest of the cast for a final group shot.

Dwayne looking at something.

Dwayne with a set of cards in his hand.

Dwayne with a tattoo.

Dwayne with his son 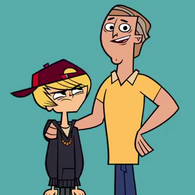 Dwayne's rotation with a tattoo on his chin.

Father and Son are introduced.

Father and Son read a tip.

Dwayne and Junior are second last team to arrive to the Chill Zone.

Dwayne and Junior are hit by The Fashion Bloggers' Carpet before crashing.

Father and Son after crashing.

Dwayne gets a tip from sharks.

Dwayne complains about their castle not being good enough.

Dwayne and Junior manage to get the tip.

Junior helps Dwayne with the boat.

Dwayne and Junior come in first place, but get penalized.

Dwayne and Junior place fourth as their penalty ends.

Dwayne wants to keep the fossil for a present for his wife.

Dwayne drops the fossil, causing it to break.

Dwayne and Junior finish the challenge in Brazil.

Dwayne struggles on the balance beam.

Dwayne and Junior cleaning the windows.

Dwayne gets stung by scorpions.

Dwayne carrying Junior on the rickshaw.

Father and Son in the Sauna

Dwayne hugs Junior after finding him.

Dwayne becomes depressed as his son refuses to hang out with him.

Dwayne and Junior enjoy their time on the plane, watching an episode of Total Drama: Pahkitew Island.

Dwayne gets motivated by Junior...

...and completes the challenge.

Dwayne and Junior make their departure.

Retrieved from "https://totaldrama.fandom.com/wiki/Dwayne?oldid=1605864"
Community content is available under CC-BY-SA unless otherwise noted.