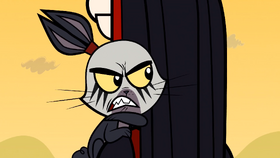 In an All-In, one member of the team must eat a pepper while the other jumps from a cliff to retrieve a tip; The spiciness of the pepper eaten determines how high the jump is
Then, teams must ride burros, two miles south to the Chill Zone

The seven teams travel to Mexico to experience hot peppers, cliff diving and burro riding. Someone becomes obsessed in proving themselves to another, even while they end up bonding instead with another who has troubles with their partner. Meanwhile, a duo tired of dealing with a tough team abduct their weak point; but while it is able to escape from their clutches in the end, its return isn't enough to prevent their partners from being eliminated.

The teams must now make their way to Mexico via the "chicken bus". While on the bus, the Surfer Dudes indulge in chimichangas and burritos from a bus station, forcing them to take a bathroom break when they get off the bus, falling behind the other teams. The Ice Dancers try to find a way to sabotage the Goths, before settling on Loki, with Jacques managing to kidnap the rabbit from a distracted Ennui. The teams must now take part in an All-In, in which one of the team members must eat a hot pepper. Based on which pepper they choose: mild, hot, or spicy, they must wave the corresponding flag for their team member, who will then jump from a corresponding ledge of the cliff that is of a proportional height to the hotness, and search in the lake for a canteen full of milk and the next Travel Tip. If their partner chooses to eat the mild pepper, they must jump off the highest cliff,

if their partner chooses to eat the hot pepper, they jump off the medium-sized cliff, and if their partner eats the spiciest pepper, they jump off the shortest cliff. Devin struggles to eat the spiciest pepper, while MacArthur finishes hers and is overcome by the heat. Stephanie eats the mildest pepper to spite Ryan, forcing him to climb to the highest cliff. As more teams finish the eating part of the challenge, Devin continuously tries and fails to eat the spicier peppers, forcing Carrie to climb up to the highest ledge. Although Crimson manages to eat the spiciest pepper with ease, the Goths put off the challenge to search for Loki after Ennui notices that he's missing. The teams must now compete in another All In, which involves riding burros two miles south to the next Chill Zone. Ryan puts off jumping in fear of death with Carrie promising to jump with him as soon as Devin eats the pepper. Carrie helps Ryan by jumping with each other by holding hands. Devin becomes angry after noticing Carrie and Ryan holding hands during the fall, and accidentally rubs pepper juice into his eyes, causing him to become temporarily blind.

While most of the teams are riding the burros, the Goths are still in search of Loki while Geoff has to deal with stomach problems. Loki escapes from the grasps of the Ice Dancers, scaring their burros into running away, giving them a ten-minute penalty when they reach the Chill Zone. MacArthur carries her burro to the finish line after it falls asleep, securing first place for the Police Cadets. While on the way to the Chill Zone, Ryan gives Carrie a hand with Devin as he is unable to see, which makes Carrie put in a good word for him with Stephanie. The Goths and Surfers race by burro to the Chill Zone with the Goths ultimately coming in last place, causing their elimination. While they don't think much of their loss, the Ice Dancers are satisfied until Loki makes a cut throat gesture at them, much to their horror. As Don signs off the episode, the Goths admit that they have enjoyed visiting some of the locations and wish that the Ice Dancers get what they deserve.

Josee tells Jacques that he's supposed to support the pretty one, meaning her.

Devin admits that he's in love with Carrie.

Kitty's selfie with a chicken.

Brody drools over his last burrito.

Brody asks MacArthur if she would like the burrito.

Loki gets kidnapped by Jacques.

Contestants must jump off a cliff into the lake depending on the pepper eaten.

Devin puts his head into the water to cool off.

MacArthur taunts Devin about not being a man.

MacArthur grabs a handful of peppers.

After eating them, her face turns red.

MacArthur after eating the spicy pepper.

...and Devin's reaction to eating the pepper.

Devin is having some trouble with the challenge.

Ennui notices that Loki is missing.

Emma got some milk for Kitty

Ennui got some milk for Crimson.

Crimson notices that something is wrong with Ennui.

The Goths decide to search for Loki.

Carrie and Ryan jump together.

Devin is now jealous of Ryan.

...so the Ice Dancers overstep them.

The Ice Dancers are penalized.

Loki returns to its owners.

MacArthur carries her burro to the Chill Zone.

MacArthur is triumphant over her rivals, the Ice Dancers.

The Ice Dancers come in second.

The Haters and Best Friends are tied for fourth place.

Goths and Surfers in a race for the second last place.

The Surfers come in fifth.

The Goths are the last team to reach the Chill Zone and are eliminated.

The Ice Dancers are happy they succeeded in eliminating the Goths.

Retrieved from "https://totaldrama.fandom.com/wiki/El_Bunny_Supremo?oldid=1631115"
Community content is available under CC-BY-SA unless otherwise noted.