Chris, Max, Sugar (one-sided on her side}

Sunday Muse
Ella was a contestant on Total Drama: Pahkitew Island as a member of the Waneyihtam Maskwak.

Ella is a songbird with a personality as angelic as her singing voice. She is highly enthusiastic and enjoys expressing her emotions through music and dance, even when the time isn't appropriate. Even Chris, known for being sadistic and cruel, admits that he thinks Ella is a sweet girl in This Is The Pits!

Her voice is hypnotic to the fauna of Pahkitew Island; they love her and she loves them right back. It seems the only things that break her happiness are the mistreatment of her animal friends and being rejected. Though she has befriended most of her peers, Ella can be oblivious when someone dislikes her. Despite this, she has proven that she genuinely wants everyone around her to be happy and will do what it takes to brighten their moods.

As soon as Ella is introduced, she is shown to be a very kindhearted girl, who has a love for singing. Despite her peaceful nature, she still develops some enemies in the form of Sugar and Chris, who hate her for her singing and her sunny disposition. Ella is also shown to have a close connection with the many animals on the island, who eagerly come to her aid, such as a bird carrying her to the ground upon discovering she doesn't have a parachute. Over time, her one-sided conflict with Sugar escalates, with Sugar believing her "princess" persona to be fake, and thinks Ella is trying to upstage her.

Ella's singing also becomes an increased annoyance to her team-mates, where it is often a constant hindrance in challenges. Such instances include her taking too long to complete her part of the challenge or giving away her position to the other team. Her team get more fed-up with her singing over time, and try to get her to stop without hurting her feelings. One example of this is in Twinning Isn't Everything, where Shawn gets rid of Ella by suggesting she sings to the other team instead, as a sign of "friendly competition".

By I Love You, I Love You Knots, her relationship with Sugar has yet to improve, although she remains completely oblivious to this fact. Ella continues trying to reach out to Sugar, but every one of her attempts end up getting rejected, and Sugar only grows to hate her more. At one point in the "Truth or Scare" challenge, Ella is given a truth and states that; the thing she would change about herself would be whatever it took for her and Sugar to become friends. However this only enrages Sugar further and leads her to try and attack Ella, while Chris believes it's a lie and shocks the team as punishment. Ultimately, the winner of the challenge comes down to a tiebreaker, with Ella and Rodney competing against each other. Ella manages to untie her bag take out the remote first, but is unable to bring herself to shock the other team, so Clucky takes it from her and shocks them herself.

Ella persistently continues her attempts to befriend Sugar in A Blast from the Past. Now aware that Sugar isn't fond of her singing, she tries a different approach in the form of a poem, but still has little success. During the challenge when it's Ella's turn to collect a jousting stick, she faces off against Max, who had heeded Scarlett's idea to electrify his stick. When the two cross paths, Max uses his stick to shock Ella, causing her to fall into the lake. She is pulled out of the water by Dave, who puts her shoe back on her foot in a Cinderella-like fashion. This "fairytale moment" leads Ella to become attracted to him, and she begins calling him "her prince". In gratitude of Dave's deed, she promises to win a point for their team, and is faced against Max again. However this time their encounter is interrupted by Scuba Bear, who knocks Max into the water. Before Scuba Bear can attack Ella, she sings to him, calming him down. This infuriates Chris, who throws his cup at Scuba Bear and orders it to attack Ella. However this only leads the bear to turn its attention on Chris instead. With this, Ella succeeds in obtaining a point, and in the end their team emerges victorious. At the end of the episode, Chris is finally fed up with her singing and declares that she will be disqualified should she ever sing again.

Ella's new interest in Dave persists in Mo Monkey Mo Problems, and she goes looking for him prior to the challenge. She comes across Dave, who had prepared a romantic picnic, and believes it to be for her. However, she is heartbroken to hear it was actually intended for Sky. She later approaches Sky and informs her of Dave's true feelings, who is both happy about the news, but still tries to comfort the distraught Ella. Later, during the challenge, Dave gets captured by a bear, and everyone tries to coax Ella into singing to calm it down. However Ella is initially hesitant, due to the ban that Chris imposed, but after much encouragement (especially from Sugar) she complies. She continues to use her singing to bring the bear to Chris, allowing their team to attain the coin (the bear had eaten), and win the challenge. However it's revealed that Sugar ratted Ella out for singing, and Chris disqualifies her, despite their team's victory. However Ella isn't dismayed by her elimination, as it meant she was free to sing again. She performs one final song before she departs, where she farewells all her fellow contestants. A flock of birds then pick her up and lower her into the Cannon of Shame, where she is fired off the island.

Ella starts by explaining how she loved Total Drama World Tour and how she memorized every song and performed them at a local mall in a one-person flash mob. She goes on to say that the security guard told her she has a beautiful voice and that she was banned from the mall. She sings the words "please pick me" which angers one of her neighbors because of the thin walls. She ends the audition by apologizing to her neighbor, Mr. McGillis. 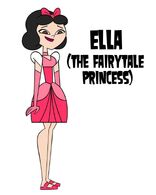 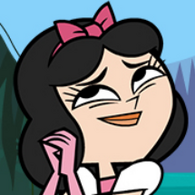 Ella sings in the opening theme...

Ella and Leonard creep Dave out.

Ella singing on her debut appearance.

Ella and Topher are excited to start the season.

Ella using the confessional with her animal friends.

Ella sings in I Love You, Grease Pig!

Ella is irate at Chris for frightening the pig.

Ella offers the leash to Dave.

Sugar shoves a pear into Ella's mouth to stop her from singing.

Ella falls to the ground after Sugar pushes her.

Ella manages to untie her bag containing the remote for the Pimâpotew Kinosewak shock collars.

Ella refuses to shock the other team in I Love You, I Love You Knots.

Ella receives advice on how to make Sugar like her back from Sky.

Ella gets ready for her part of the challenge.

Ella is electrocuted by Max.

Dave helps Ella out of the water.

...however, she sings to make it calm.

Ella once again with animal friends in the confessional.

Ella becomes excited after she heard what Shawn said.

Ella mistakes Dave's picnic for Sky to be for her.

Ella heartbroken after she found out Dave likes Sky more then her.

Sugar tries to get Ella to sing.

Ella sings to save Dave from a bear.

Ella uses her singing to bring the bear to Chris.

...and takes the Cannon of Shame and is eliminated in Mo Monkey Mo Problems.

Ella's cameo in Lies, Cries and One Big Prize.

Retrieved from "https://totaldrama.fandom.com/wiki/Ella?oldid=1600139"
Community content is available under CC-BY-SA unless otherwise noted.