The Geniuses with Mary

Emilie-Claire Barlow
Ellody was a Total Drama Presents: The Ridonculous Race contestant as a member of The Geniuses with Mary.

Ellody is a genius and incredibly aware that she is a major geek, but really doesn't know how to be any other way. She is also a perfectionist; if something is not perfect, then she will continue to put effort into it, even if it hinders her. Even when her partner decides to "wing it", she expresses concern, exclaiming that she never "wings it". She is miles above the other contestants in I.Q. thus her and Mary's plan of attack is simple: outwit the competition. Having spent all her time deep in study instead of wasting energy on "useless" pursuits like popularity and boyfriends, she feels well equipped to kick proverbial butt.

Ellody and Mary first met at an Engineering Student Potluck dinner where they both brought "pie chart" pies and bonded fast. The both of them are not socially active in their school, as they rather spend their time memorizing the roads of urban areas than going to parties, dates or joining in other school extracurricular activities. As a result, they are not popular among their peers though they didn't seem to mind.

Ellody and Mary joined the Race in order to raise funds for the Science Community, notably in Astro Physics. Though they do not fare well in the first challenge, they manage to get a seat at the second flight. Using their high intelligence, they are able to figure out the correct spices and manage to reach seventh place. They also do not face many difficulties in French is an Eiffel Language and reach ninth place.

Unfortunately, their high intelligence also leads to their downfall as shown in Mediterranean Homesick Blues. Before building their sandcastle in the challenge, they draw a complicated plan in the sand, claiming that building a sandcastle is not child's play. After their data is washed off by a wave, Ellody becomes distraught and the two are forced to build their sandcastle without any reference or plan. As a result, the two fall behind all the other teams and failed to complete their sandcastle by the time the final team had reached the Chill Zone. Don arrives in a helicopter to announce that the Geniuses are eliminated. They accept their defeat and walk off, cracking a joke on how "science isn't everything". 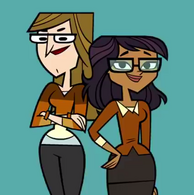 Ellody is introduced alongside her partner.

Ellody glares at Tom for holding her and the others up.

Ellody and Mary after being "splattered" by bugs.

Ellody sits with Mary on the second flight to Morocco.

Ellody determines the importance of the spices...

...and easily picks them out along with Laurie.

Ellody has a friendly conversation with Geoff.

Ellody draws Mary during the Botch or Watch.

Ellody tells the taxi driver where to go, along with Mary.

Ellody begins to panic after their blueprints are destroyed.

Ellody thinking about something while making the sandcastle.

The Geniuses make their departure.

Retrieved from "https://totaldrama.fandom.com/wiki/Ellody?oldid=1575689"
Community content is available under CC-BY-SA unless otherwise noted.