The Goths with Crimson

Carter Hayden
Ennui was a Total Drama Presents: The Ridonculous Race contestant as a member of The Goths with Crimson.

Ennui is a dark, brooding soul who has been described to have the emotional range of a stone gargoyle. It is unclear as to why he and his girlfriend Crimson are participating in the show, or if they're even enjoying the experience. Despite his dark and creepy appearance, Ennui actually has an animal magnetism that affects cute and fluffy animals like rabbits, much to his and Crimson's initial disgust. However, he soon adopts one and the Goths become emotionally bonded with it. Ennui gravitates towards looking alone and avoids forming alliances. However, he never shows any malice towards other contestants, with the exception of the Ice Dancers, and he is willing to accept Crimson for who she is, overlooking her ungothed appearance.

Ennui makes his debut in None Down, Eighteen to Go - Part 1, along with his partner, Crimson. They remain completely silent for the first two episodes, even when spoken to, and ends up creeping out Don with their lack of emotion. They end up placing 14th in the first challenge.

Ennui speaks for the first time in French is an Eiffel Language, where he draws a caricature of Crimson and asks whether she wants to look alive in the picture. Later on the Goths come across Jay and Mickey who are terrified by the catacombs, however Ennui comments how he thinks the catacombs could be opened as an amusement park or a kid's camp. The Goths end up finishing in 13th place.

They also proceed through the challenges in Mediterranean Homesick Blues, with little trouble and conversation, ending up in eighth place. In Bjorken Telephone, the Goths preform exceptionally well. Their fluency in Icelandic gives them an advantage in reciting the Icelandic phrase, and their strong stomachs allow them to consume the Icelandic feast with ease and end up finishing first. Don is still unsuccessful in his many attempts to get them to show excitement over winning, though in an Interview, Ennui states in an emotionless tone that he was so excited he could pee himself.

Both Ennui and Crimson are pleased to find out the country they will be visiting in A Tisket, a Casket, I'm Gonna Blow a Gasket, is Romania. They take their time to enjoy seeing the hometown of Vlad the Impaler, who was the Goth king according to them. During the coffin pushing challenge, Crimson swaps places with Ennui so that he wouldn't miss out on the opportunity of experiencing one while he's alive, despite knowing they will likely be penalized. The Goths end up performing well in the challenge, though Don does end up giving them a penalty. However they don't mind, and feel it was worth the experience. The Goths are disappointed in having to leave Romania in Hawaiian Honeyruin. They lose time during the All-In due to Crimson refusing to wear the traditional dress until she has colored it black with a marker, though they still end up in tenth place. They continue on in New Beijinging, where Crimson frees the bats during the eating challenge believing that they were beautiful creatures who were not to be eaten.

The Goths seem to be excited about getting to visit Finland in I Love Ridonc & Roll. They hitch a ride with the other teams on their way to the airport after Spud offers. While in the sauna, their makeup starts to melt and comes off after they are accidentally pushed into the river by Kitty. They panic due to not having looked at one another without makeup and cannot accept each other. Due to their appearance, Don does not initially recognize them at first but allows them to compete after seeing their camera crew. Ennui tries to perform an air-guitar but the audience dislikes his performance which saddens him. Not knowing what to do, both of them decide to quit and try to accept each other for who they are but change their minds after seeing Gothic clothes in a costume shop. Their relationship also grows stronger when they see each other ungoth and they learn to accept each other for who they are. Ennui has no trouble at all pleasing the audience this time around with Crimson and save themselves from elimination. He also comments that he has never felt closer to Crimson than he does right now. In My Way or Zimbabwe, they are one of the last teams to complete the challenge.After breaking out of prison and building a raft in Shawshank Ridonc-tion, the Goths place seventh.

The Goths have no trouble catching bunnies in Down and Outback, due to Ennui's affinity for animals, causing all of them to be attracted towards him. While Ennui is disgusted by the displays of affection and is glad when the challenge finishes, they notice how the rabbits terrorize Australia with their population. They find a black rabbit and decide to adopt it as a pet, naming it Loki. During Maori or Less, they choose the bungee jumping challenge and do so without showing any emotion whatsoever.

In Little Bull on the Prairie, Crimson has no trouble at all riding the mechanical bull due to having experience riding bulls while staying at her grandmother's house one summer although she does not seem to want to talk about it. Although the Goths are the first team to complete the challenge, they place fourth due to getting distracted by a skull they found on their way to the Chill Zone.

Both Ennui and Crimson seem intrigued by Devin's behavior due to his recent breakup in Lord of the Ring Toss and ponder whether or not they should form an alliance with the best friends but end up declining the offer because of Carrie. Ennui has no trouble at all ringing a narwhal, but later admits in the confessional that it was pure dumb luck. The Goths have trouble with the igloo building challenge, as the blocks keep melting into snow. This leads Ennui to suggest they simply mold the snow into an igloo instead. The idea works, and they come in sixth place.

The Goths seem to have trouble trying to get venom from the Komodo dragons in Got Venom because of wearing deodorant that had been extracted by animals from a species which frightens them. The Ice Dancers try to sabotage them by making them believe that it is not safe for Loki to be on challenge grounds but the Goths carry on after Ennui communicates with Loki who wants them to continue. Loki is then chased by a Komodo dragon up a tree who drools into a bucket the Goths had placed to collect venom. After finding a branded carpet, they end up in first place.

The Goths continue their winning streak in Dude Buggies by impressing the judge by performing an improvised magic trick which involved Loki being pulled out of the lion by Ennui. The judge later comments that it was the greatest magic trick he had ever seen. After having a footrace with the daters, they come in first place. This angers Josee who continuously tried to sabotage their chances of winning. In El Bunny Supremo, the Ice Dancers sabotage the Goths by kidnapping Loki. It is only during the cliff dive that Ennui notices Loki is missing and puts off the challenge in order to find him. Crimson tries to calm him down after he panics due to having lost a pet in the past. The Goths continue the challenge after Loki is found but due to having taken a lot of time end up in last place.

The Goths have an interview in A Million Ways to Lose a Million Dollars, in which they both express happiness, which is described as "infectious" by Ennui, that the Ice Dancers got eliminated. He and Crimson later join the rest of the cast in a final group shot, with Loki in his shirt.

Ennui noticing that Loki is missing.

Ennui in his winter outfit.

"Degothed" Ennui with a paper bag on his head. 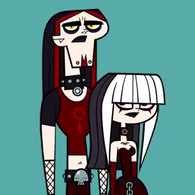 "Degothed" Ennui with a paper bag on his head.

The LARPers try to get the Goths into an alliance...

... but they simply walk away.

Ennui drawing a caricature of Crimson.

The Goths accidentally scare the Twins.

Crimson and Ennui in the Parisian catacombs.

The Goths eating their feast.

The Goths win the challenge.

Ennui settles Crimson down after she almost gets "color" in her face.

Ennui admires a picture of Vlad the Impaler.

The Goths get penalized.

After describing their happiness in Transylvania, Ennui and Crimson genuinely smile.

The Goths landing by parachute.

The Goths release some bats, not wanting them to be eaten.

The Goths' makeup begins to melt off in the sauna.

Kitty accidentally knocks the Goths into the river...

The Goths fall into the water.

The Goths scream upon seeing their real appearances.

Unable to look at each other, both Crimson and Ennui cover their faces with paper bags.

Ennui, without his makeup, smiling at Crimson.

Ennui and Crimson in the confessional with their new look.

Ennui telling the Ice Dancers about their curse.

Ennui and Crimson's selfie while hurtling down Victoria Falls.

Ennui and Crimson's second selfie with the (newly gothed) rhino.

Josee tries to convince Ennui to lend her some of his makeup...

...to which he reluctantly obliges.

Ennui is repulsed by the bunnies jumping into his sack.

Ennui wonders if he and Crimson should hang out with Devin more.

Josee throws garlic at the Goths believing they're vampires.

After struggling with the challenge, Ennui and Crimson stare menacingly into the magician's eyes.

Ennui and Crimson wonder whether they completed the challenge correctly.

The Goths come in first for the second time in a row.

Ennui notices that Loki has disappeared.

Ennui, Crimson, and Loki commentating on the finale.

Retrieved from "https://totaldrama.fandom.com/wiki/Ennui?oldid=1577177"
Community content is available under CC-BY-SA unless otherwise noted.