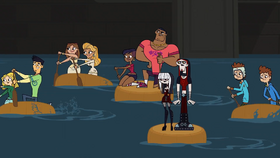 Draw a caricature of your partner
Navigate through the Parisian catacombs to find cheese wheels
Paddle the cheese wheels on the Seine river, and carry them to the Louvre

The seventeen remaining teams head to Paris, where they must partake in an art competition and traverse the catacombs before racing to a final stop at the Louvre. The rivalry between two teams further heats up while two others rather concentrate on having fun their own way while someone ends up regretting the previous challenge as their stomach nearly ruins things for them and their partner. Two rivals hope to use others misfortunes to their own advantage but ultimately don't cross the line in time, sending them sailing.

The episode begins at the Moroccan Chill Zone, where the contestants must race on mopeds to an airport, departing in the order in which they placed in the previous episode. Upon reaching the airport, the contestants must then book a flight to Paris, where their next challenge lies. The Police Cadets try to get an early lead by overtaking the Best Friends, only to be overtaken themselves by the Ice Dancers. MacArthur admits that the Ice Dancers had started getting on her nerves due to her being unable to comprehend their incessant smiling. While Father and Son do well at first, they fall behind after the Fashion Bloggers throw a carpet at them, due to the weight of the carpet slowing them down. Meanwhile, the Vegans decide to pedal their moped instead, not wanting to waste release fuel that would pollute the environment.

Having booked their flights, the first and second planes depart for Paris. After landing, the teams must take a cab to the Eiffel Tower. Although the Ice Dancers are initially excited due to being in the lead, this does not last long when they receive competition from the Police Cadets, who crash into their car in order to slow them down. The Police Cadets overtake the Ice Dancers and get to their tip first. The teams must now compete in a "Botch or Watch" in which the person who didn't eat the stew has to draw a caricature of their partner, which must be approved by an artist to get their next Tip. The Surfers Dudes are the first to complete their caricature and receive their next Tip. The next part of the challenge involves navigating through the catacombs underneath Paris and find a block of Roquefort cheese. The teams must then ride down the river with the cheese to get to their next Chill Zone. While some teams are finishing up their drawings, the Fashion Bloggers get a flat tire and decide to use the moment to do some late night shopping. Meanwhile, the Tennis Rivals are far behind the other contestants, due to their cab driver not knowing where they wanted to go after they fell asleep. Kitty becomes unhappy with Emma's mean attitude, but to her relief, she does allow Kitty to do the challenge by herself. As more teams take off into the catacombs, the Police Cadets get an early lead due to MacArthur's exceptional sense of smell.

The Reality TV Pros have to take a small detour, due to Owen needing to use the bathroom, while some of the other teams begin to lose their sense of direction. By this stage, the Vegans and Tennis Rivals have finally completed their caricatures. The Tennis Rivals decide to follow the Vegans, believing they know where the cheese is although they are misled by Owen's stink. The Ice Dancers and Police Cadets are the first ones to find the cheese, and fiercely compete against each other to reach the finish line before the other. The Ice Dancers haste to get ahead causes them to forget their oars, so they paddle using their feet. Despite their efforts, the Cadets come in first place, much to Josee's anger. A few of the teams encounter trouble while riding their rafts, with the Daters losing their oars, while the Fashion Bloggers try to balance their shopping bags while riding on the cheese.

Although the Reality TV Pros manage to arrive at the Chill Zone before a few of the other teams, Don, who refers to the team as "Noah and his Ark", gives them a twenty-minute penalty due to them not riding the cheese raft, as Owen ate it. As the final few teams arrive, the Tennis Rivals are the only ones left, due to taking excessively long when they decide to carry their cheese rather than roll it. They arrive at the Chill Zone just as the Reality Pros' penalty runs out, leading both teams to make a dive onto the Chill Zone. While it appears to be a tie, Don points out that Gerry's foot is not on the carpet, and comes to the decision that the Tennis Rivals are eliminated. After Gerry and Don argue, Gerry finally accepts his fate. They believe their time on the show was a disaster, but are happy to have gotten the chance at some publicity and new supporters.

The Best Friends find out they're going to Paris.

The Police Cadets receive tip from the Don Box.

The Ice Dancers overtake the Cadets.

The Ice Dancers explain they always smile due to being sports stars, and that it's painful.

MacArthur becomes fixated in finding out if the Ice Dancers always smile.

Mickey falls off the moped.

The Fashion Bloggers talk about their shopping spree at Morocco.

Jen tells Tom to throw the carpet because it is slowing them down...

...but he accidentally hits Dwayne and Junior with it.

Father and Son after the accident.

...and the Rockers waiting for their flight.

The first set of teams depart for Paris.

Josee poses for the drawing.

The catacombs is the location for the next part of the challenge.

"Do you want to look alive in this?"

Taylor considers herself to be the best artist of the planet.

The teams working on their caricatures.

The teams' caricatures are judged.

Noah and Owen run through the catacombs.

Noah explains the cause of Owen's upset stomach.

The judge approves the Vegans' drawing.

The Goths accidentally scare the twins in the catacombs.

The Police Cadets are surprised to see the Ice Dancers caught up.

The Ice Dancers smile to the camera.

The Tennis Rivals continue to make jokes about each other.

The Vegans are disgusted by Owen's stink.

Owen stinks up yet another bathroom.

Tom is creeped out by the Parisian catacombs.

Jen plays with a skeleton.

Tom runs back for his shopping bag.

"Bye! You stink worse than this cheese float!"
- Josee

The Ice Dancers forget their oars in their haste to get on the raft...

...so they propel their raft by kicking.

The Police Cadets arrive at the Chill Zone first.

Owen eats the cheese until there is only one piece is left...

...and has to become the raft for his team.

Stephanie's temper is shown when Ryan loses their oars.

Tom is worried as Jen makes a "huge sacrifice" for the team.

The fourth through sixth...

...and eleventh through thirteenth placing teams.

The Tennis Rivals taunt the Vegans.

Owen and Noah wait for their penalty to finish.

Gerry carrying the cheese to the Chill Zone.

A snail is seen passing the Tennis Rivals as they advance to the Chill Zone.

The Pros and Tennis Rivals tie to the Chill Zone...

...but the Tennis Rivals are the ones eliminated because Gerry's foot was not on the carpet.

Retrieved from "https://totaldrama.fandom.com/wiki/French_is_an_Eiffel_Language?oldid=1581730"
Community content is available under CC-BY-SA unless otherwise noted.