From Badge to Worse 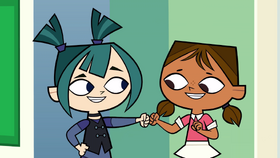 A girl scout is determined to earn her final badge but the task requires her to be friend with the lone wolf of the class. Can she overcome their creepy habits in order to claim their prize?

Duncan, Harold and Owen are getting to play their favorite game, "Sniff It Till You Barf", where they sniff disgusting moldy foods until all but one ends up throwing up. Before they begin, Courtney comes by and places smiling stickers on them, claiming they're her friends, even Duncan. The boys ask her what she's doing, and she tells them she's trying to make a new friend so she can earn her final Wilderness Girl Badge. She has collected every other badge, including one where she removed her own appendix, being the only scout to do so, and making a new friend is all she needs to do to complete her badge collection. None of the kids know what will happen if she completes the set. Owen guesses she'll get a lifetime supply of cookies, Duncan guesses she'll get a party on a yacht, and Courtney guesses they will build a statue in her honor. As she goes off, the boys begin their game.

Courtney sadly realizes she's already friends with everyone at daycare, but Gwen assures her they're not friends. To test her, she asks Courtney some questions about her, none of which she gets right. Put off by her creepy demeanor, Courtney decides to put Gwen aside and think of a plan B. Meanwhile, Owen wins Sniff It Till You Barf and retains his champion status.

Courtney decides to try befriending other things other than people. She asks a magic 8 ball if it'll be her friend and it answers no. She tries hugging a sentient tree, but the tree doesn't like it. She tries befriending Richard Swimmins, but the Wilderness Girl committee calls her saying that befriending a fish doesn't count, much to her annoyance. Out of options, she decides to try Gwen. Gwen does not like the idea of being friends with Courtney, but Courtney assures her she can be fun. Gwen decides she will give Courtney a chance on the condition they play Gwen's way. Courtney is willing to go through with it.

Meanwhile, Owen watches Harold and Duncan play another round of SITYB, which will determine who will be runner up.

The first thing Courtney and Gwen do is a game called Monster Toy. Gwen breaks toys, mixes the broken pieces together, and fuses them into a new toy. She wants Courtney to do it. Desperate to get her badge, Courtney follows suit and breaks the toys. First, she accidentally fixes them. Then after another failed attempt, she manages to make a monstrosity of a toy, making Gwen think a friendship could work after all. Next, they take worms and put them in a boom. Gwen slams the worms in the pages and asks Courtney if worms are good for anything, and Courtney can't think of a legitimate use for them and slams them in like Gwen. Next they flick the light switch for the boys' room off. Dunca. Comes out screaming (assuming he lost to Harold) a d unintentionally reveals his fear of the dark. Gwen and Courtney flick it off again, scaring him away. They then proceed to frighten the other students, like Jude with a fake shark fin on a skateboard, dressing up as zombies and scaring Beth, and dressing up as spiders to scare Cody (who still wears diapers). Their last target is Chef, who Gwen admits is tricky. After Courtney suggests some ludicrous ideas, Gwen suggests they settle for something less extreme. They place a joke pretzel container and tie it to a horse. Chef opens the container to find that it's empty, and the girls send the horse running off with Chef in tow still holding the can. Courtney and Gwen laugh; the latter admits it was the first time she ever laughed so hard.

Gwen decides she and Courtney are now friends. Excited, Courtney asks Gwen to sign a form that their friendship is official for her Wilderness Girl status, which she neglected to tell Gwen. Upon hearing this, Gwen is shocked that that was the main reason she wanted to be friends with her and it didn't seem real, but she signs anyway because it was a "well played" idea of Courtney's.

At her next Wilderness Girl meeting, Courtney finally gets her final badge and asks when her statue will be built. Just then, a cookie falls from above and Courtney notices, to her horror, an avalanche of cookies falls on top of her. Owen comes by and announces he was right about her reward and starts eating some cookies.

Harold is performing a magic trick by summoning random objects out of his hat. Each time he waves his wand over his hat, something came out from it. First a rabbit, followed by a penguin, a bouquet of flowers and finally an angry Chef Hatchet, scaring Harold away.  Unable to find a way out of Harold's magic hat, Chef bounces off.

Harold, Owen and Duncan about to play "Sniff It Till You Barf".

Owen looks at his sandwich.

Duncan's surprised that Courtney considers him to be her friend.

Courtney tells the kids that she needs to earn a "make a new friend" badge. 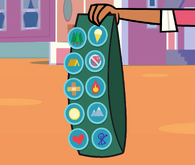 Courtney shows all of her badges to the kids.

Courtney tells the kids that so far she's the only wilderness girl to get a badge for taking out her own appendix.

Courtney attempts to take out her appendix.

Courtney has successfully taken out her appendix.

"Hey! You tricked me into doing mathematics!"
- Owen's brain

Owen thinks Courtney will get a lifetime supply of wilderness girl cookies if she earns her final badge.

Duncan thinks Courtney will get a yacht if she earns her final badge.

Courtney thinks she will get a massive statue of herself if she earns her final badge.

"Get out of here, bird! Nobody poops on me!"
- Courtney

Courtney thinks that if she makes one more friend, she will make history.

Harold, Owen and Duncan start to play "Sniff It Till You Barf".

Courtney gives a friend sticker to Cody, Jude and Beth.

Gwen tells Courtney that they're not friends.

Courtney gives wrong answers to all of Gwen's questions.

Courtney gets creeped out by Gwen.

Courtney tells Gwen that she will think about wanting to be her friend or not.

Owen wins the "Sniff It Till You Barf" game.

Courtney wants to become friends with something other than people.

Courtney tries to become friends with a toy.

But the toy declines.

Courtney tries to become friends with a tree.

But the tree also declines.

Courtney gets told that she can't become friends with a fish.

Courtney wants Gwen to get out of her egg chair.

Gwen says that she had a friend once, but they're not friends anymore.

Gwen after Courtney tells her that they can play whatever she wants.

Gwen thinks her friendship with Courtney could be fun.

Gwen tells the rules of her first game..

Courtney imagines Chef telling her that she doesn't have to break daycare property.

Courtney also imagines Gwen telling her that she does have to break daycare property if she wants to earn her final badge.

Then accidentally repairs them instead of making a monster toy out of them.

Courtney's reaction when Gwen tells her that they really could be friends.

Gwen tells the rules of her next game to Courtney.

Courtney tries to think of a better thing.

Courtney imagines herself playing baseball with a worm.

Courtney and Gwen start to play the latter's favorite game.

A scared Duncan runs out of the bathroom.

"Did Gwen tell you that I'm afraid of the dark? Because I'm not!"
- Duncan

"This was supposed to be our secret!"
- Duncan to Gwen

Courtney tells Gwen that she really likes the game.

Gwen and Courtney after they successfully scare Jude.

Courtney and Gwen decide to dress up as zombies to scare Beth.

Beth gets scared by Courtney and Gwen.

Gwen and Courtney after they successfully scare Beth.

Courtney and Gwen decide to dress up as spiders to scare Cody.

Cody gets scared by Courtney and Gwen.

Courtney thinks that she and Gwen should seal Chef in his office.

Chef opens an empty can of pretzels.

Courtney and Gwen about to prank Chef.

Chef gets pranked by Courtney and Gwen.

Courtney's reaction after Gwen tells her that they're friends now.

Courtney wants Gwen to sign her verification for "make a new friend" badge.

"So, all this time, you were just using me?" / "Gaining my trust, tricking me?" / "Assuming that I wouldn't be furious when I found out the truth?!"
- Gwen

Courtney gets scared by Gwen.

Courtney gets rewarded with a lifetime supply of wilderness girl cookies.

Retrieved from "https://totaldrama.fandom.com/wiki/From_Badge_to_Worse?oldid=1632264"
Community content is available under CC-BY-SA unless otherwise noted.